Who are you? Where are you living?
Taylor Lindschau, Victor Harbor, South Australia.

When and how did you start collecting?
Been collecting for around 15 years but really stepped up collecting in the last 5 years. It’s really is interesting to see the progression and the innovation of how shapes have evolved and now heading back the opposite way. I’ve tried to capture that when I’m collection or I see something that I’m missing in a linage. Plus I love those experimental shapes.

Which was the first board of your collection?
My first board was a Greg Frost (frosty knows best) beautiful single fin with triple flyes and swallow tail. 6’2” with a huge amount of volume in the chest and beaked nose.

How many boards do you have?
At the moment I think it’s a roundabout 110 but it depends if I’ve got time with work and I can dedicate time to restoring and tidying them up. Most I’ve had is a 150, I need a bigger shed! 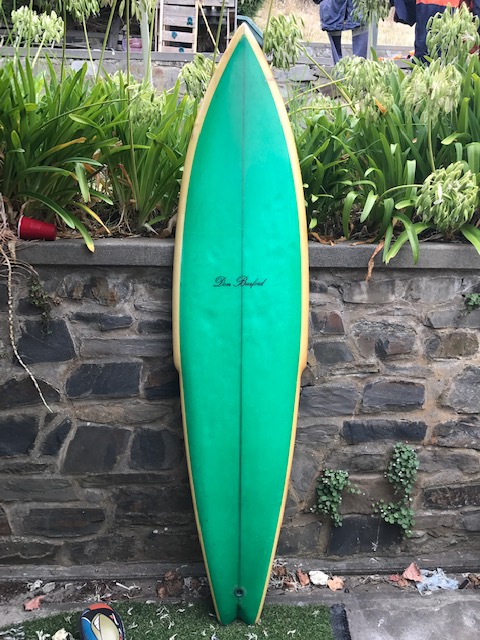 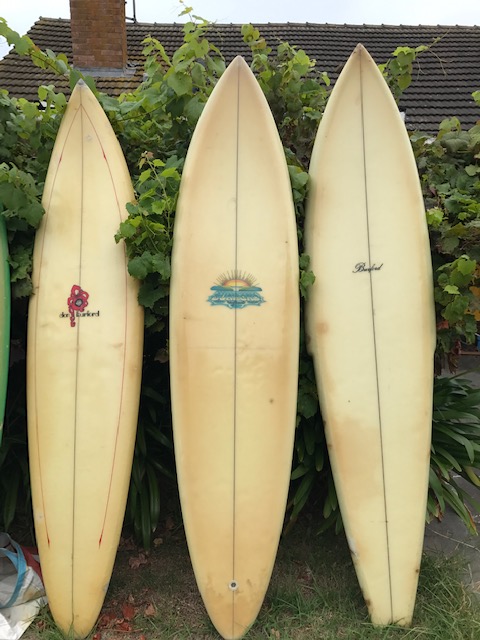 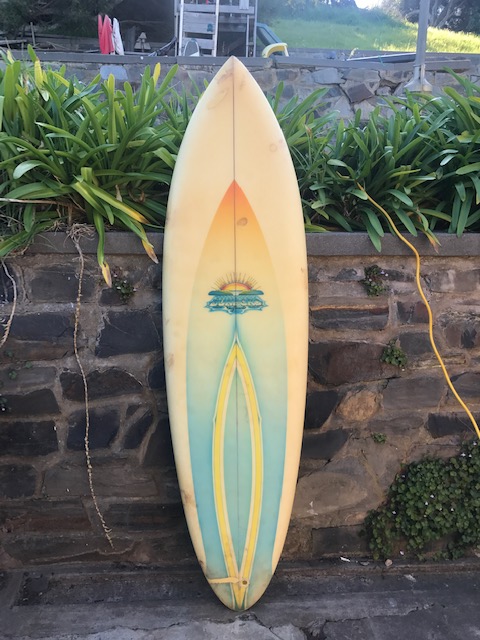 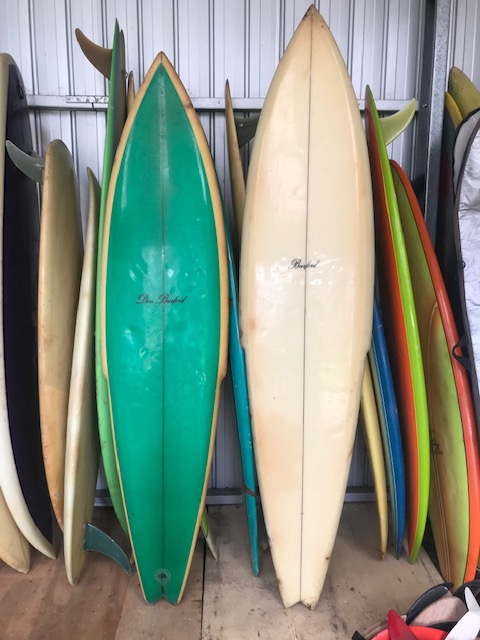 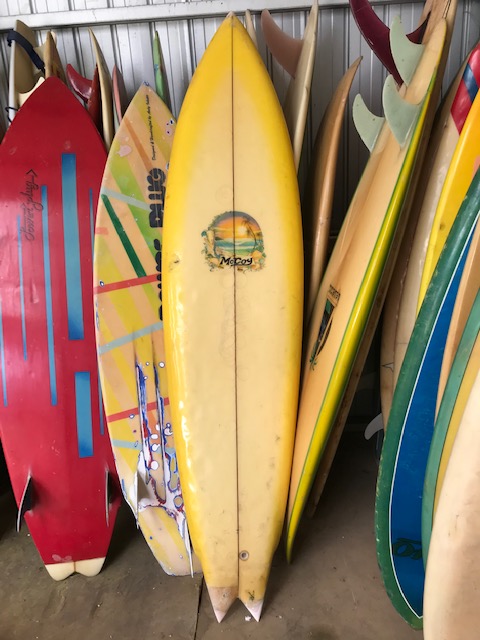 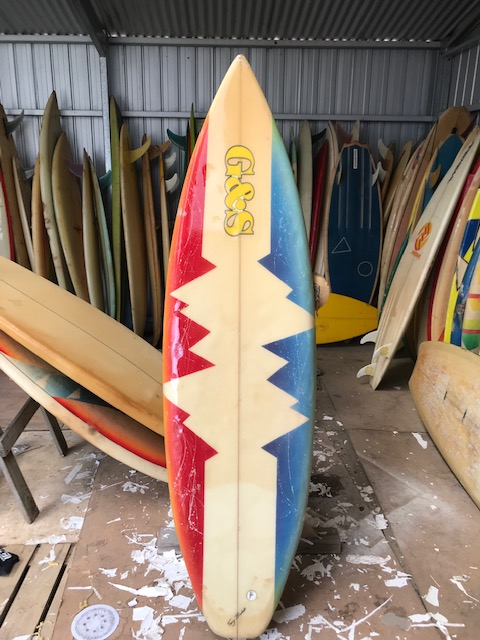 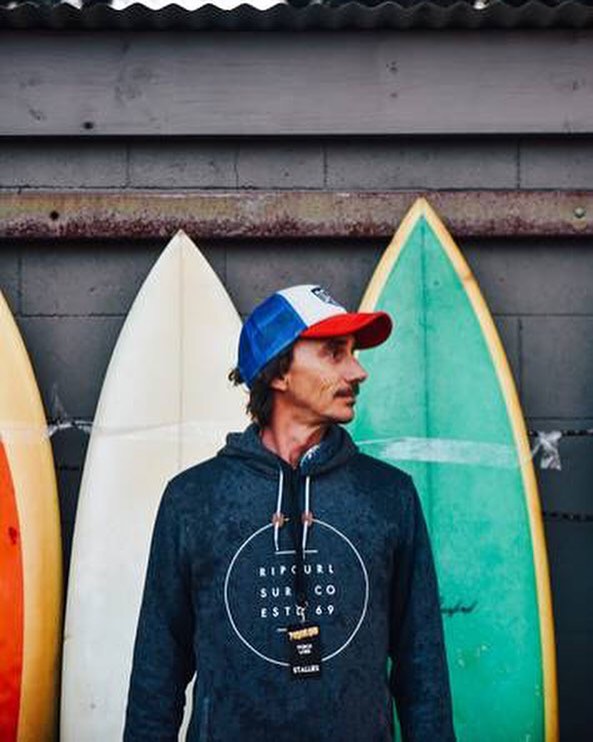 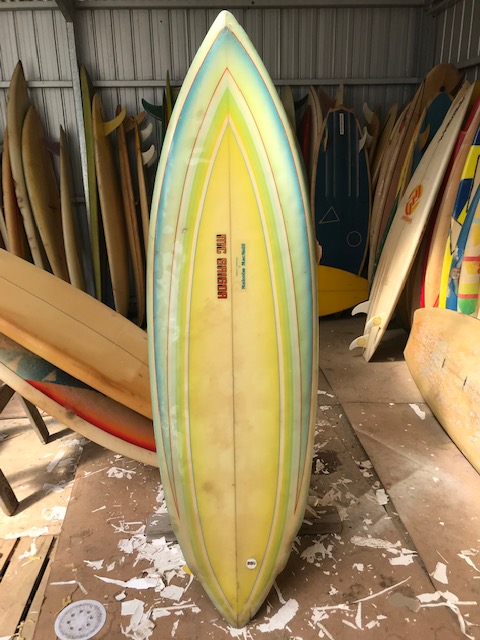 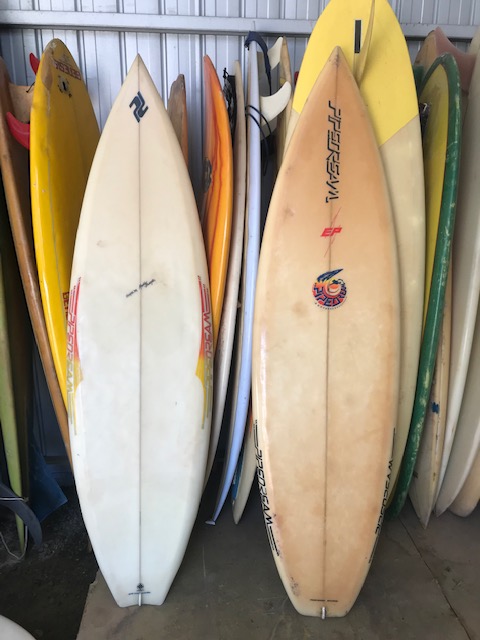 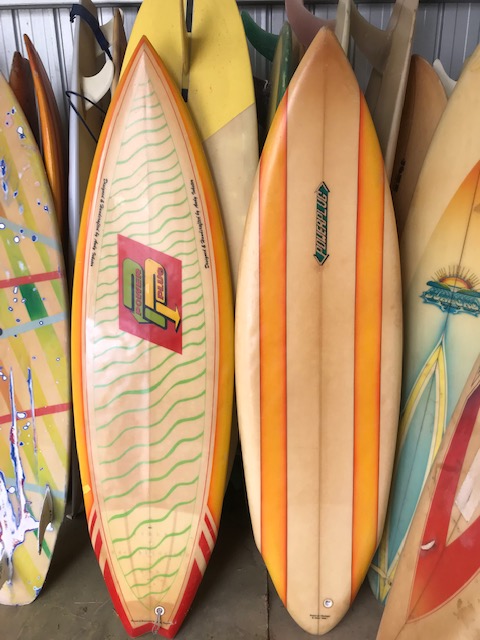 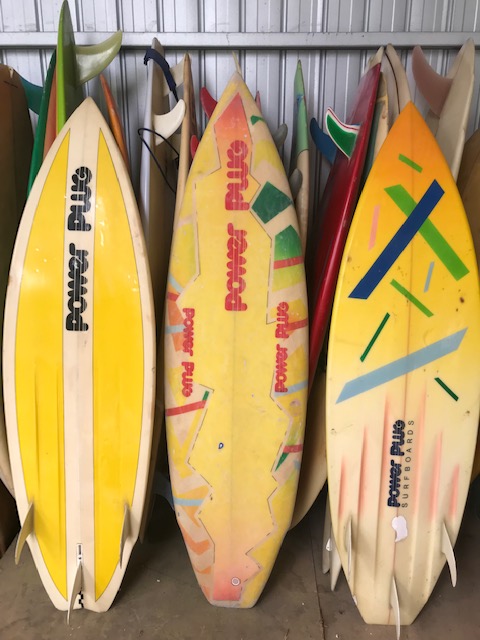 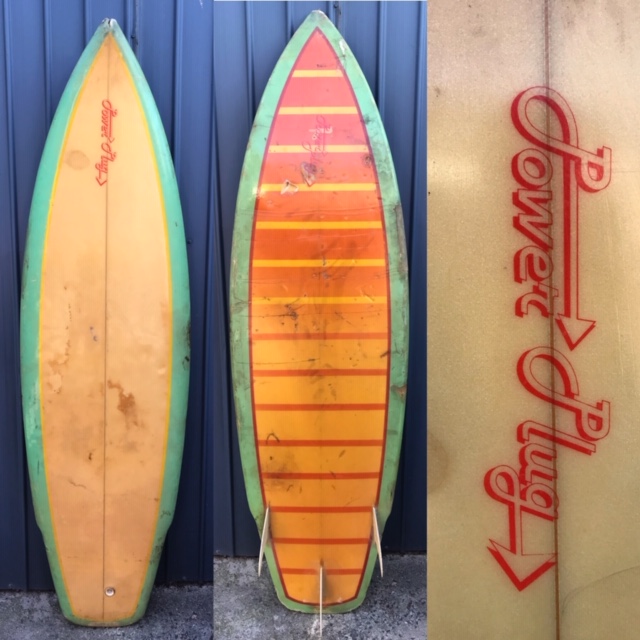 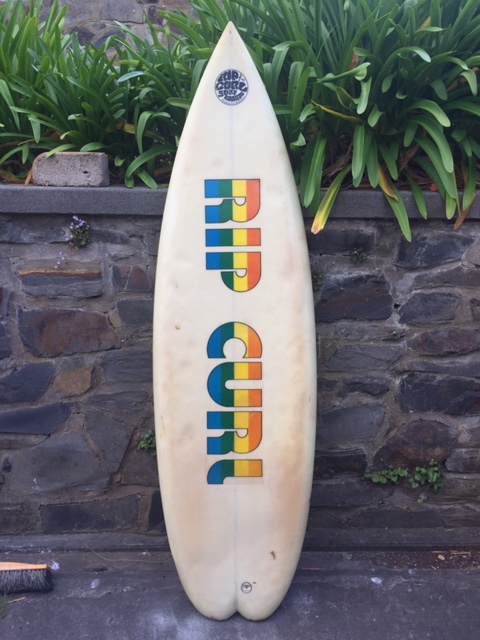 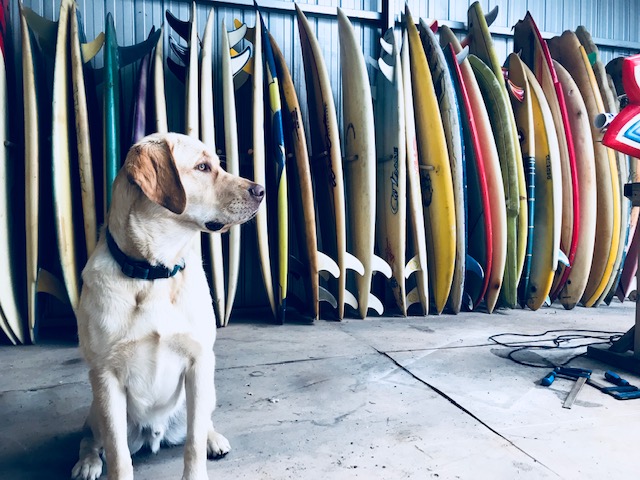 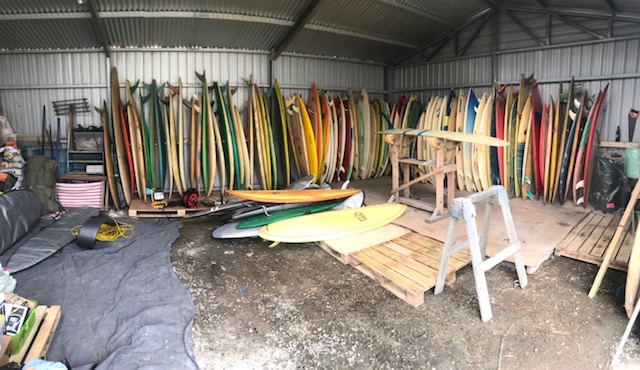 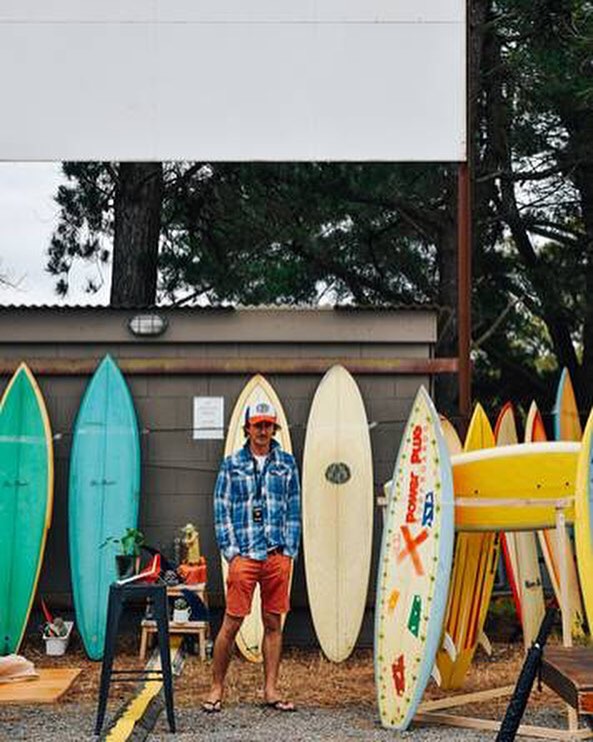 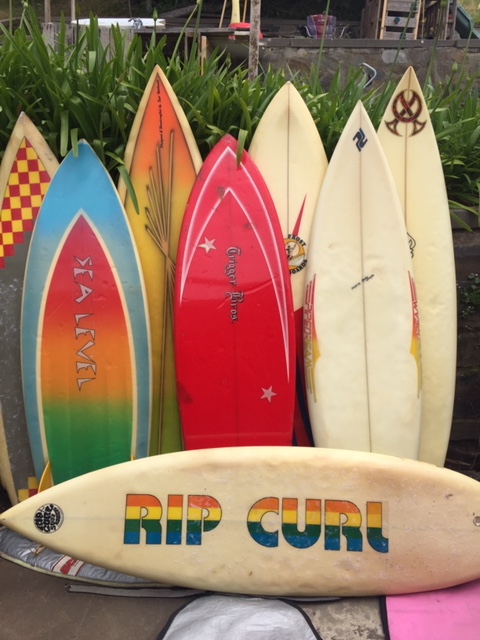 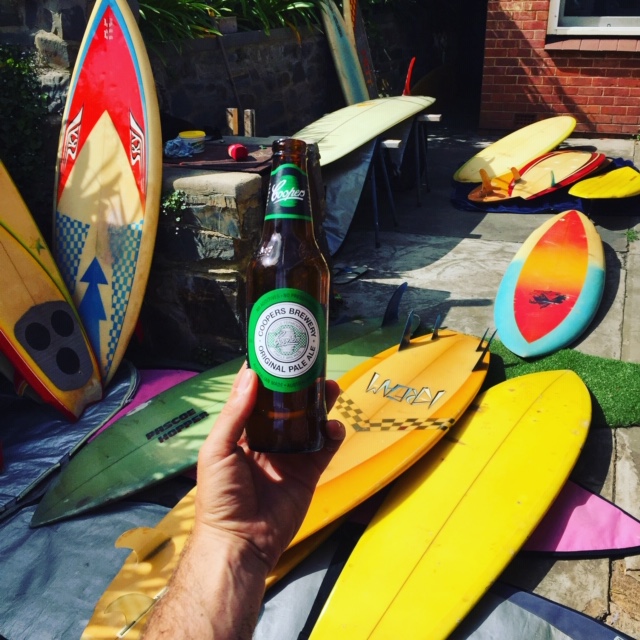 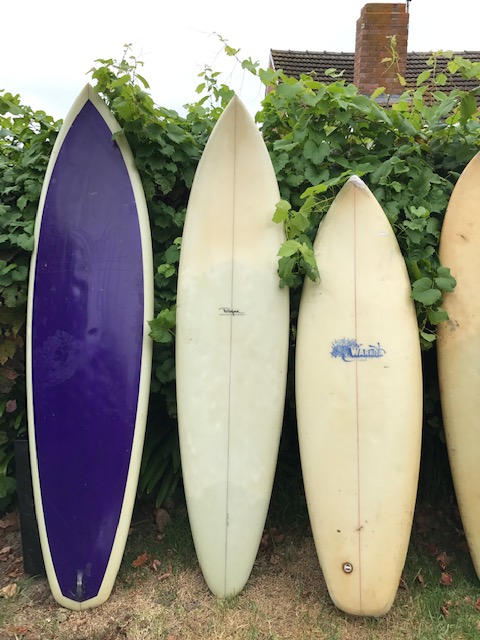 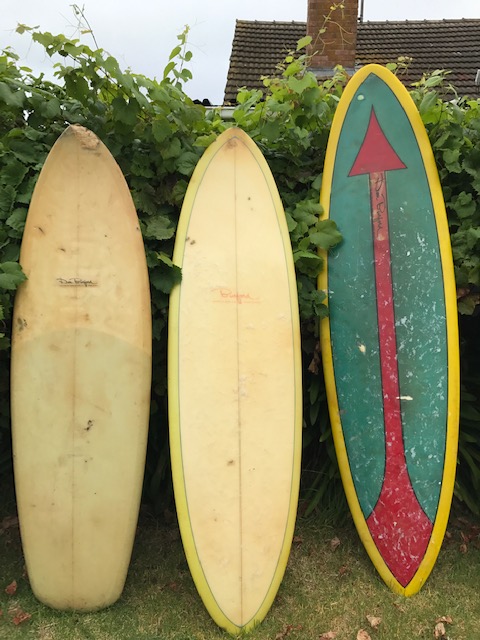 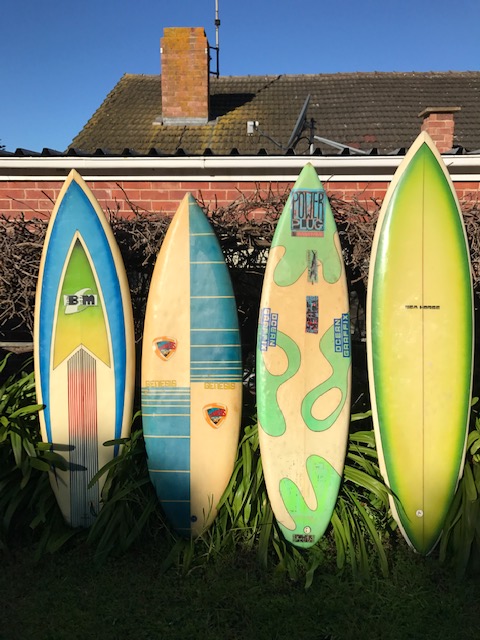 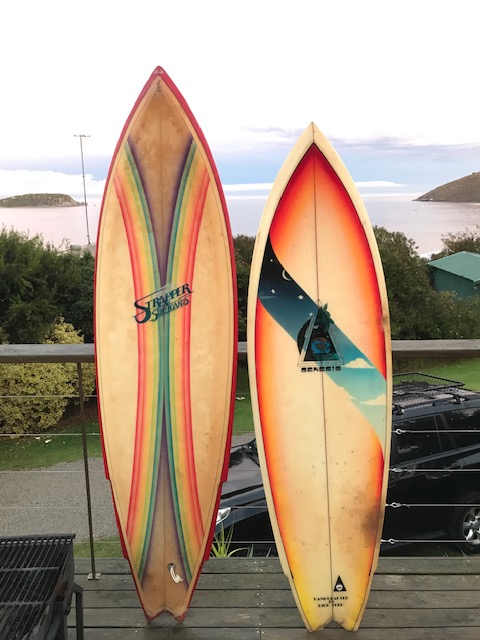 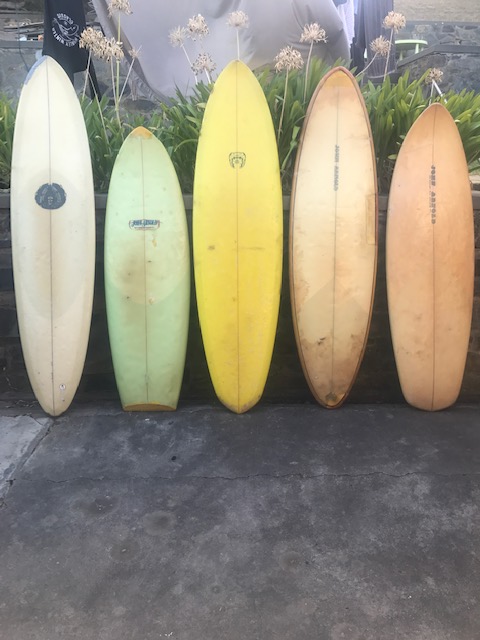 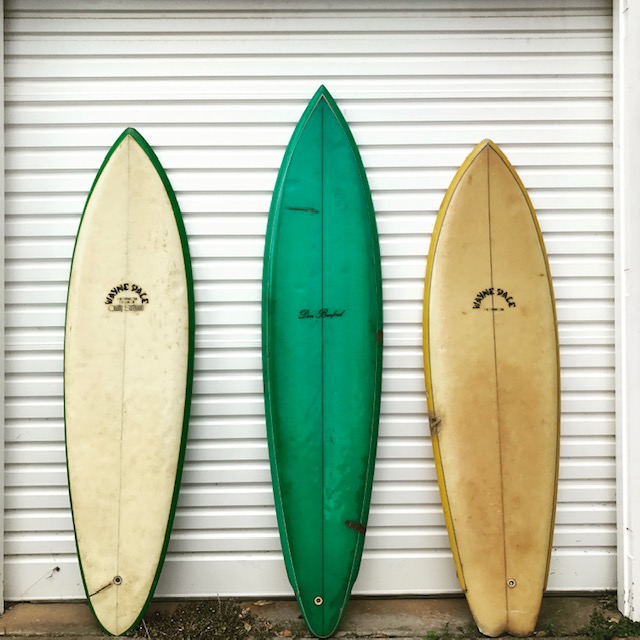 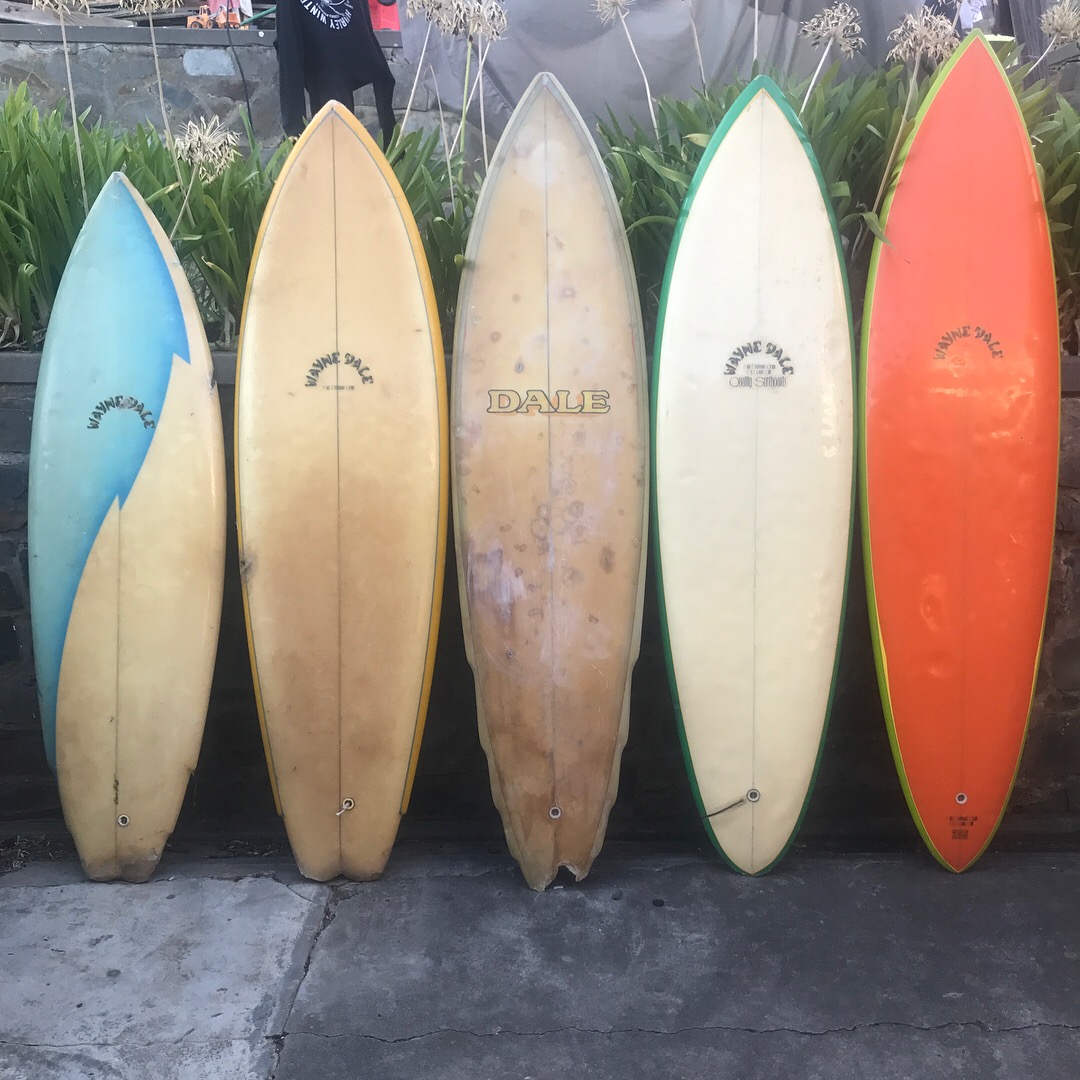 Which is now your most preferred board?
It’s like naming your favorite child… It would be a the John Arnold single (waveset)fin, shaped by Les Purcell. 6’6” with a decal that has Wayne Lynch head on it but all the words trimmed out of the decal. Knife like rails and involvement shape, the thing is a bullet.

Are you surfing your vintage boards?
Yeah always, I’m shocking when I go surfing now, my biggest headed ache is making sure I don’t take six boards with me, then the battle of which one I surf.

Which one do you like to surf most?
There’s three I constantly cycle through, depending on swell:
A 6’3” single fin McCoy with a single fly’s
9’ McDonagh vee bottom
6’2’ Genesis twin fin

Who is your favorite surfer from the 60’s-90’s and why?
I grew up on watching Luke Egan, Neal Purchase Junior and Occy, being a Goofy you tend to follow them because you are trying to emulate their style. Tom Carroll too, the image of the snap under the lip at Pipe Masters will be an iconic surfing image for eternity.

Who is your favorite shaper from the 60’s-90’s and why?
Wayne Dale he shaped for most of the factories in South Australia, John Arnold, Burford, Southern Surf Center and under his own label, from transitional shapes, seventies singles and twinnies.  It’s like you know it’s a Dale when you put one under your arm, weight and shape, a few times I’ve seen a couple from a distance and picked it from a fin or a rail shape.
Another shaper and happy to call a friend is Andy Inkster, his shapes of early 80 thrusters are weapons, little pocket rockets, hard rails and squashed square tails, mental sprays… just love them and soooo much fun to ride… as if you can’t tell.
Neal Purchase Senior as well with his run at Burford, think I have over 20 of his boards, a huge 7foot plus sting, seventies singles, twinnies and deep channel thruster with an Egan spray.

Where can we see your boards?
Look if you are ever in the area, 80kms south of Adelaide is home. So just message on Instagram and we could organize something. I do local festivals and board shows also a cycle a few boards through a friend’s studio in Somerton Park (Summertown Studio) it’s just around the corner from the old Burford factory.

Last words:
One day I hope to have a space where people can come an have a beer or coffee and lose an hour or two looking at boards and understanding the history of surfing in South Australia and the men and women behind it. One day…