Geoff McCoy legendary and sometimes controversial surfboard designer and shaper. World renowned for his cutting edge designs and for building equipment for many of the surfing worlds elite surfers.
Here is little of the background story on this man and his lifetime of dedication to his craft.

Who are you? Where are you living/surfing/shaping?
I am Geoff McCoy. I live and shape in Byron Bay Australia. I surf the Local breaks regularly, with surf trips up and down the East Coast of Queensland and N.S.W. and occasionally Victoria and Western Australia. I surfed and shaped extensively in California, Hawaii and Japan.

When and how did you start surfing?
I started surfing on my cousins 16’ paddle board at Avoca Beach, N.S.W. Central Coast area. I was 14 years old when I started. At 15 my father bought me a balsa board 9’, that I surfed for a couple of years then I got my first foam board a Barry Bennett which was also 9’.

When and how did you start shaping?
I served my apprenticeship as a wood and metal pattern maker and by the time I finished my 5 year apprenticeship I was surfing weekends and holidays. I became interested in shaping after reading an advertisement in a surfing magazine saying that the moulds for the blanks were made by a Pattern Maker. This got me thinking maybe I could get involved in the surfboard industry. I quit my pattern making job 1 week after completing my apprenticeship and started working as a finish coater for a company called Ron Surfboards and 1 month later there was an opportunity to start shaping so I took it and my shaping life began.

Do you remember the first board you shaped?  How was it?
I have no clear memory of the actual board; I remember that I watched a couple of the other guys and just got into it. It would have been a multi stringer mal over 9’ as in 1963 that was the only style of boards that was being made. It must have been OK because I continued to shape for the company for a few years, shaping 8 mals a day. I was then offered a job with Barry Bennett in 1967 who was the prominent big name at that time. It was while I was shaping at Bennett’s and surfing at North Narrabeen that I introduced my first surfboard design, the double ender, which was the very first Board under 6’. It was a big success and gave me my first real acclaim as a surfboard designer. 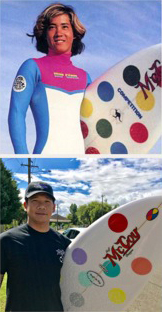 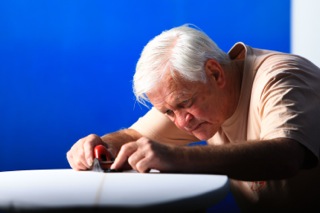 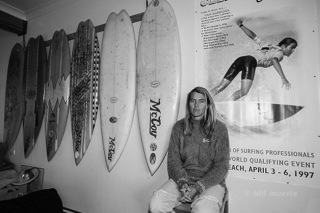 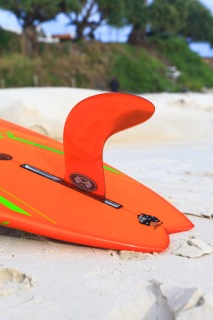 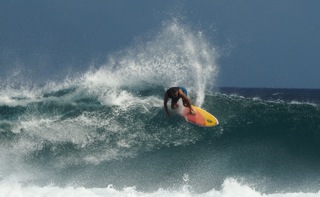 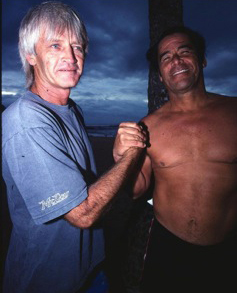 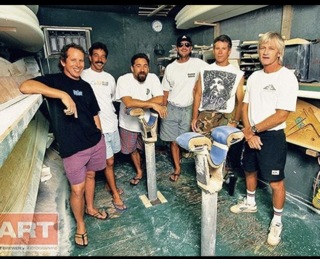 Which surfer had the biggest impact on your shaping?
Me. Surfing was my Life, my passion, I wanted to be riding the best equipment that I could design and shape. It is very difficult to name one other person but Wayne Burton who was the top shaper when I went to work for Bennett gave me lots of valuable basic knowledge. I was a sponge for surfboard design knowledge so there were many contributors over many years. Nat Young even though he was and is not a recognised Shaper, told me that in his opinion the rails of the board were effectively planing areas the same as the bottom of the board. Midget Farrelly for whom I had great respect talked to me and showed me many aspects of surfboard design and function, as outline (plan shape), balance, nose to rail. Gerry Lopez told me about rail shapes (hold, release), Barry Kanaiaupuni, how to build speed (bottom rocker). Reno Abelliro, shaping style into the board.
There have been so many contributors it is impossible to name them all. I could say working with many of the World’s elite surfers and many, many other great surfers, each of them has contributed in some way to further my design knowledge as there were never two with the same needs when there was such a wide range of abilities and styles. After many years of study, research and experimentation in a wide range of design aspects and their function I stopped looking at other designs and became clearer with what I myself had learnt through this extensive process and focused on my designs which I still do to this day.

Which is the best board you have ever shaped back in the days? Who for?
Probably not the best board that I have ever shaped but the one in which I had a total design epiphany is the now Iconic Lazor Zap. The narrow nose, wide tail was a forerunner of modern surfboard design.  The Lazor Zap will forever be synonymous with the great surfer Cheyne Horan and he was the inspiration that drove me to design the Lazor Zap.
I have been fortunate to be able to design and build many surfboards for many great surfers over my career.
My Designs since then have evolved into my current range of Nugget Surfboards, which have been much more accepted and are incredibly versatile and popular as they surf a very wide range of conditions. Although I have to say that I still make Lazor Zaps, Phase 2 which account for around 1/3rd of my production. It is a much more refined user friendly version of the Phase 1.

Which was the most important era for you?
All I can say is I started in the early 60’s. I have been fortunate enough to be able to enjoy a career in doing what I love to do most. Surf and design and make Surfboards. Since the beginning it has been a continual design evolution for me. There is no one “important” era as my life and my learning and knowledge and the depth and application of that continue to this very day.

Who is your favorite surfer from the 60’s-90’s and why?
I have been fortunate enough to know and also to surf with a lot of great surfers. It would be totally unfair of me to single out 1 Surfer. I loved the camaraderie that we had when we were out surfing together; remember the essence isn’t about winning contests it’s about going out and ripping in some great conditions with your mates.

Who is your favorite shaper from the 60’s-90’s and why?
This question is too difficult to answer, as I said earlier I was initially influenced by a lot of great shapers, worldwide.

Last words:
Throughout my career as a designer/shaper my focus has been on myself and constantly improving the overall performance of a surfboard. I don’t see a lot of real progress in the surfboards that are around at the moment. They in general seem to be designed to have a limited performance range and also life expectancy. This is obviously fuelled by business and not by the purism of creating really good design and functional equipment that anyone can ride, not just a few elite surfers. My focus is on creating good design, functional equipment which has stood the test of time. It is not over for me; even now I am working on a new model.