Dominic from the Gold Coast started collecting surfboards only 4 years ago with the intention to build a vintage quiver, now he is one of the few riding 90% of his colletor items.

Who are you? Where are you living?
I am Dominic Youe. Originally from Devon in South West England and following a few years of surfing around the world, I have settled on the Gold Coast, Queensland Australia. We have pretty warm water and consistent surf throughout the year, sometimes world class waves.

When and how did you start collecting?
I bought a 1980’s Peter “Chops” Lascelles shaped Rip Curl Minimal in a surf shop in Bristol England in 2008. I surfed it to death (creased it twice, snapped it once) having found out that the extra volume really worked for me. I also liked that it had triple fin boxes, which allowed for a variety of fin combinations and is a feature in recent customs that I have had made, and the 80’s graphics which are cool.
My collecting actually started after I moved to the Gold Coast and I bought an old Malon fish (shaper unknown) from a recycling centre for about $30 around 4 years ago. I then realized that I could build a quiver from older boards for a fraction of the price of new boards, which was my goal and I didn’t then think of myself as a collector.
I started to buy pretty much any cheap old board that I could find, before realizing that there was a bit of a scene and people that I could learn information from, trade with and generally share the stoke. I have met some great guys and made some good and broad connections from the collecting scene and shared a lot of stoke.
Over the following few years I put a lot of search hours into finding boards and trading boards and learning about the history, as well as surfing a lot of different craft and finding out what boards work for me and really appeal to me as “keepers”. It was a bit of an obsession for a while and having built my quiver, I’ve pulled back some of the time that I had dedicated to surfboard collecting.

Which was the first board of your collection?
The first board of consequence that I added to the collection, which I still have, is a Terry Fitzgerald shaped, Steve Wilson Dark Horse Design, Hot Buttered 1st Gen Thruster with epic chequered spray. It is one of the few boards that I have kept that isn’t a surfable size for me, and had no idea that it would be quite desirable to collectors at the time. I just felt that it was something special and didn’t want to let go of it, despite being my most expensive purchase at the time ($300au). Photo attached

How many boards do you have?
I think I have around 40 boards now. I have bought around 250 in the last few years and traded and refined to 40 boards, that are mostly in good condition and riders for me.
I found that there are some really good surfable Mals from the mid – late 60’s, so I have few of those that I like to surf the points with mostly, or uncrowded mellow banks. As with all boards they seem to work better in clean waves, drawing long lazy lines and don’t adjust well to chop or crowds (heavy) but they will fly when they set up right.
I have a couple of early 80’s thrusters, which I don’t surf but are good quality shapes, so I’ll get around to surfing them and a couple of twinnies.
I have a pretty good quiver of single fins from around 1979-81. I really like that period for single fins, because they had the plan shape sorted and they actually surf really well. The visuals appeal as well. I like boards with a bit of meat through the middle and under the chest, that don’t get narrow too fast towards the back, as I find they work best for me on peaky beach brakes. It’s been a challenge to find good riders in my size as I am 6’5 and 95KG and a lot of nice boards from that period are under 6 foot. 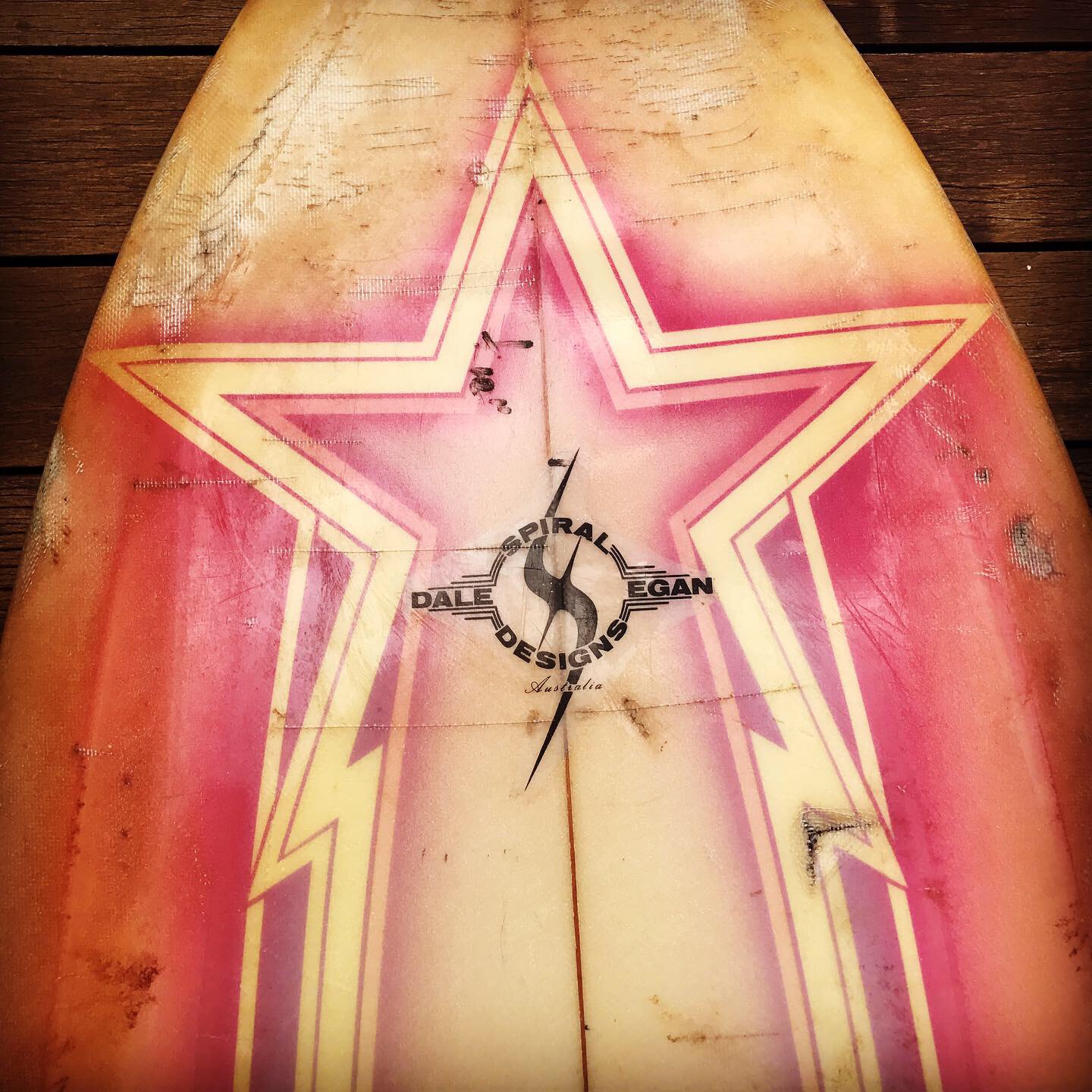 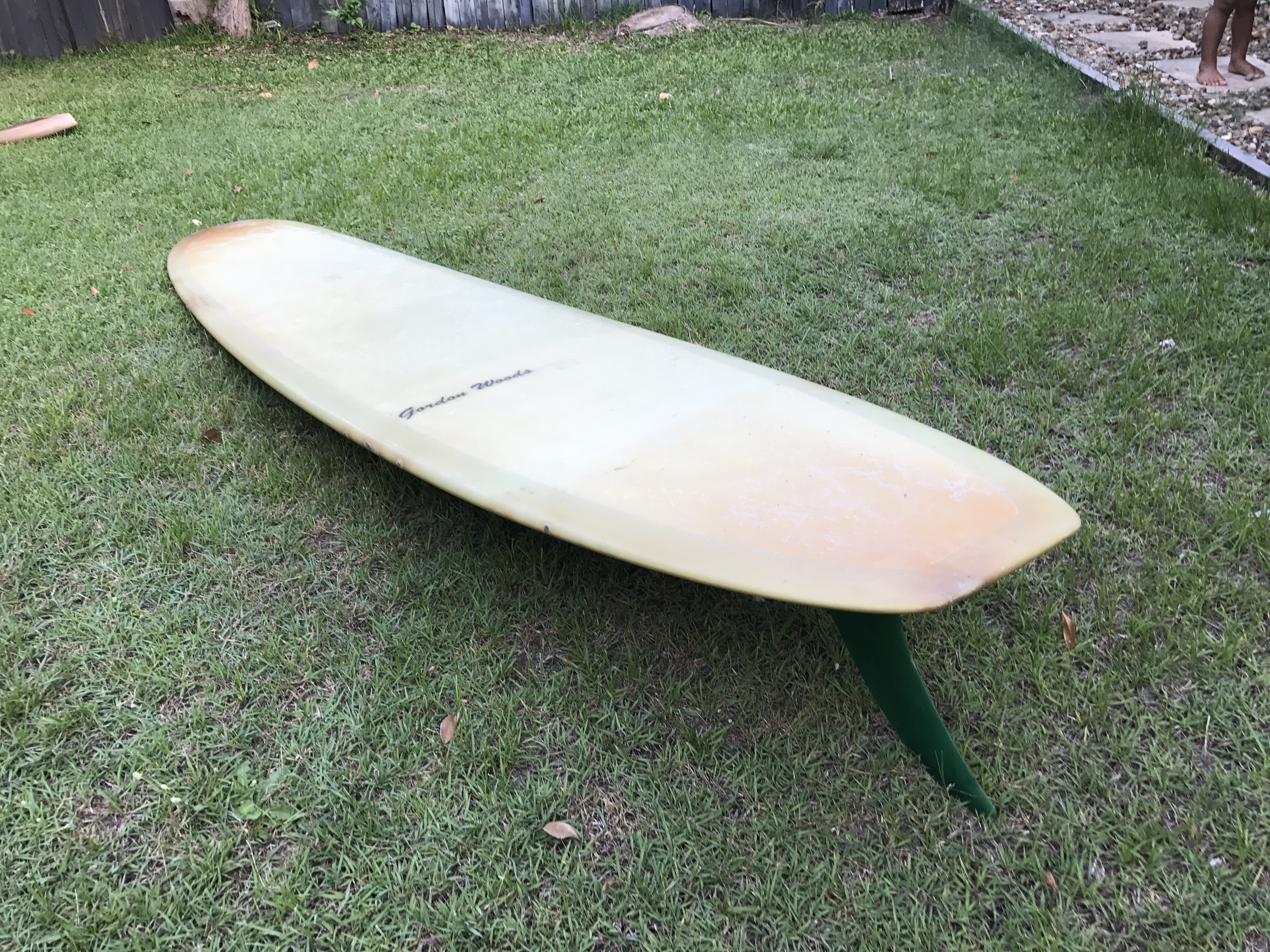 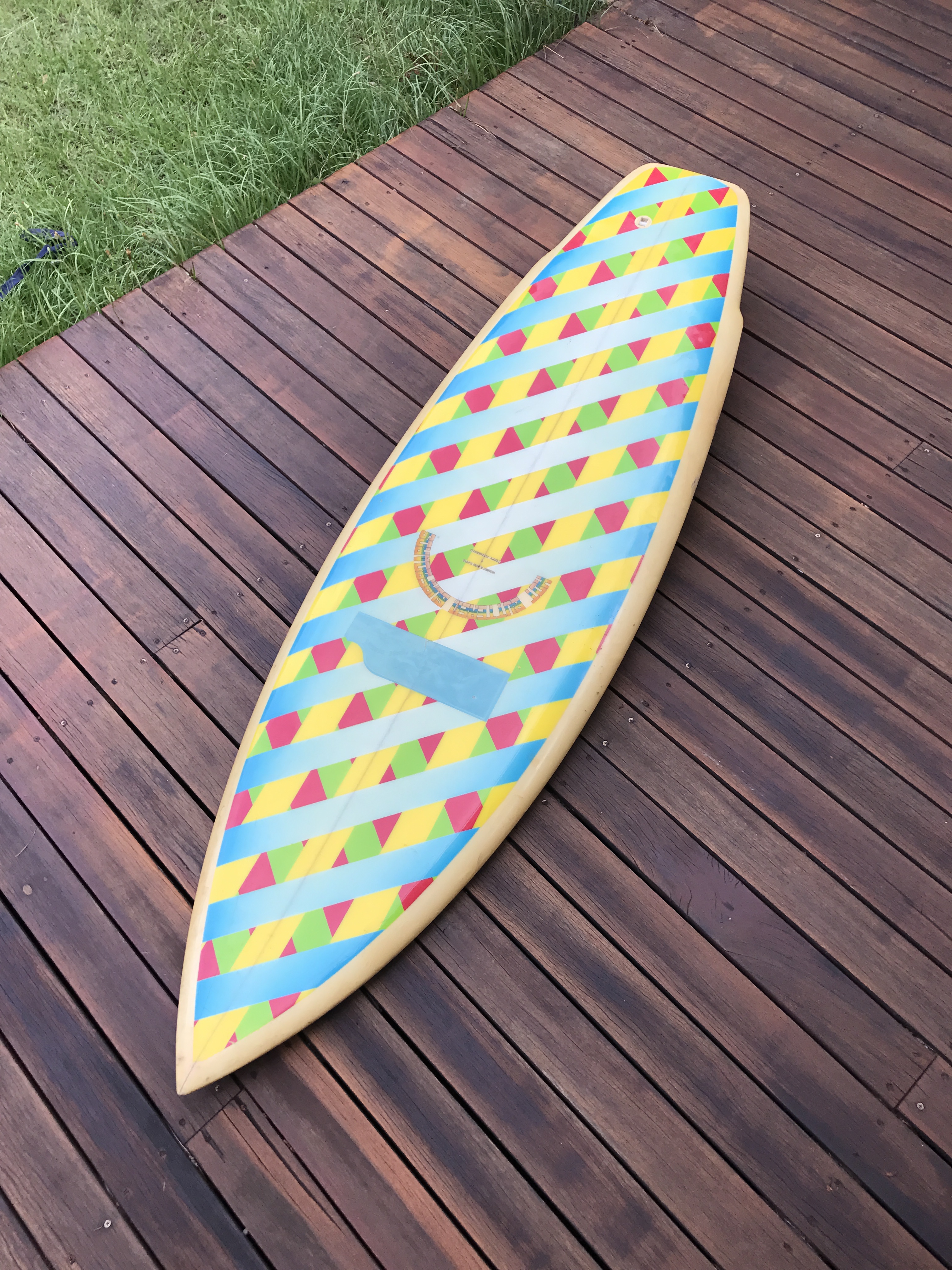 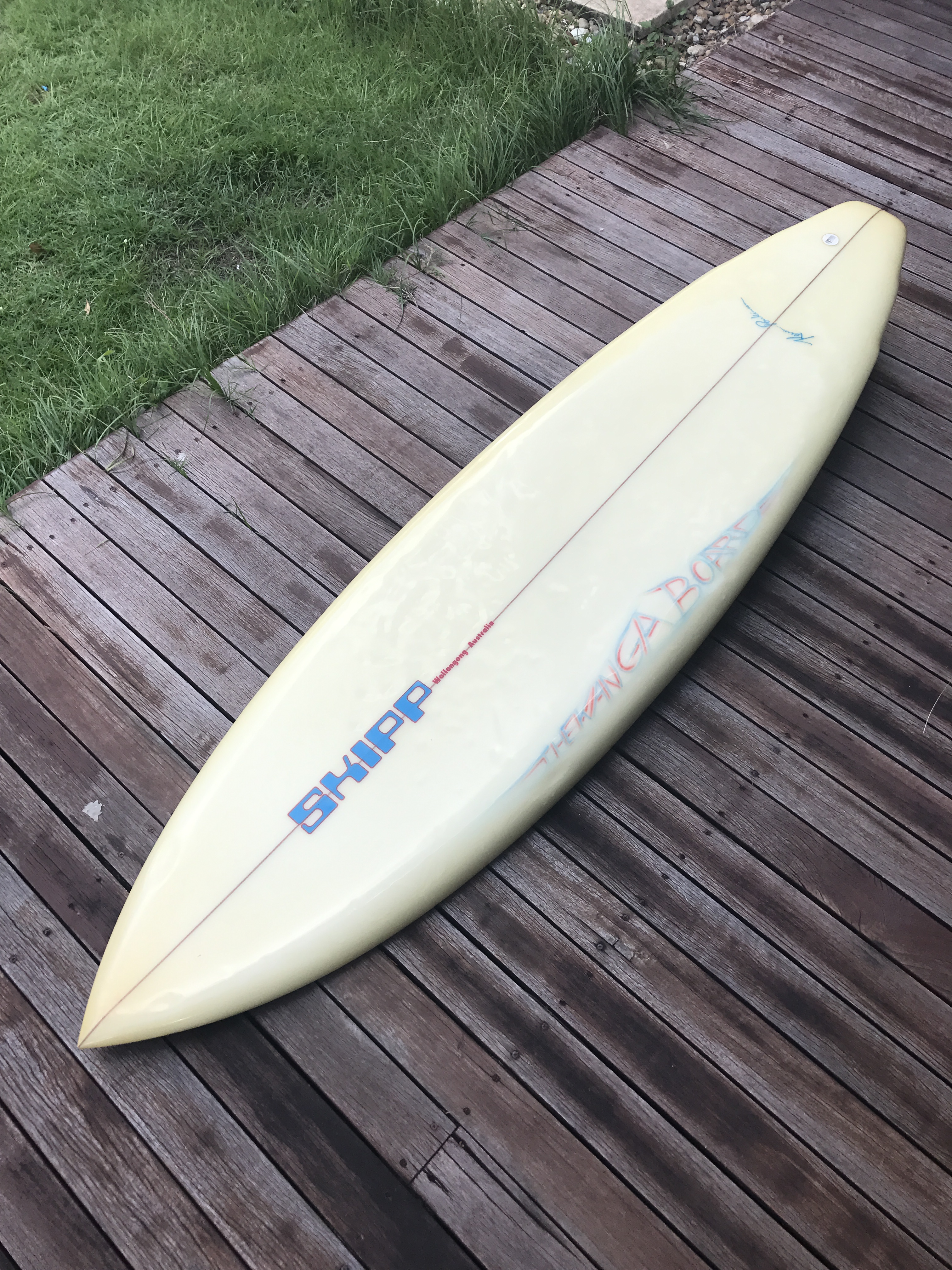 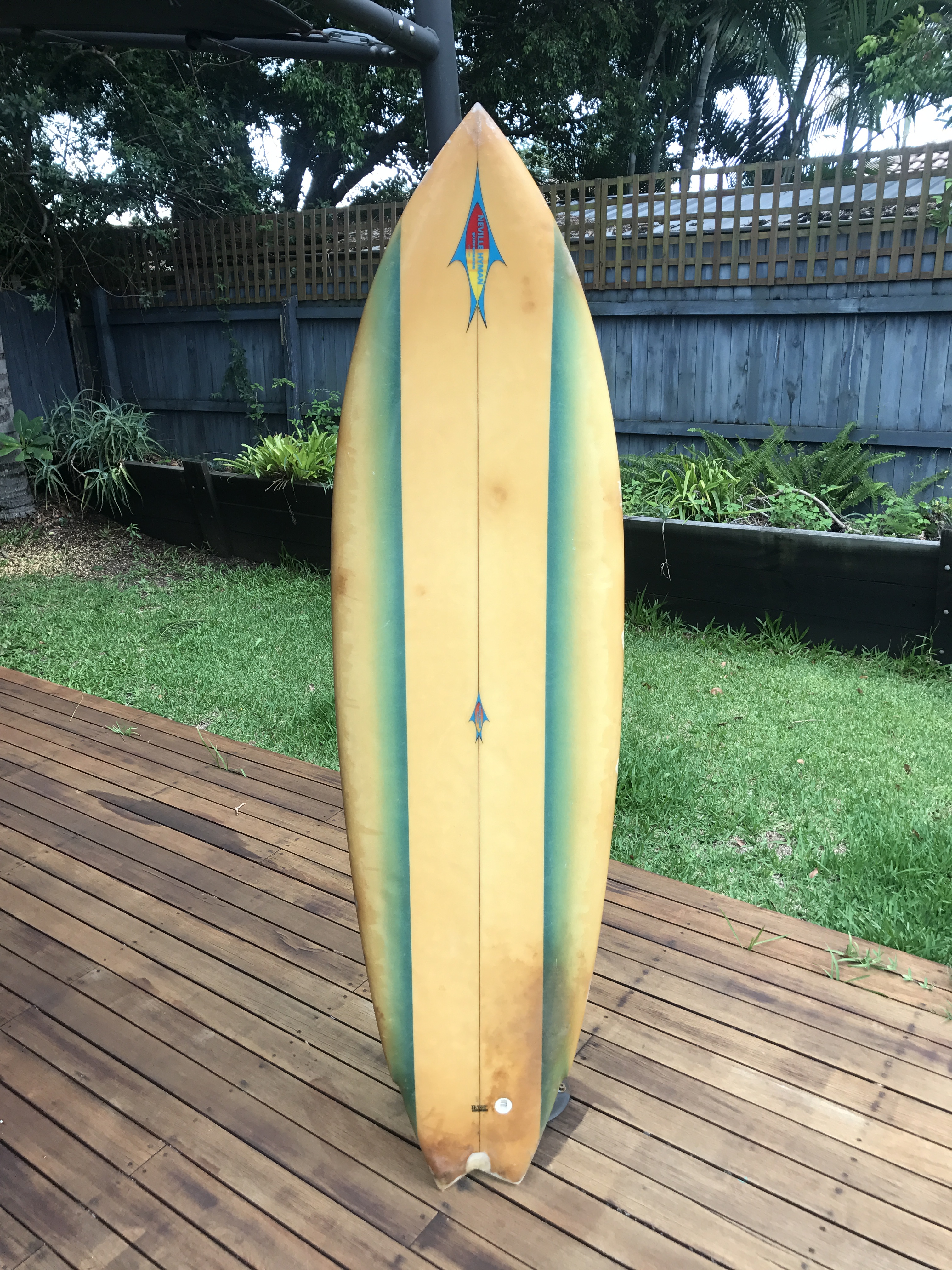 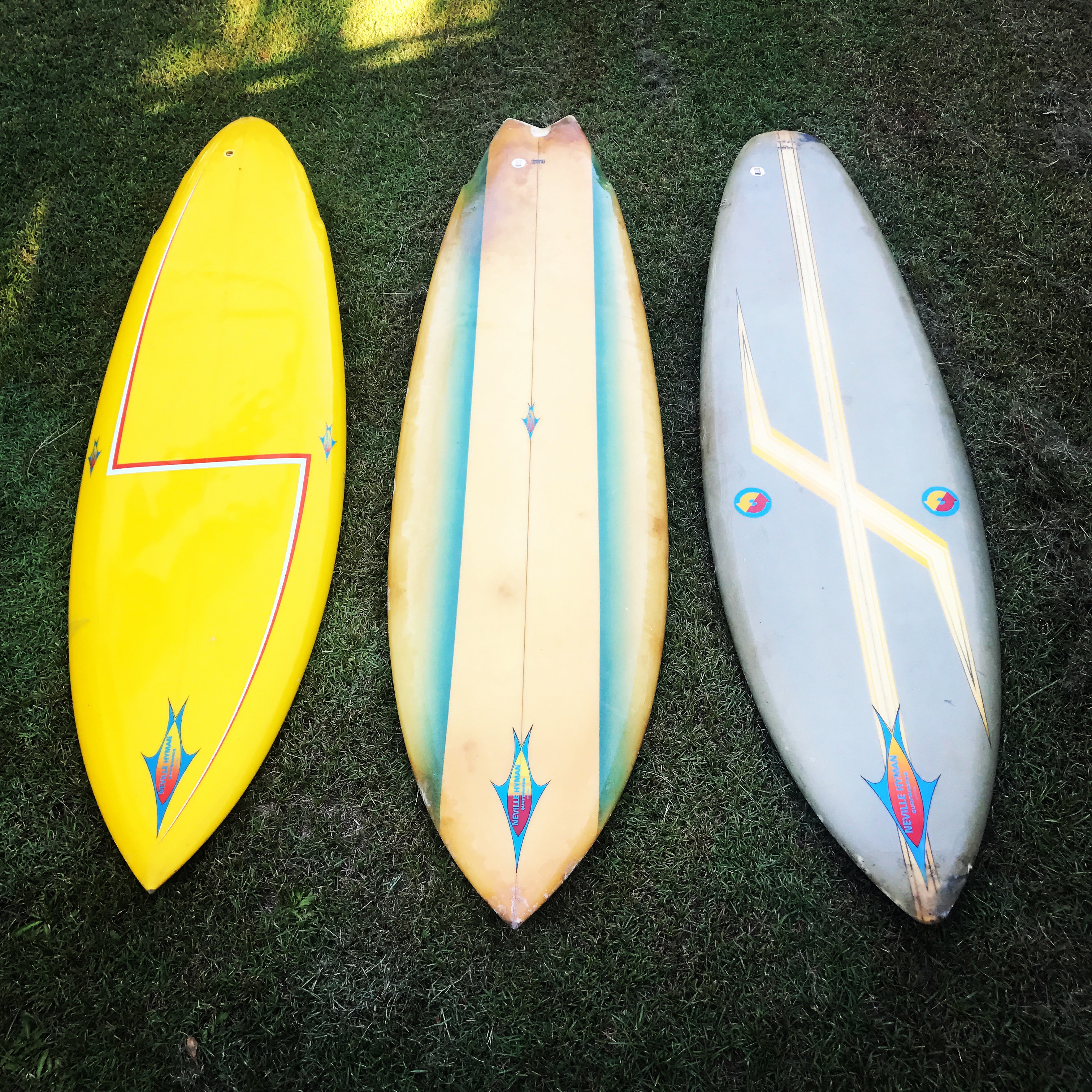 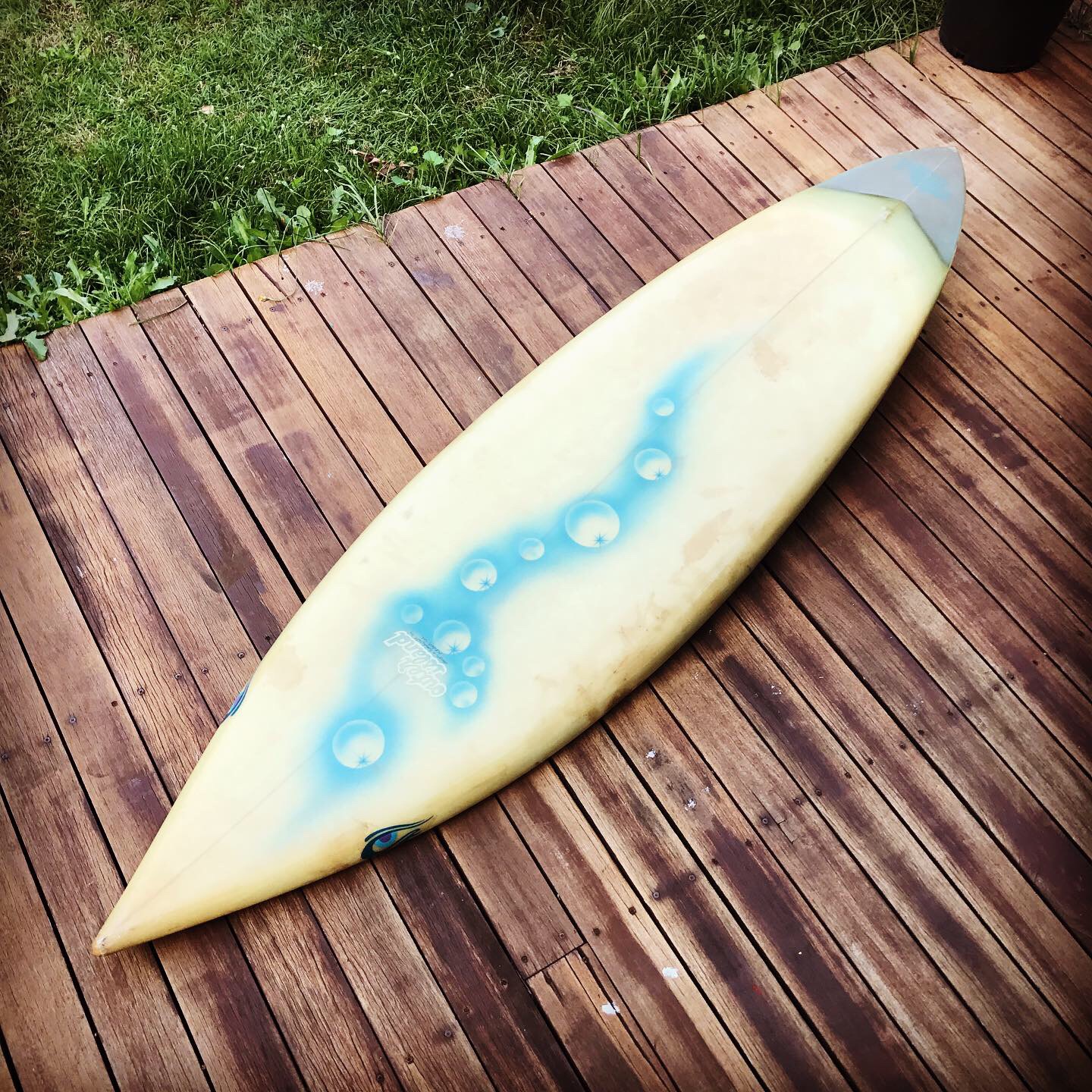 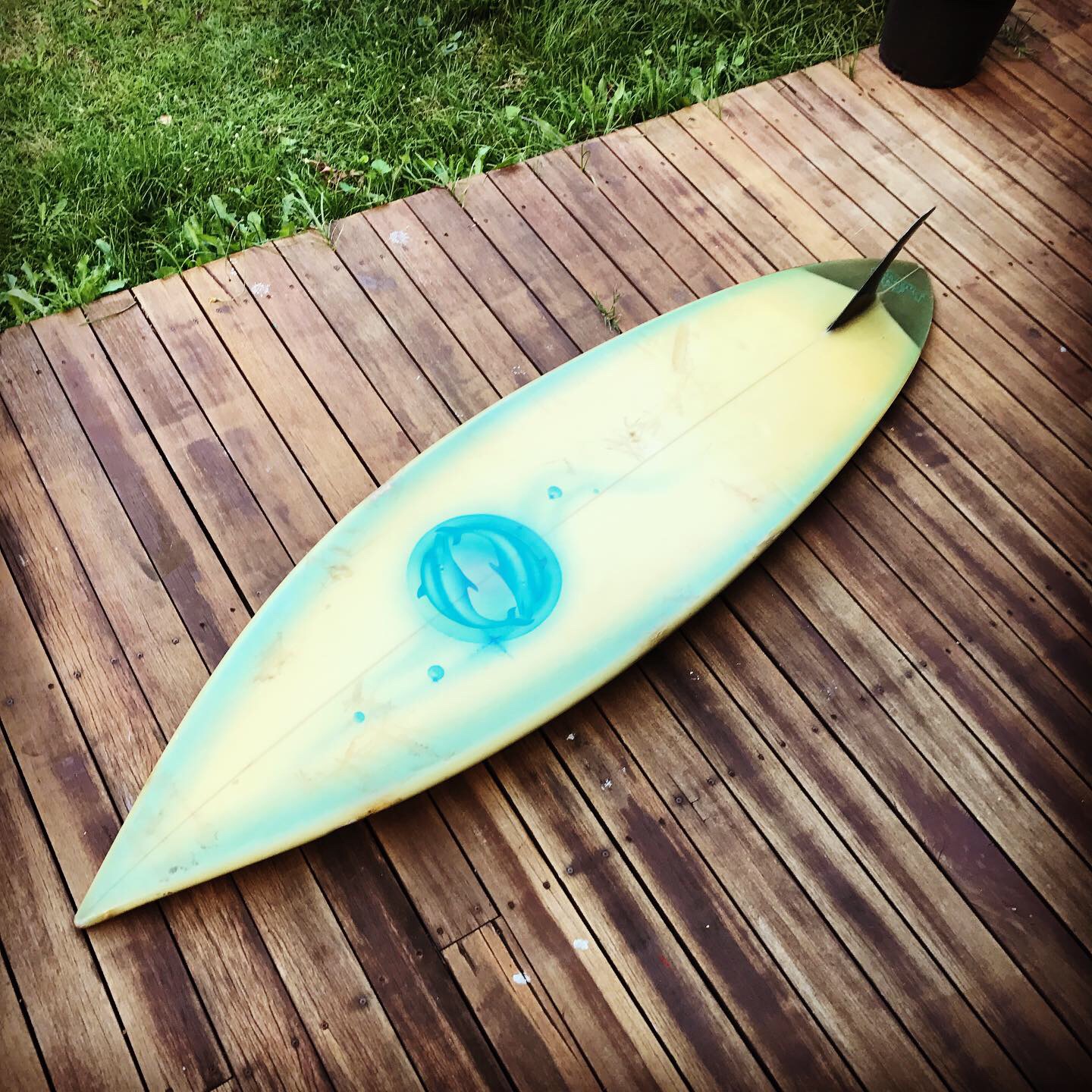 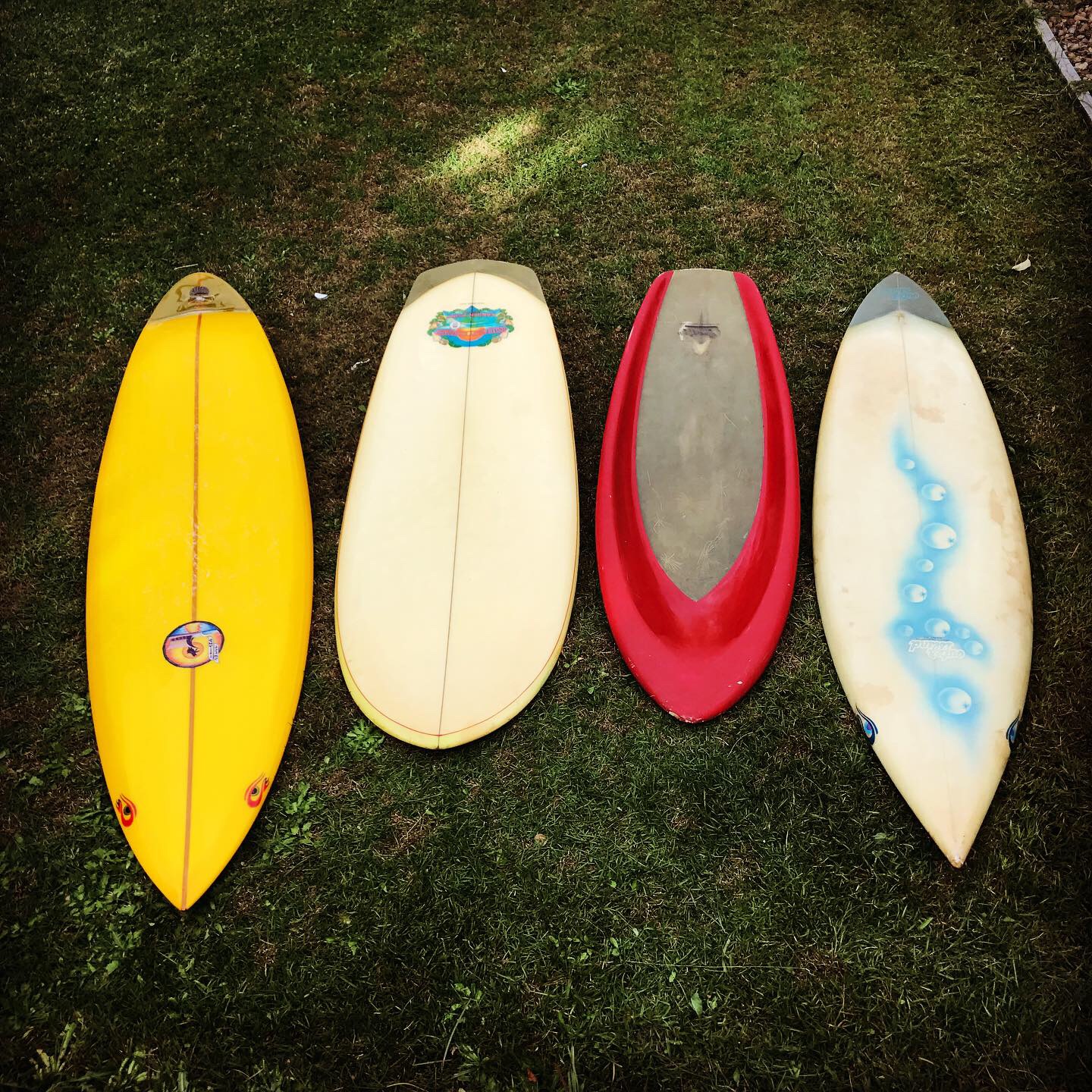 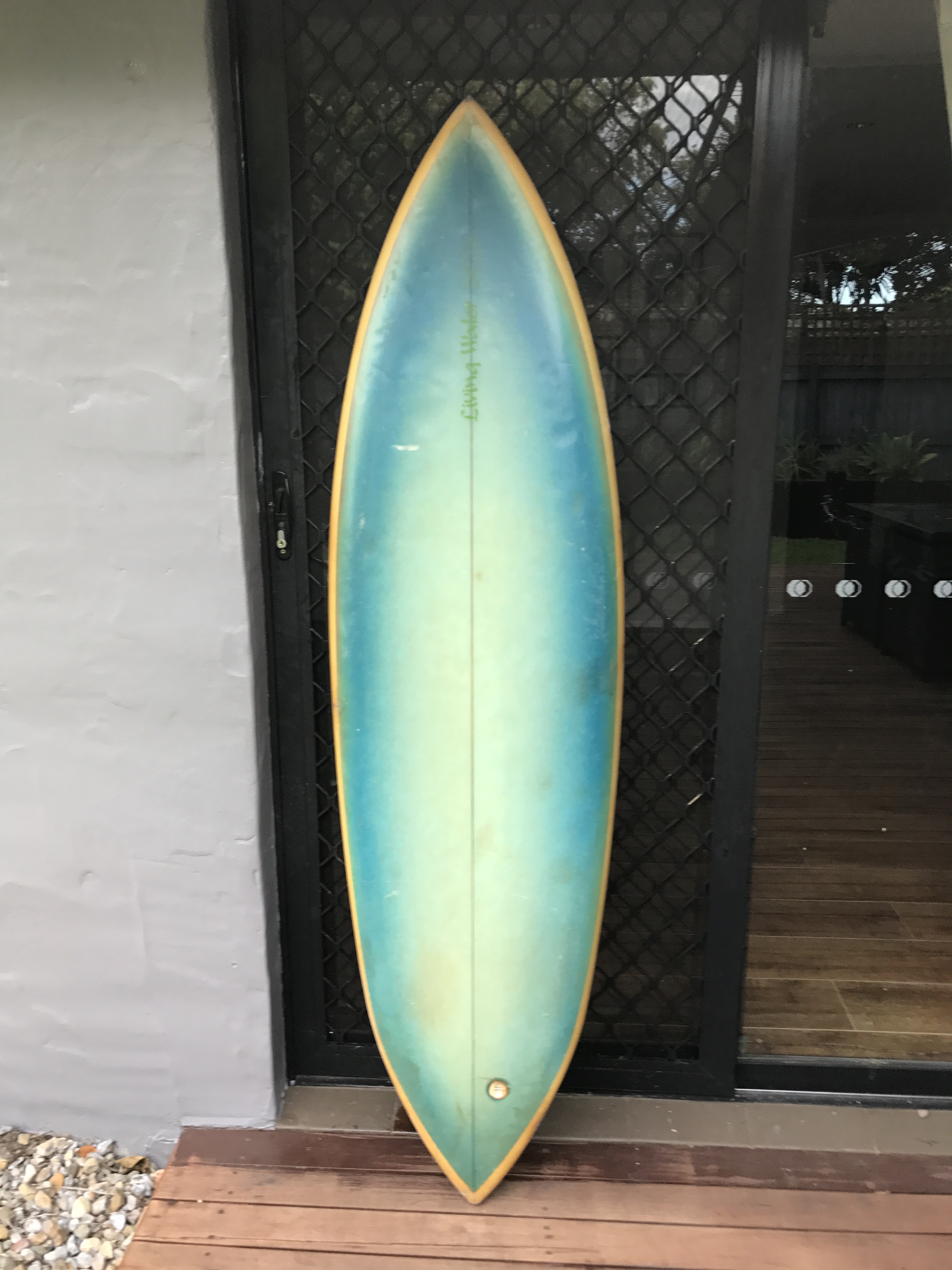 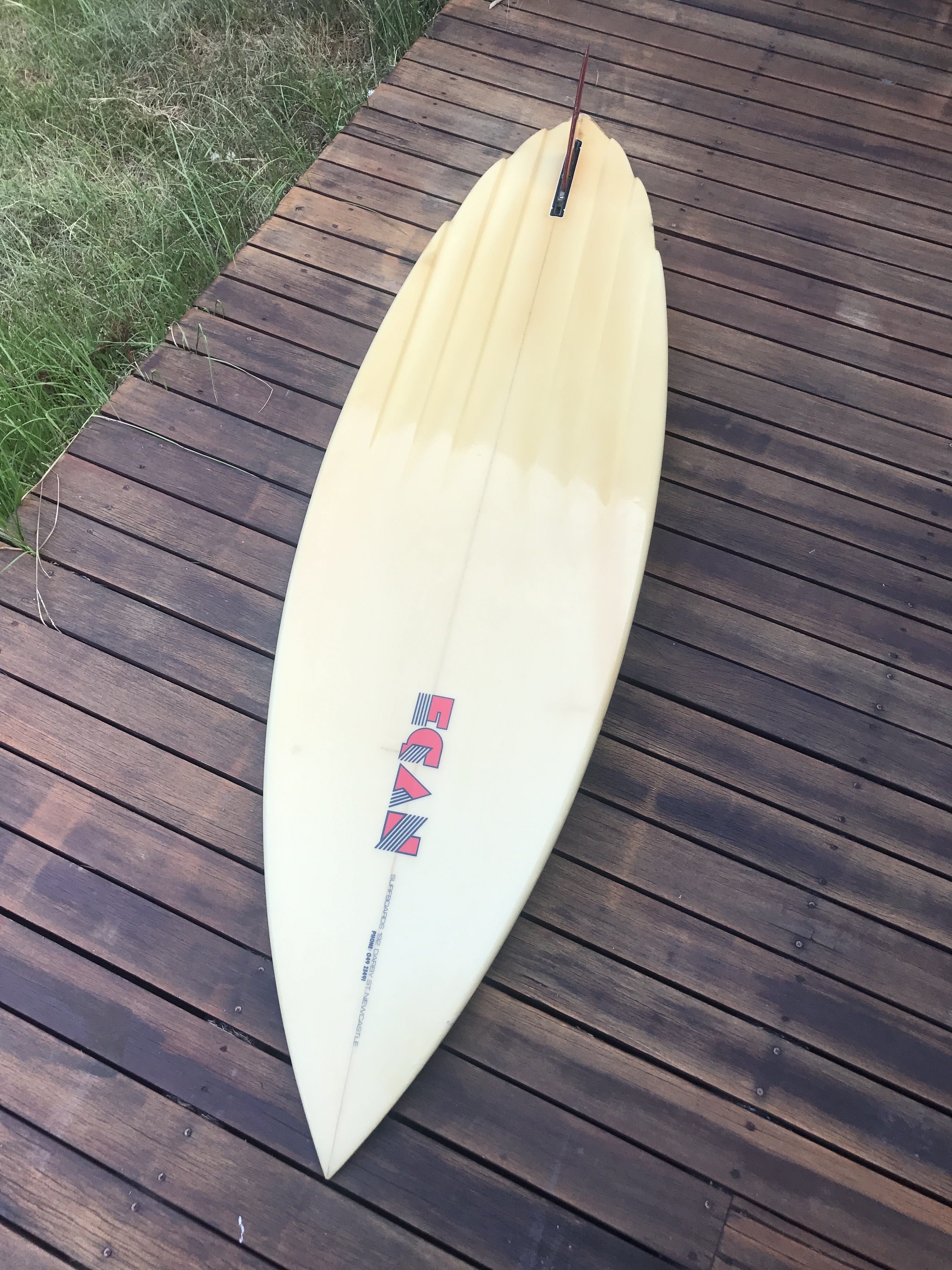 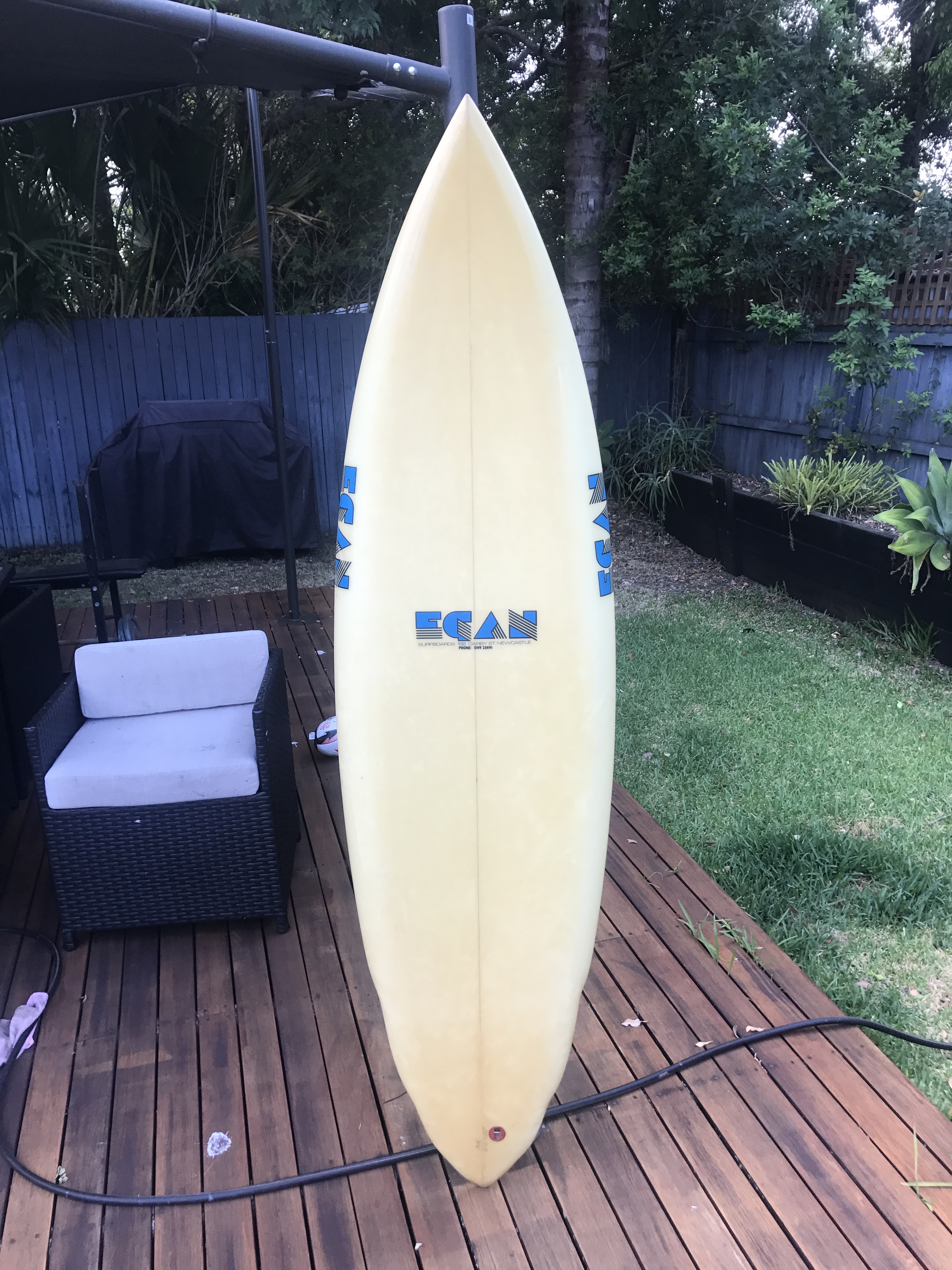 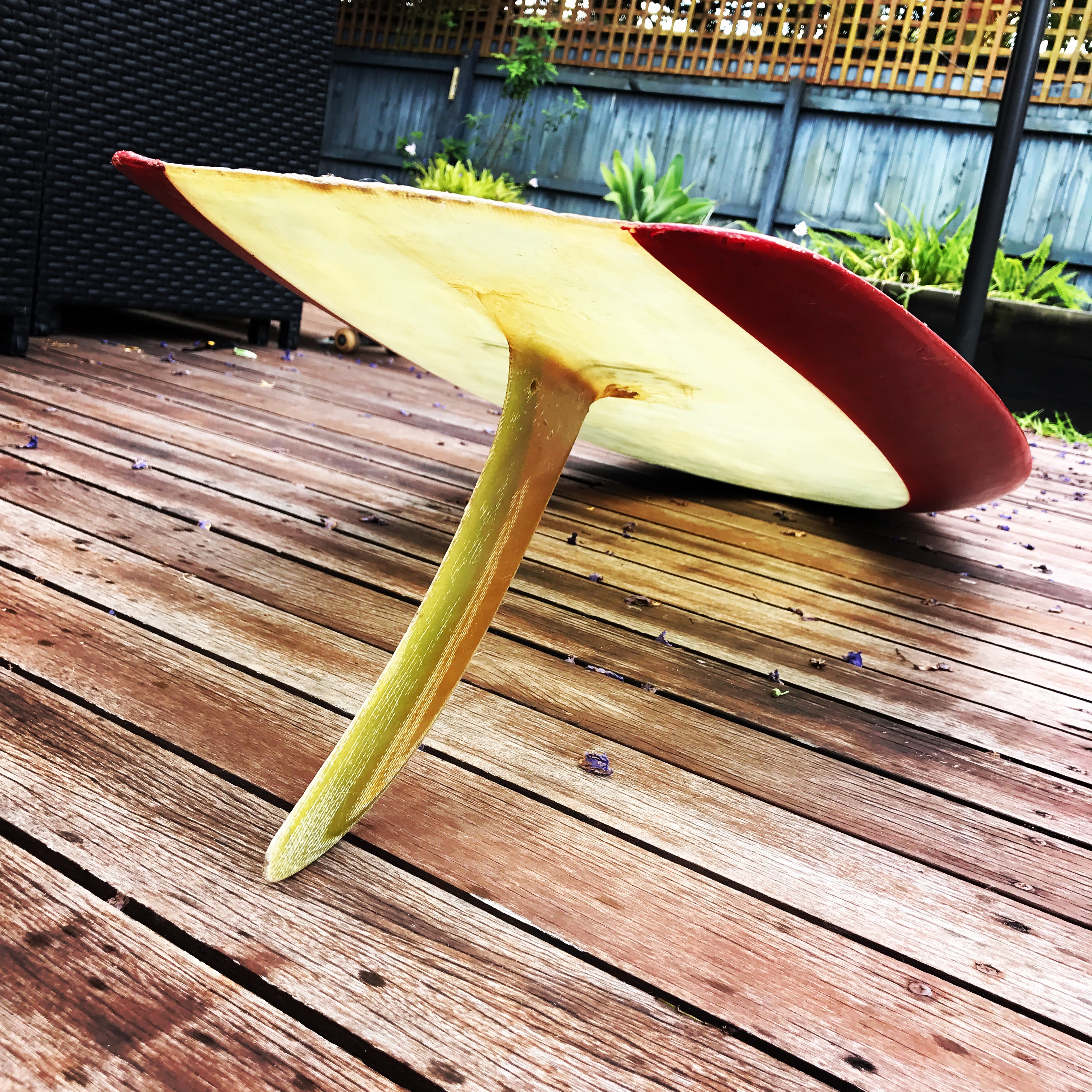 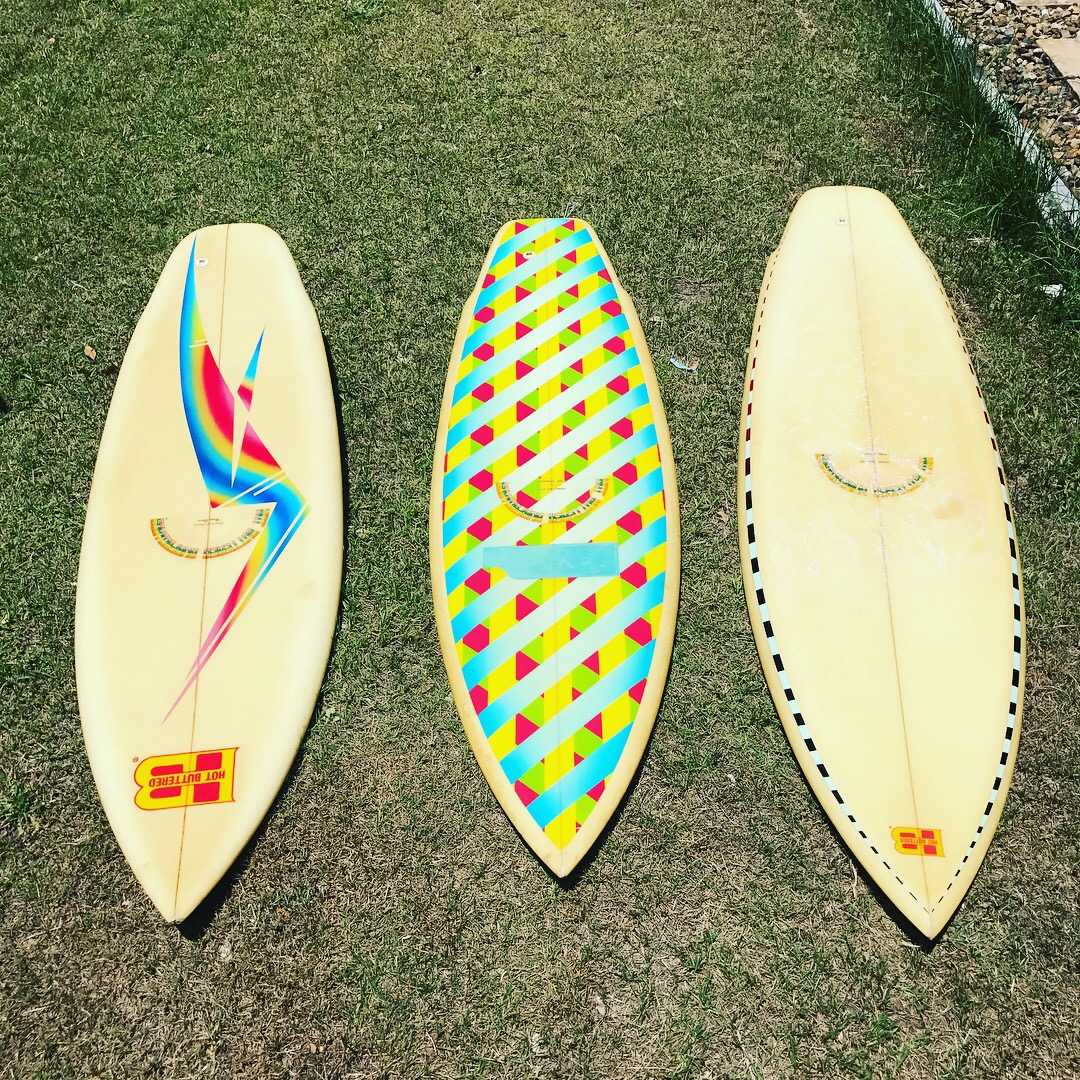 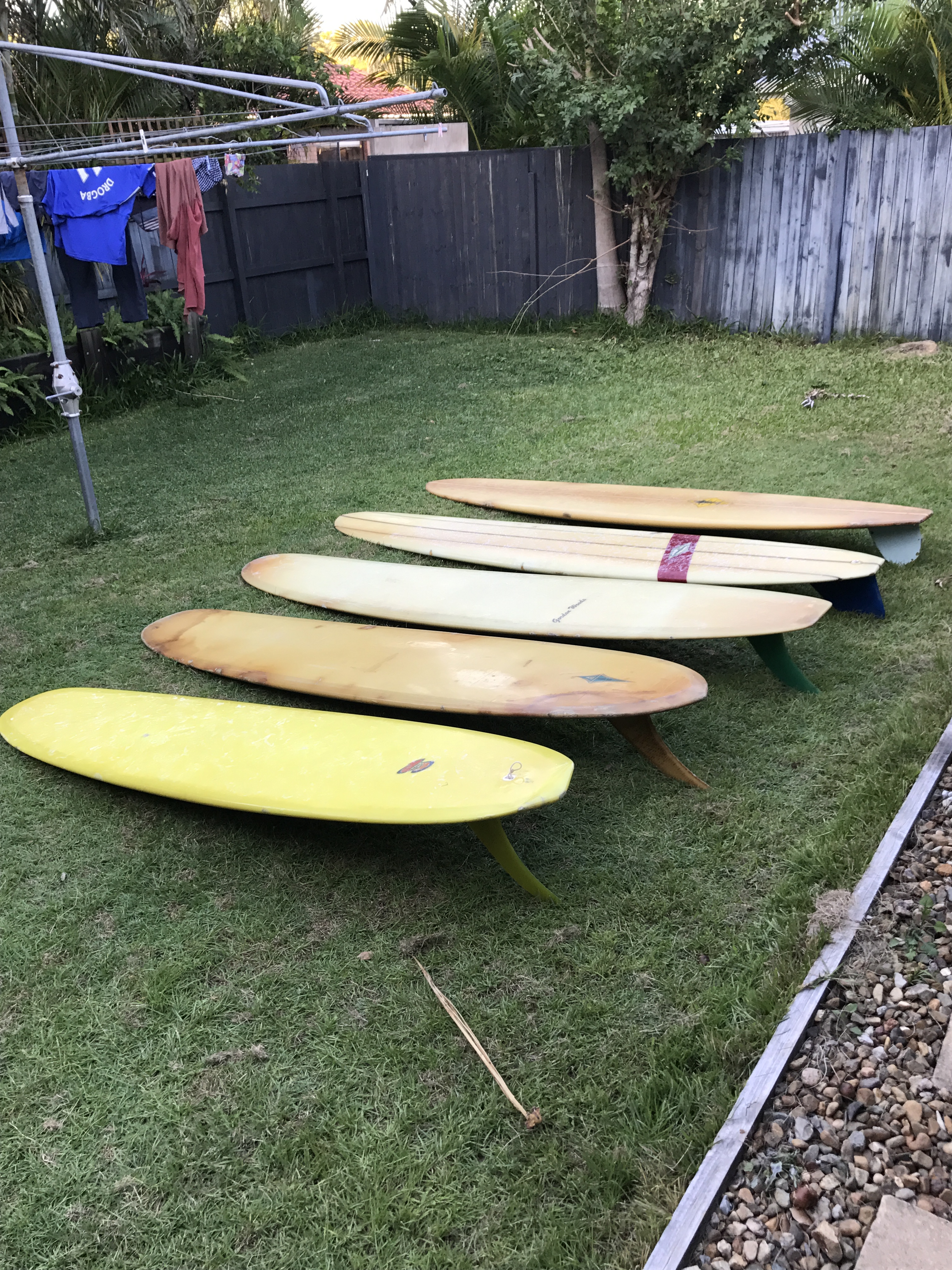 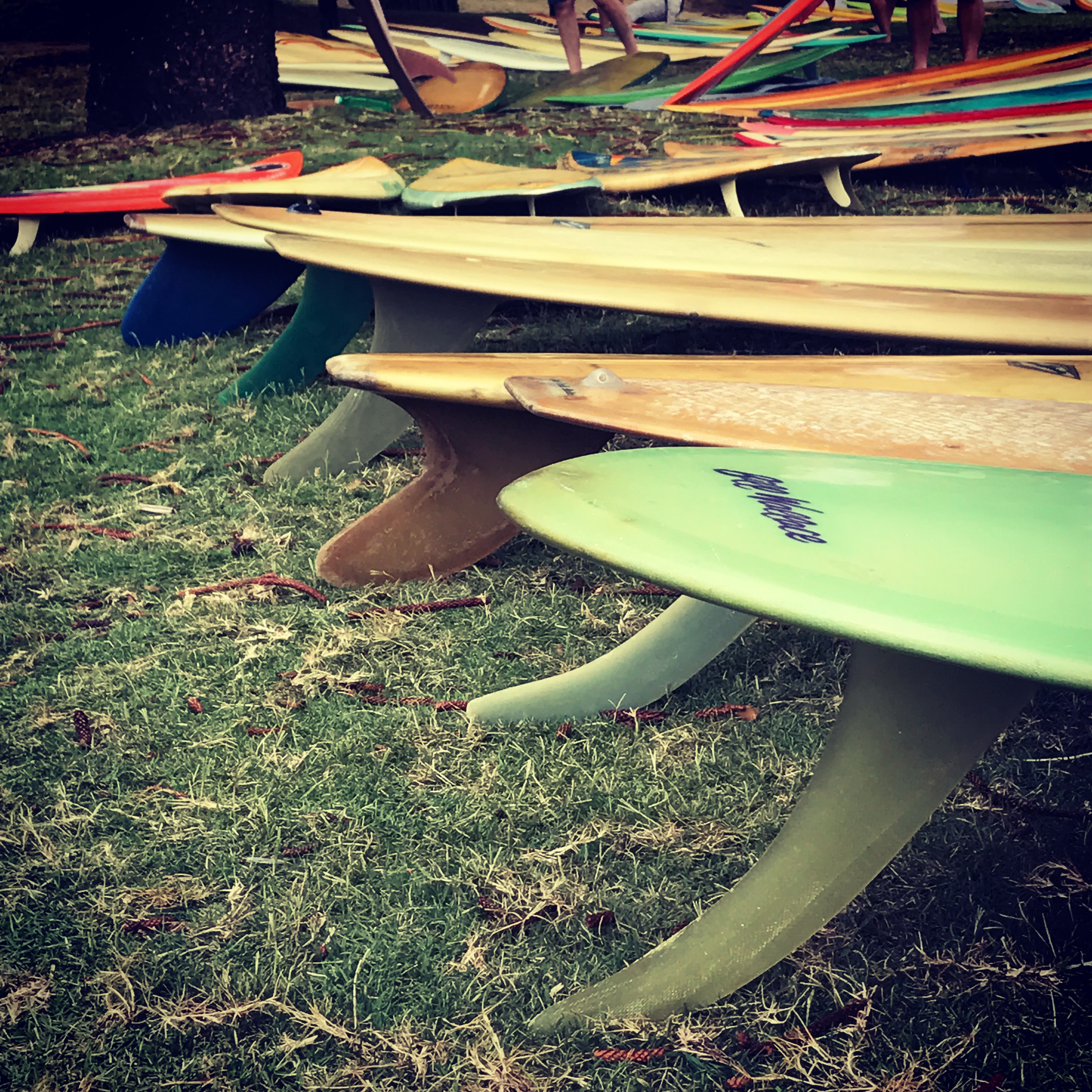 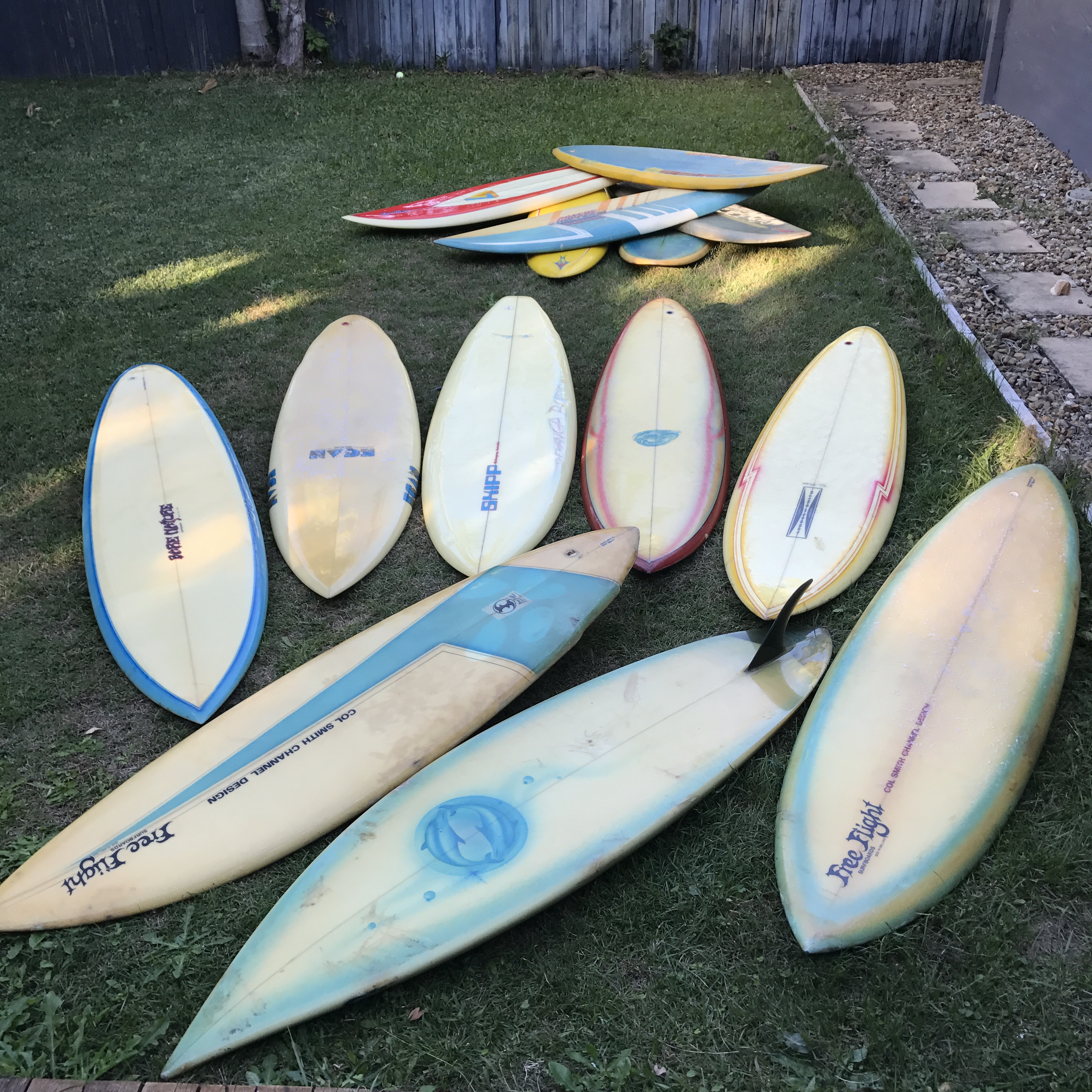 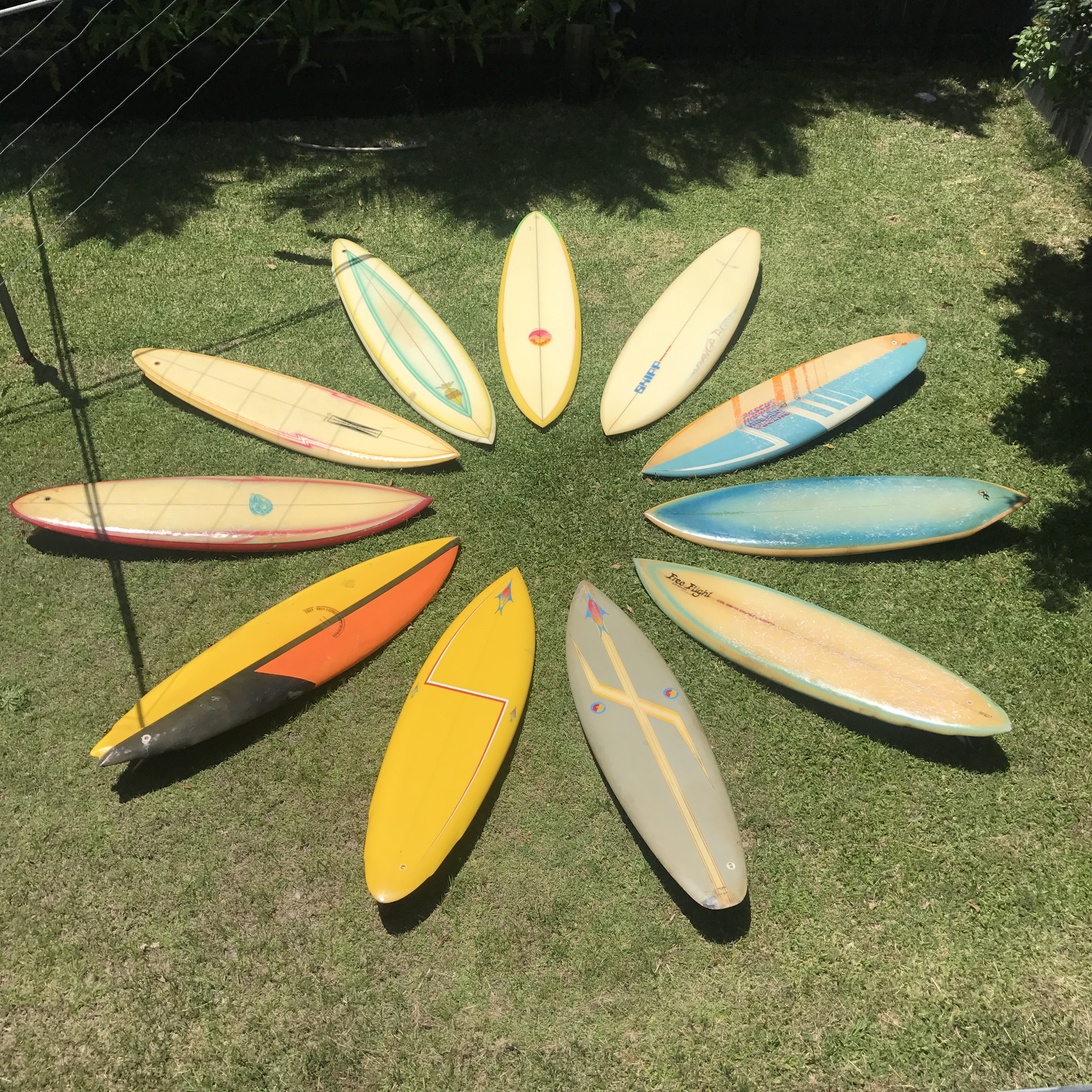 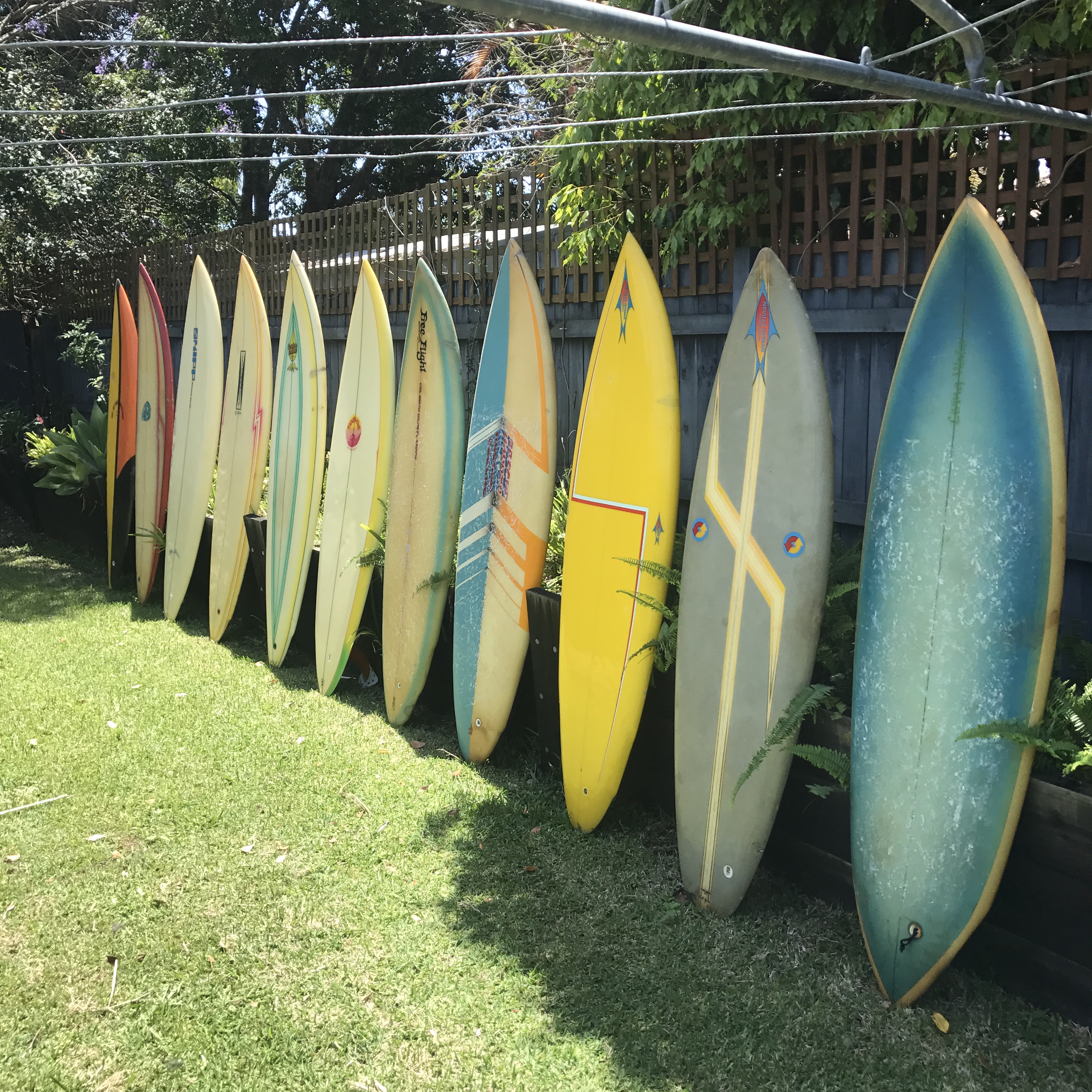 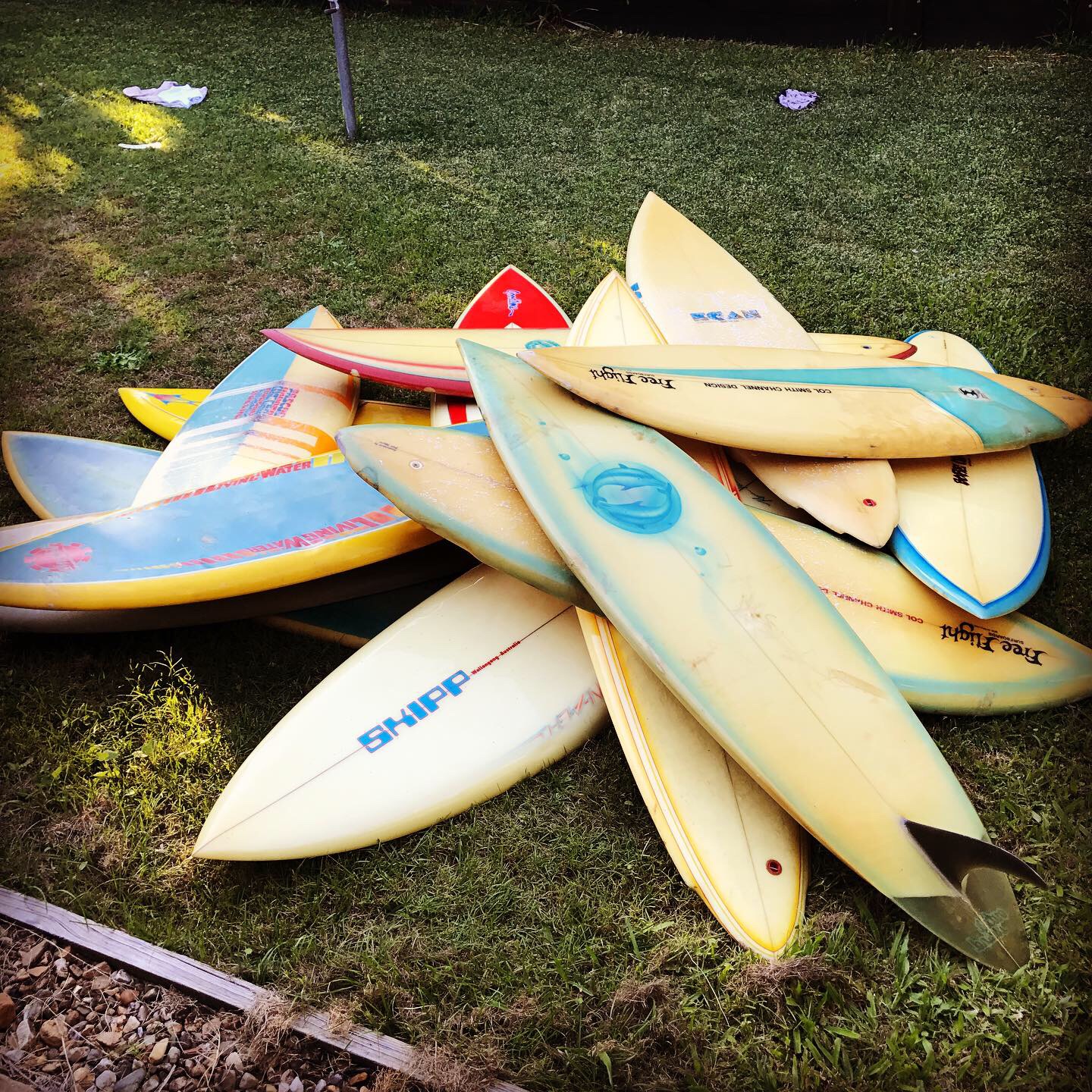 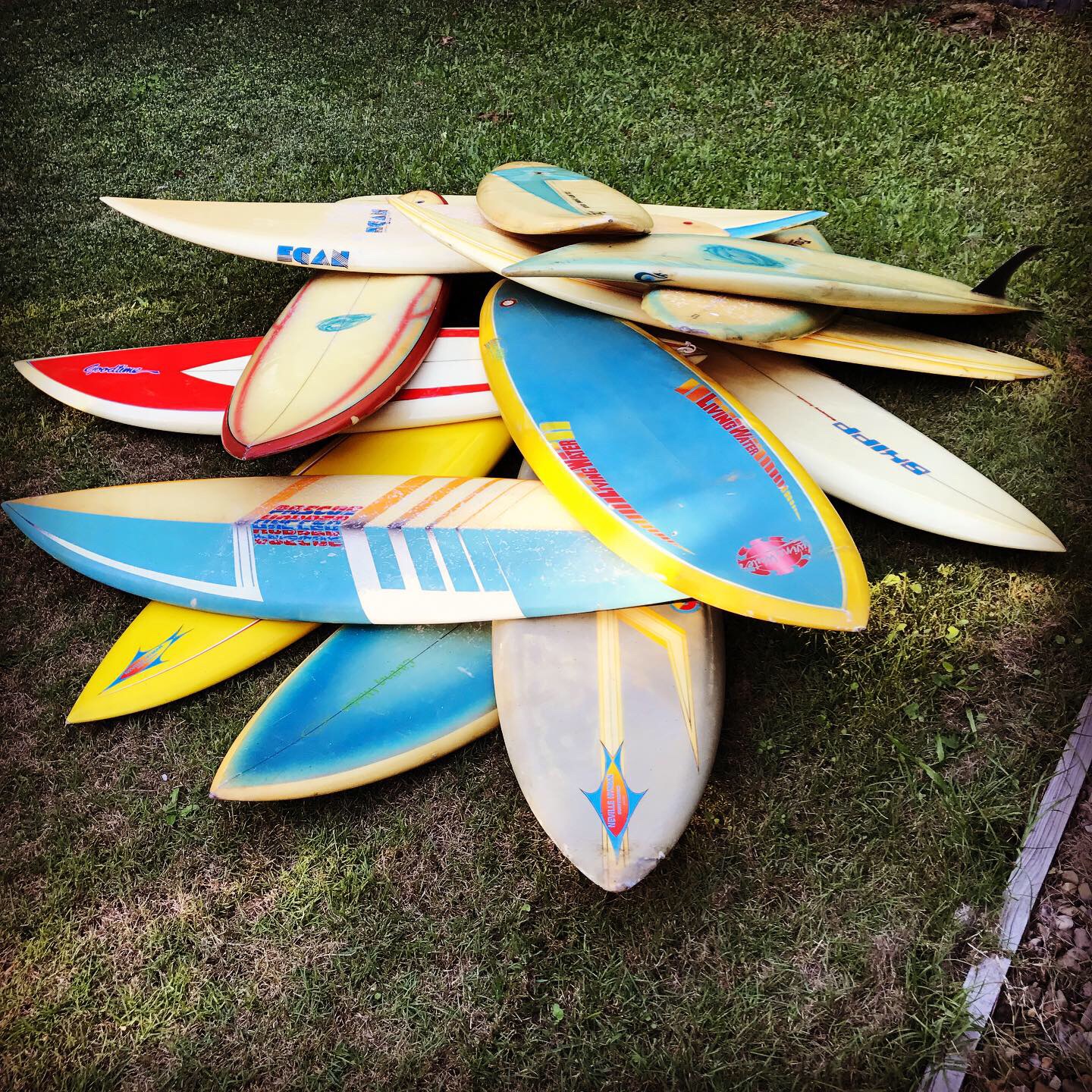 Which is now your most preferred board?
Wow! From what perspective? I really like a Gordon Woods stringerless mal with Greenough Fin from about 1968, as it surfs well and is in good condition, though it won’t turn at 4-5foot Kirra!
I have a thing for channel bottom single fins and so have a really good Sam Egan 6’5 from around 1980 and a Phil Myers Shaped 6’3 from maybe ’79.
Lately I have been frothing on a NEV shaped 6’4 twinny from around 1980. It’s not easy to get good sized twin fin riders from that period and this one surfs really well in punchy waves.
I also picked up a Mitchell Rae shaped Outer Island flextail recently, which is a unique piece of art.
I could go on… To make it onto my current collection a board has to have some features that really appeal to me.

Are you surfing your vintage boards?
90% of my boards are my size and there to be ridden. Having a few enables them to be rotated, so they don’t get too overworn and having a few “rat” riders that already have some imperfections makes me feel easy surfing them. I have actually sold on a few boards for being so mint in condition that I didn’t want to surf them.
There is usually at least one vintage board in the “back of the car quiver”.

Which one do you like to surf most?
At the moment I am surfing my Nev Twin 6’4, I really like to surf my Kevin Parkinson shaped 6’10 Skipp single as a step up board and a Nick Maslin shaped Living Water 6’3 single fin with wicked concaves at the back that is awesome in beachies. Nick Maslin is a Gold Coast shaper who turned out some amazing boards though is not that well known. I am hoping to add a couple more riders from him when I come across them.

Who is your favorite surfer from the 60’s-90’s and why?
I didn’t really follow the surfers that much during that period, but from what I’ve learned in the last few years and a few that I have met, or learned about their personalities as well as their surfing, I’d give full credit to Mark Richards (really humble and friendly), Wayne Lynch (who shaped my second ever board in 1996 which I could never ride), Bob Mc Tavish (still frothing) and Occy (he ripped!).

Who is your favorite shaper from the 60’s-90’s and why?
Phil Myers from FreeFlight surfboards, for making epic channel bottoms and experimenting with hull design (I have 2 customs on order from him now), Gold Coast Guys Al Byrne, Geoff Darby and Nick Maz (all great on channels but I wish they had made some bigger boards!), Mitchell Rae from Outer Island Surfboards for full creative artistry and also a shout out to Peter Sheeley of Sheeley surfboards who has quietly produced decades of high quality work and Jack Knight of Harvest Surfboards, for decades of beautiful shapes under a few labels (think freefluid channel bottoms) and still cranks out great customs today.

Where can we see your boards?
I’m on the Gold Coast and happy to show fellow enthusiasts a few boards and have a yarn. We also have a show and shine around Christmas every year in Coolangatta. I post a few pics on Instagram as well.

Last words:
The quality of board that are available out there to gather fix, surf and share is staggering. Even better than the boards are the fellow enthusiasts that you meet along the way.
If you are keen to start collecting, try to find a fellow collector who is willing to share some tips on how to find boards and what might suit you as a collector / surfer / enthusiast. It is possible to get a good collection / quiver together over time without a big budget, but it does take committed time.
Keep it in perspective, as much as we love them, they are just boards.
Surf more!