Robert has a pact with himself to surf every board of his collection at least once – yeah, collecting vintage surfboards means also to surf them, we totally agree with it!

Who are you? Where are you living?
My name is Robert Helphand and I live in Venice Beach California.

Which was the first board of your collection?
I got my first vintage board about ten years ago. I was driving down PCH in Surfside and spotted this awesome AIPA Sting propped up against the wall in this old surf shop. It had this beautiful spray that faded from yellow to orange to a pinkish red. The moment I got it in the water I had a newfound respect for those Hawaiian guys I looked up to as a little kid!

When and how did you start collecting?
I got the AIPA kind of as a novelty and really didn’t think about getting any other vintage boards for a few years. Then one day I thought how cool it would be to find one of the old boards I had as a kid. So I searched around and found one. Then I thought about getting a board from one of the shapers I always wanted but couldn’t afford as a kid. Then it was about getting a board that was the same model and color scheme as one of my favorite surfers from back in the day. It’s crazy how you just get sucked into it, the hunt for that awesome old board. A friend of mine likens it to a sort of drug addiction, once you get bitten by the bug you are history.

How many boards do you have?
I recently moved and scaled down my collection from over 50 boards to around 30 right now. They range from the late 70’s through to the mid 80’s. I really like the transition period from the single fin to the twin fin, but also appreciate the early thrusters and quads. There were so many design innovations during that period it is insane.

Which is now your most preferred board?
That is a tough question because I really love them all, each board is unique and special for various reasons. That said, I would have to say my current favorite is my ’81 Wave Tools twin shaped by Lance Collins. My very first new board was a Wave Tools twin my mom bought me for my twelfth birthday. I can remember it like it was yesterday, I was so stoked – the best present I’ve ever received. This board reminds me of it. 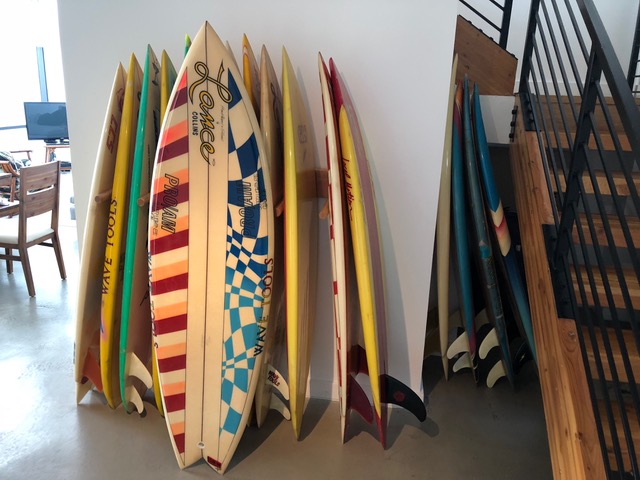 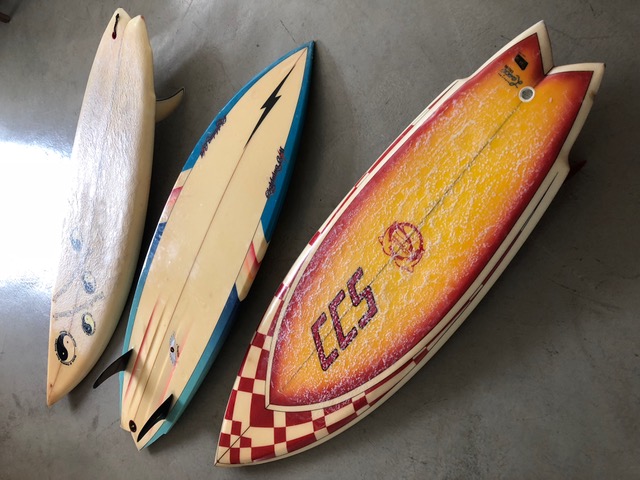 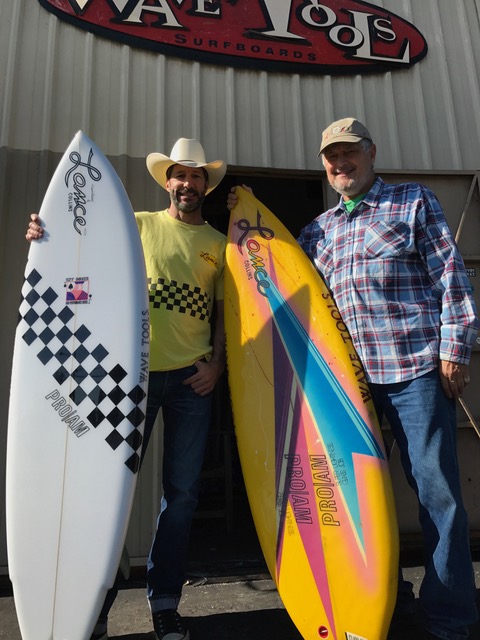 Are you surfing your vintage boards?
Absolutely, that’s half the fun! It’s such a blast getting these boards in the water, figuring out how they want to be surfed. I made a pact with myself to surf every one of them. Some are so cherry you don’t want to beat them up so you just take them out for a couple test rides. Riding these boards is a challenge and really pushes the way you approach a wave. Everything is new and fresh again. I kind of got bored surfing the same thruster all the time. But if after a few surfs I’m not into it I usually flip it. And never sell a magic board. I made that mistake once. I think the guy I sold it to was sick of hearing me talk about how much I missed it and was kind enough to sell it back to me.

Which one do you like to surf most?
I love my twin fins. It’s awesome to see that they are making a bit of a come-back! My favorite riders at the moment are a 5’10” Central Coast Surfboards (CCS) shaped by Lance Collins, a 5’10” Lightning Bolt “Rory Russell model” shaped by Tom Eberly, and the one I mentioned earlier which is a 5’11” Town & Country shaped by Dave Wallace. They are all swallow tails.

Who is your favorite surfer from the 60th-90th and why?
That’s kinda like asking me my favorite board! I learned to surf when I was 5 years old in Kauai from Margo Oberg and she will always have a special place in my heart. So sweet and kind – she passed on the ultimate aloha to me. When I was a grommet I idolized Dane Kealoha. His surfing was the perfect blend of power, grace and sheer radical abandon. I also loved Rabbit’s brash style and tube riding prowess. Cheyne Horan is another favorite. Always in the pocket, always owning it. Martin Potter. His roundhouse cutback to reentry is one of the prettiest most radical turns ever. Not to mention the air game he pioneered. Matt Archbold is right there as well and really kind of picked up where Pottz left off. But was far a favorite, in my book you can’t beat Tommy Curren. All I ever wanted to do was to watch him surf and try to surf like him. He has perfect style. If you freezeframe him at any moment on a wave he looks like he is in perfect control. A true style-master who channels equal parts power and grace in his attack. He was and will always be my hero.

Who is your favorite shaper from the 60th-90th and why?
Lance Collins. The guy is such a legend and was always so cool to me as a kid. He’d give me deals on boards and always had time to tell me about the latest “new concept brah”. Watching him in the shaping bay is a sight to behold. He is a master craftsman. I’m so stoked to see that he is back at it and churning out some killer boards again!

Where can we see your boards?
I have a few boards on loan for an installation right now at a place called Woo Studio in downtown LA. Also I helped start a thing called Surfboards & Coffee to share boards and talk story. That or there’s a good chance if you surf around SoCal you will run into me. I try to get in the water every chance I get.

Last words:
The boards of the late 1970’s and early 80’s represent an era that was truly creative and colorful. It was the era of punk rock and new wave and like the music, these shapers were all about doing something original to stand-out. As silly as it might sound it was about being radical and I love that. These boards help to keep me focused on that.