After 25 years of accumulating surf stuff, Graeme Langford decided to sell off a part of his collection including vintage surfboards, mags, posters and other memorabilia on his website, here is how he came to crystaldreams.surf:

Who are you? Where are you living?
My name is Graeme Langford (aka Langers) and after growing up in Sydney on the Northern Beaches we moved up to Valla in the Nambucca Valley in 2007, where we live on an 8 acre property that we built.

When and how did you start collecting?
It’s kind of hard to say. I had always picked up old boards from council clean ups, just for the variety and to work on technique. Surf them to death and lose them again. Then around 1992 my sister found an old trashed McGrigor shaped by Jack Knight under a house they had moved into and gave it to me. An old mate John Payne (RIP) restored it for me and that one is still with me today.A couple of others turned up soon after and also decided to stay, so I guess that would be the beginning. Then my partner and I would do a lot of garage sales where we did quite well.

Which was the first board of your collection?
As above: McGrigor shaped by Jack Knight

How many boards do you have?
I’ve not counted for quite some time but I would imagine somewhere between 140-200. Luckily I started to sell quite a few some years ago or it would just be ‘ridiculous’.
To be fair, I also have quite a few waiting for me to repair/restore which will then be offered for sale. 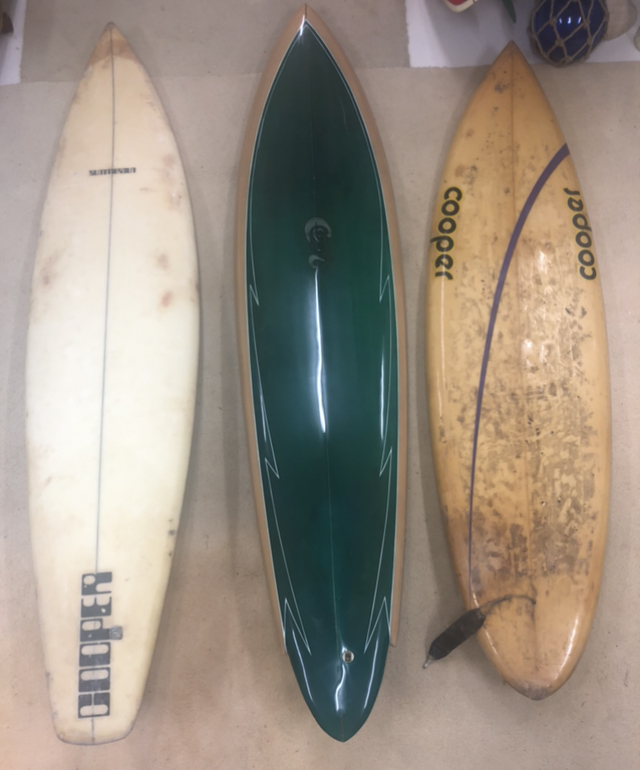 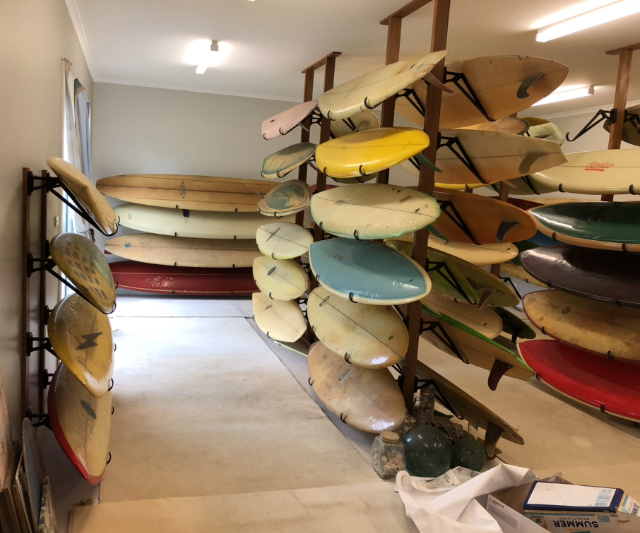 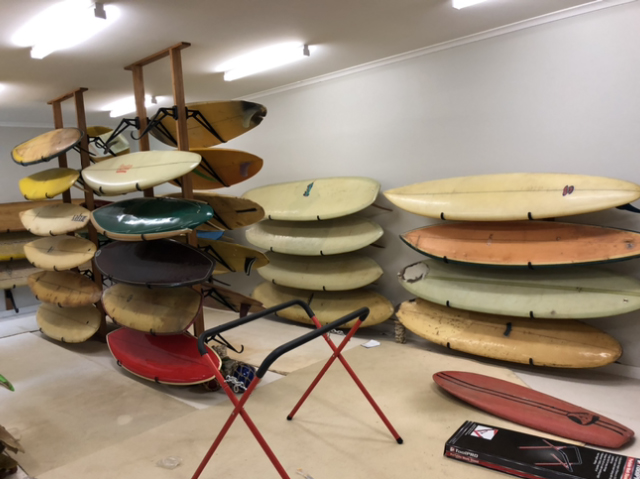 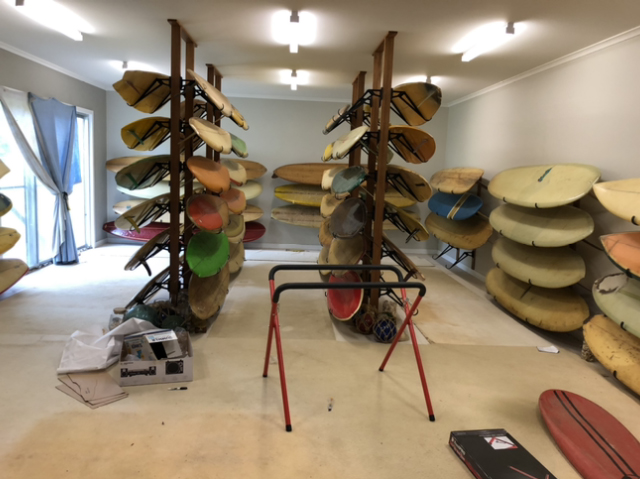 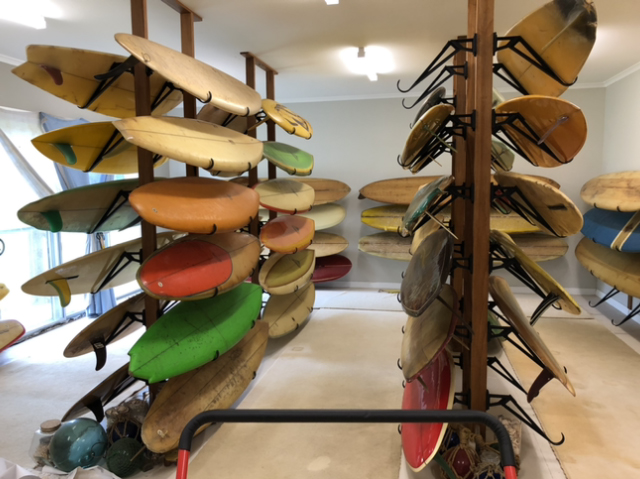 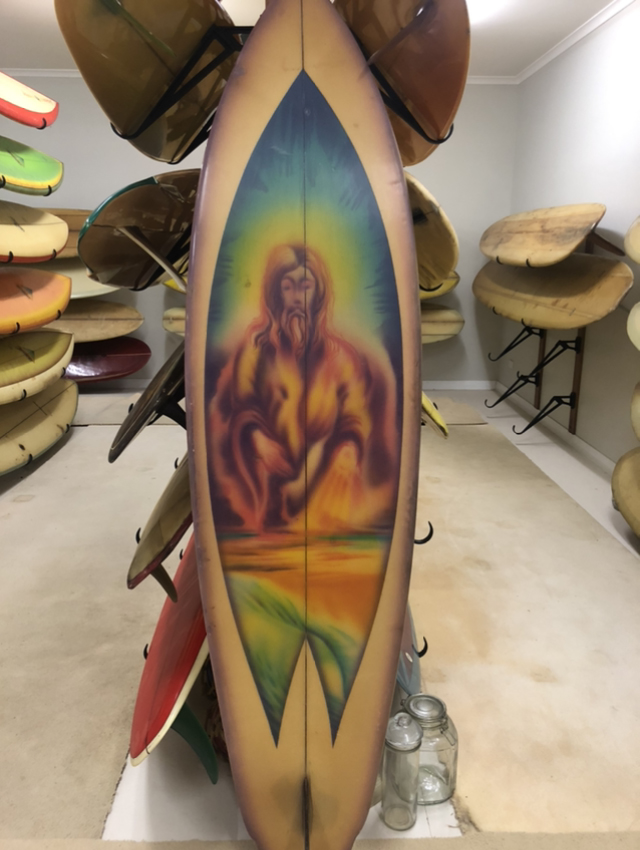 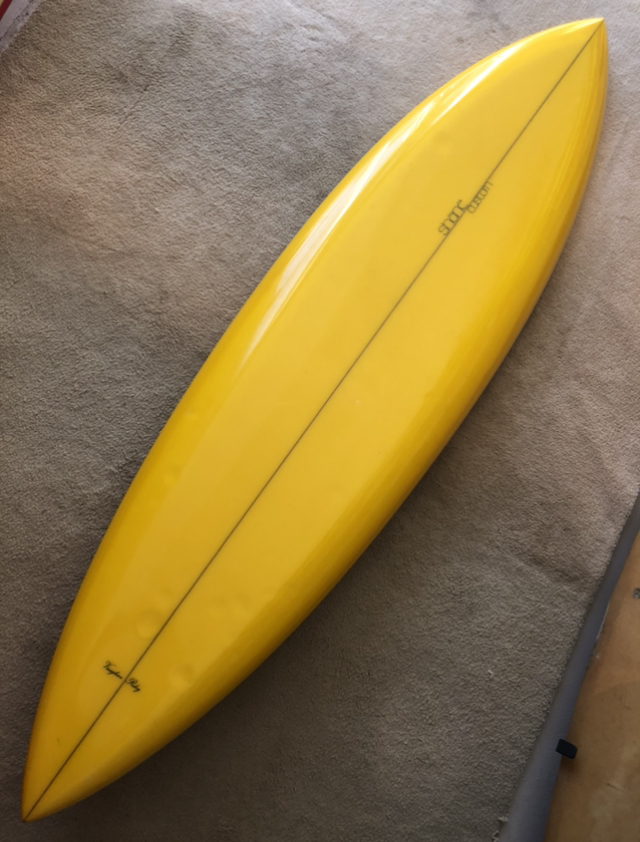 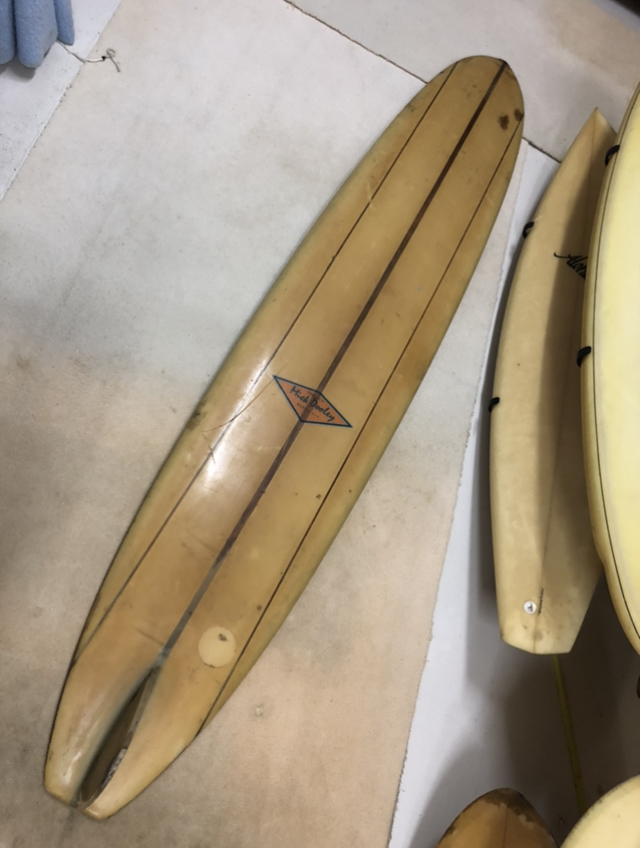 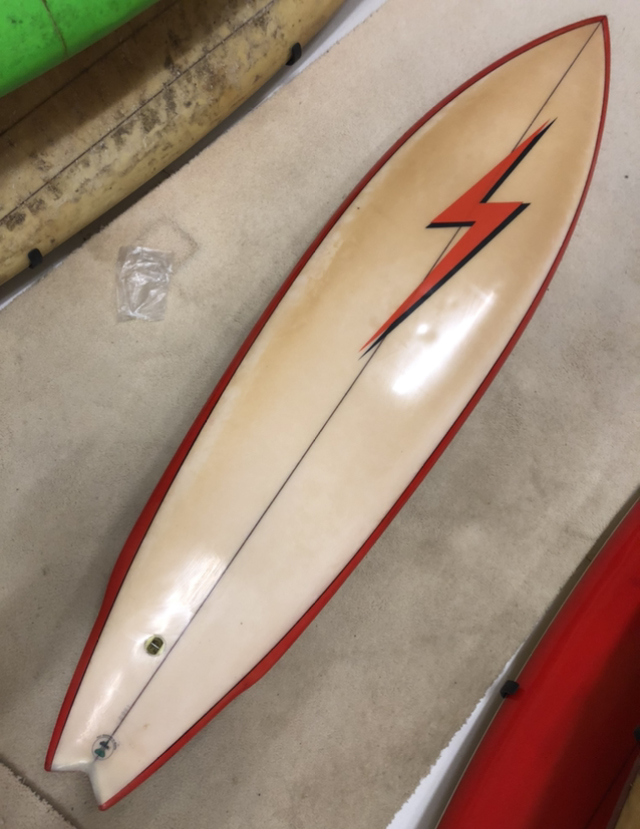 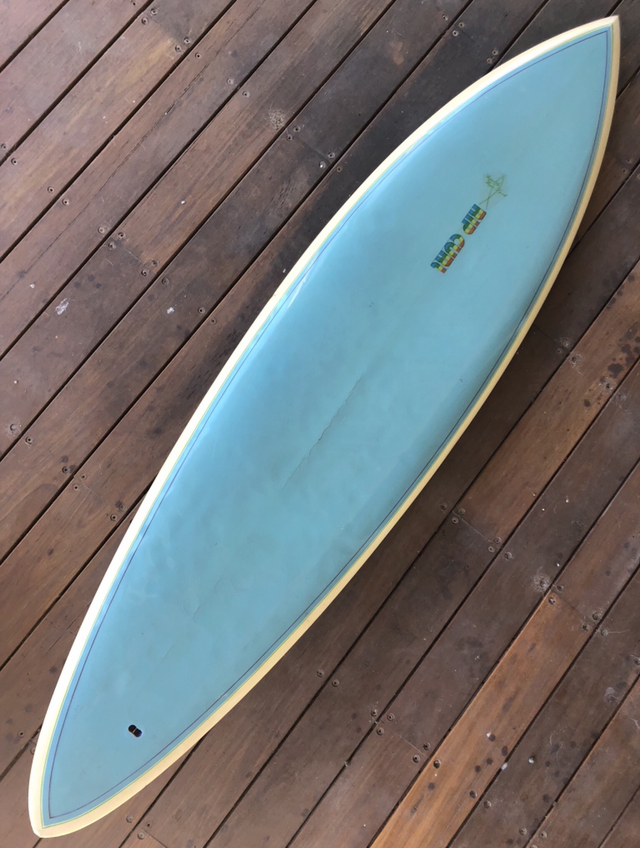 Which is now your most preferred board?
I’m not really riding any of them at the moment, but being in my late 50’s and 100kg’s I still like the McCoy big boy model a 6’10” single fin. A few years ago I started making my own boards, so at the moment I’m trying to concentrate on riding them. Admittedly they are all heavily 70’s influenced. Other than that they all seem to be my favourite for different reasons, a bit like trying to pick your favourite kid.

Are you surfing your vintage boards?
Man, I really should be reading these questions further in advance. See above.

Which one do you like to surf most?
McCoy big boy model

Who is your favorite surfer from the 60’s-90’s and why?
Kind of like asking my favourite band. It varies depending on my state of mind. I like the power surfers and style is important. So some that are up there would be: Phil Edwards, Midget Farrelly, Mick Dooley, Wayne Lynch, Peter Townend definitely, Rabbit, Shaun Thomson, Simon Anderson, Tom Curren, Gary Elkerton, Barton Lynch and I’m going to name Mick Fanning and Joel Parkinson even though they don’t quite make the year.

Who is your favorite shaper from the 60’s-90’s and why?
No outright shaper but I have beautiful Mick Dooley D fin, a nice Wayne Lynch, I’ve always owned a few Energy’s by Simon Anderson and got a lot of Alohas late 80’s early 90’s by Greg Clough. I always found him very good to deal with. He listened to what you wanted, ask why you wanted it, suggest possible improvements and then would deliver on them. So he’d be my favourite that I dealt with but I have some beautifully shaped boards downstairs by a lot of guys that don’t have the overall recognition, though are highly respected in a close knit area.

Where can we see your boards?
I have a website to display and sometimes sell boards excess surf mags and other memorabilia: Crystaldreams.surf . If people are travelling through I don’t mind them contacting me to prearrange a viewing if possible. Contact details are on the website.

Last words:
I’ve had a bit going on over the last few years and my love of the vintage boards is waning. Plus there is now sooo many people collecting and with social media it’s just all too competitive. I’m happy that I got in early where there was the thrill of the hunt. I’ve stopped looking for the main part and am selling more than I’m buying. As stated previously I’m shaping my own boards and starting to do more and more repair/restorations so that is where my focus is at the moment, having said that I’d still rather work on the old boards than the new one’s.
Thanks!
Graeme ‘Langers’ Langford