We do not hear much about Tom Parrish. He is not a self promoter but quiet is not the same thing as shy. If you can find him and want to know, Tom is happy to share what he has experienced and learned over 50 years of hand shaping custom surfboards.

Who are you? Where are you living/surfing/shaping?
Live, surf and shape mostly on Maui in Hawaii, sometimes France, Spain, Italy and Japan.

When and how did you start surfing?
At about age 12 at Kaiser’s on Oahu. It was a natural extension from water and snow skiing, which we did a lot of as a kid.

When and how did you start shaping?
In 1968 in Newport Beach, Cali. Board designs were changing rapidly and our old longboards seemed to be a reasonable choice for a blank. After the movie Evolution came out, we all wanted the new shorter Wayne Lynch type of mini longboard shapes. Since we were young and didn’t have much money, a couple of friends showed me the basics and I was ready to hack away on a couple of beautiful longboards which would be so nice to have today.

Do you remember the first board you shaped? How was it?
Yes, it was out of my 9’4″ Greek Eliminator, which was in perfect condition before I stripped it. I made a 6’11 round nose egg shape round pintail. The hardest part was trying to get enough nose rocker out of the flatter longboard. It worked pretty good, it didn’t do anything particularly great but it was easy to ride and started a fascination with making more boards. 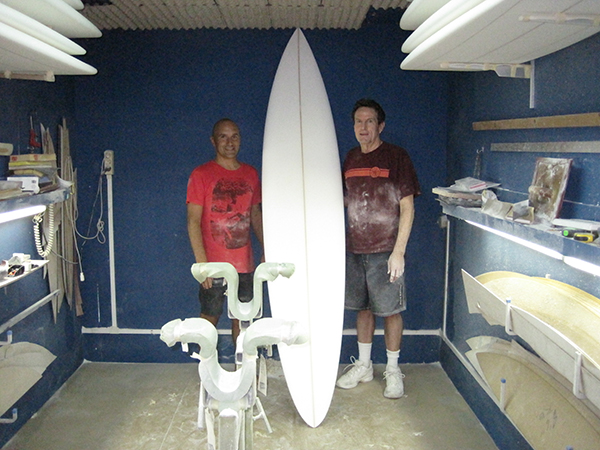 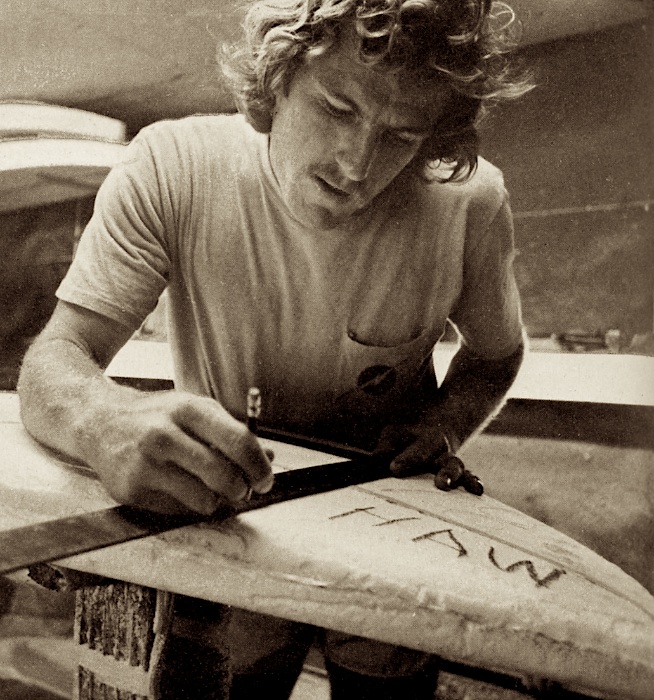 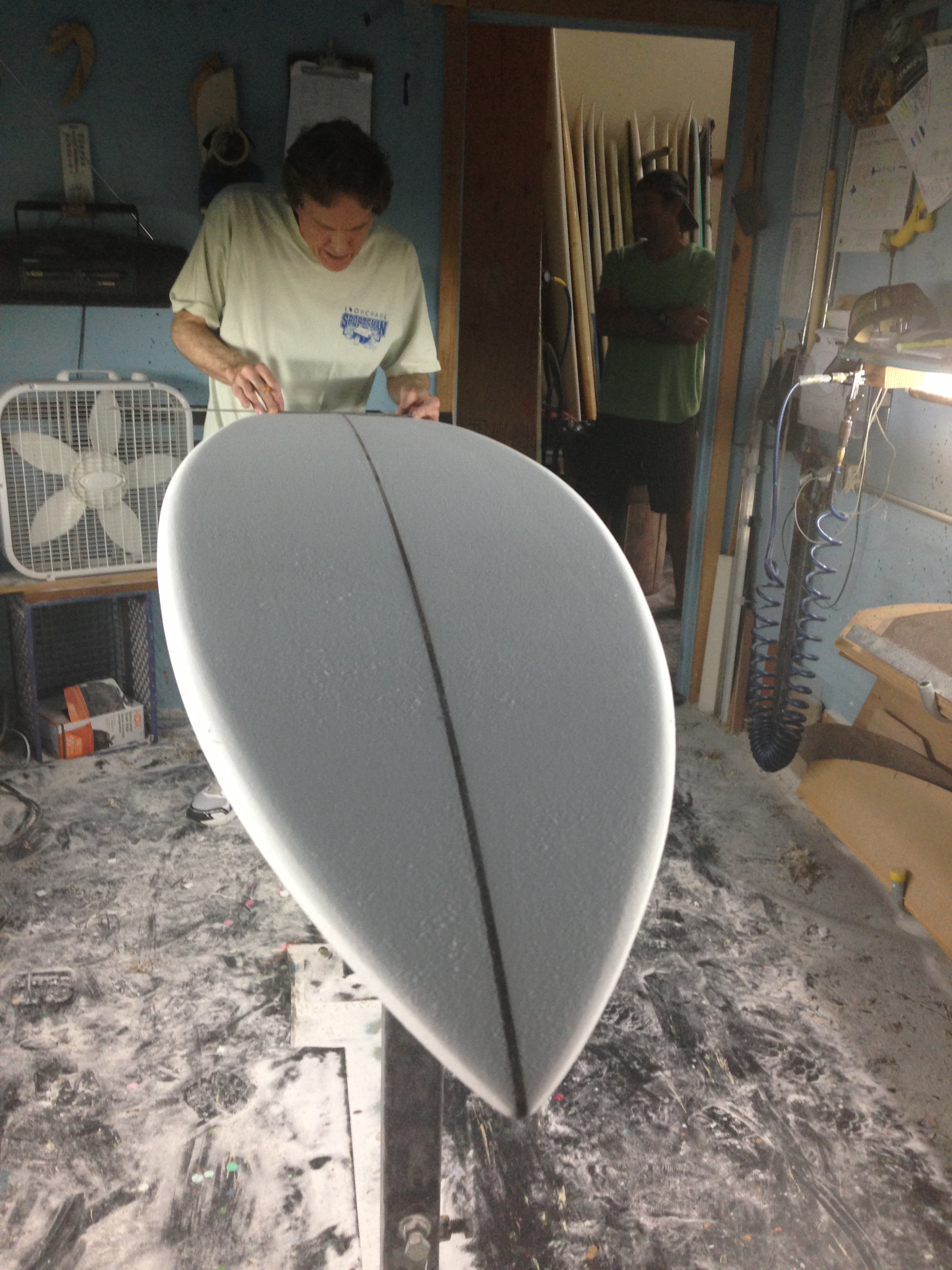 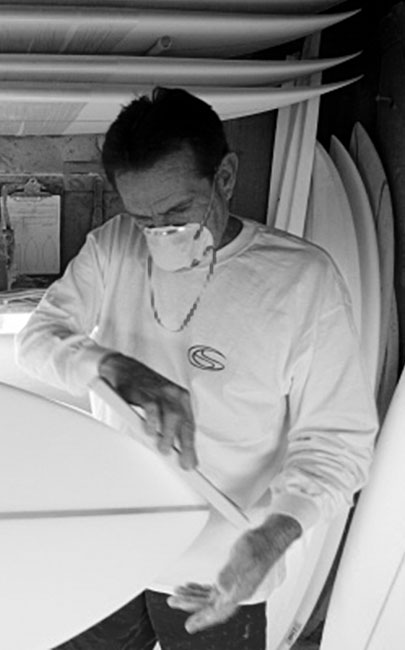 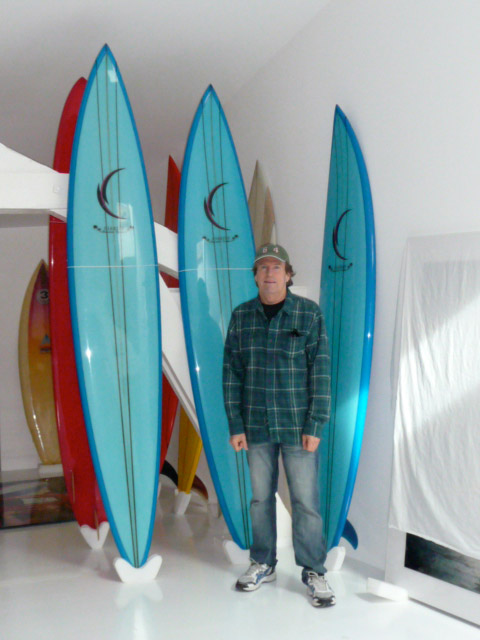 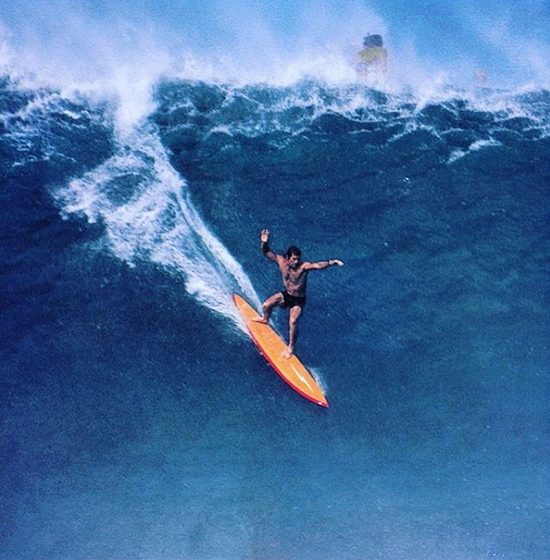 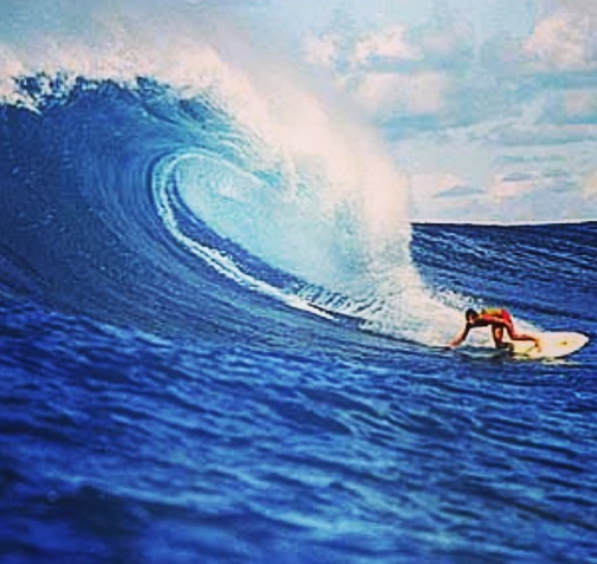 Which surfer had the biggest impact on your shaping?
Several guys have graciously and generously helped me along the way, such as Dave Johnson of Progressive Surfboards, Danny Calohan of Plastic Fantastic, Gerry Lopez, and Charlie Smith to name just a few. Jeff Hakman was instrumental in my improving as a shaper. We worked together a lot during the 70s and when you have someone so great giving you feedback as specific as Jeff does, you will either get better or lose him. He has a huge amount of experience and board design knowledge and loves to collaborate with shapers to try to come up with great boards. And I was lucky to grow up around fast water ski boats so I had a lot of exposure to hull designs and characteristics such as trim, grip and drag at a very early age.

Which is the best board you have ever shaped back in the days? Who for?
Not sure I could answer that with only one board but if I had to say one board, perhaps the red bottom, orange deck 7’11” that Jeff is riding in that big Pipeline backside drop. There was another one that was very special to me, a 6 channel bottom from a Clark Ultra Light blank that I ended up giving to my dear friend Alfonso Nebreda and which he rode so well on a perfect day at Alcala. Another good friend, Justin Schwartz, is a single fin lover and he has a 6’9″ round pintail which seems to find its way into the tube especially well. And Eddie Ogata, one of the very best surfers on Maui over the last 30 years and another true friend, was particularly happy with his latest small wave board. Hopefully there have been a few more that seem to please their owners.

Which was the most important era for you?
I suppose it should be the 70s because it was such a fun time working for Lightning Bolt and all the many many characters who I was able to work with because of that. But I have at least an equal appreciation for the 60s. I love the many board designs from this period. The incredible transition from Bob Shepard and Pat Curren to Brewer produced some of the most beautiful big wave guns that were ever made. Brewer’s radical mini guns at the end of the 60s pushed design ahead again. And the many different small wave longboard shapes from the 60s were also very interesting.

Who is your favorite surfer from the 60’s-90’s and why?
The elegance of Phil Edwards was so very special to see. Jeff Hakman, Gerry, Barry Kanaiaupuni, Charlie Smith and Ed Farwell were guys that inspired me a lot and who I was fortunate to surf with often. They are all carvers, not acrobats. Is there anything more satisfying than laying out a full tilt bottom turn 3/4 of the way down the face on a big wave? Yes a good tube ride is also very special but those G Force bottom turns are not often seen anymore. Each of those guys were masters of power surfing and also were very stylish in subtle ways. Make hard stuff look easy and graceful. It made me want to make boards that will hold in and not dig rail at any speed or in any amount of bumpy and turbulent conditions.

Who is your favorite shaper from the 60’s-90’s and why?
There are so many who inspire me. The immense amount of design advancement attributable to Brewer is unmatched in the history of surfing as far as I can tell. I have loved working with Charlie Smith over the last 40 or so years. Gerry inspires everyone and is unbelievably good with the Skill planer, I feel so lucky to have had the chance to work with him. Kike Panera does beautiful work and we have done a couple of tag team projects that were so fun and different. Maurice Cole’s forward V was and still is a fantastic design. There are and have been so many great shapers, it’s not really fair to just mention only a few. And perhaps next time we should talk about glassers and how important they are to the job we do.

Last words:
You might be sorry you asked, it’s hard to figure out where to start. To keep this from becoming too long, maybe just a couple of illustrations of how things have changed might also remind us of how we now accept such a diminished credibility in so much of the industry. Does anyone else find it a little surprising that nobody seems to have noticed that shapers are not shapers anymore? They are computer button pushers who mass clone boards out a hundred at a time. And the pubic seems to accept any spin and spiel without any consciousness of the fact that a model is just another way of saying not custom. Custom was when you had an idea for a new board and shared that idea with your shaper and then together developed a design and then watched your board get shaped while interacting with the shaper to get it done the way you like to surf. Custom is not putting out a clone made by a computer and a router bit that happen to have some numbers the customer might like and giving it some silly name. To say they are shapers who do custom work is disingenuous and misleading, if not outright fraud. Most of the so called best makers give out copies of their computer files so their clone boards can be cut anywhere in the world. Then someone who is not the so called shaper finishes the basically already done board. Then a pre made scribe is used to forge the so called shaper’s signature onto the board so the public is tricked into thinking the so called shaper actually shaped their board when often they have not even touched it. When and why did we become so corrupt? When did surfers throw away their power to reject misrepresentation and unoriginality?

With the proliferation of surf contests came the insatiable greed so prevalent today. Whether it is excluding the public from using their own beaches or the selfishness and lack of individuality they breed, surf contests promote the notion that crowds are something desirable. Instead of preserving the sacredness of uncrowded surf, especially in light of the overcrowded conditions all over the world, surf contests do just the opposite. A few people get exclusive use of the public’s resources while a private, for profit, entity benefits. Gone are the days of pristine, uncrowded beaches, gone are the days when the term “Public Interest” was something valued over private profits. Gone is our heritage of not being willing to sell out. Gone is the work ethic that produced those beautiful handmade guns from the 60s.

The reality of how greed replaced soul, style and individuality as the primary value in surfing has been a gradual dilution. The willingness to hide or shade the truth happens because almost everyone has their hand in it in one form or another and therefore are not about to call themselves out for selling out. Honestly looking at and admitting what we have become is one way to remember the core values that made surfing something different from other sports or artistic pursuits. Is there even such thing as the truth anymore? Most everyone seems to develop their own truths to rationalize their behavior. And then create some kind of revisionist history to serve as justifications. The really sad part is that the younger generations have no other reference, it’s all normal to those coming up now. And another part of the reality is realizing all the kids who won’t have the opportunity to have this great, fun job as an authentic custom board maker. Real shapers are no longer needed since one computer button pusher or Asian pop out maker can produce all the clone boards the world needs.