Because his boards were to floaty while he was contest surfing, he converted himself in one of the most successful californian shaper.

Who are you? Where are you living/surfing/shaping?
Dennis Jarvis, Hermosa Beach California the “TRUE” surf city of the world! I don’t travel as much as I used to, but I like anywhere there isn’t a lot of people, so I guess you can say I don’t surf as much as I used to, I LOVE Malibu and how performance oriented it is. I moved my “shape shack” about a year ago back to Hermosa Beach, it is only a few blocks from my home and I can walk, bike or scooter there in minutes. It has really opened my mind on how much I LOVE to shape surfboards.

When and how did you start surfing?
I never fit in in grade school. All the “cool” guys played organized sports like baseball, football and soccer. I didn’t like being told what to do by anyone that was my age. So one day I borrowed a raft at Hermosa Pier and told myself I could be a surfer if I wanted to. So, I caught a wave and stood up, rode that sucker to the beach and never looked back. I saved my money and bought a Jacobs “Panacea” and beat the crap out of it all summer long. My parents did not like me surfing and never bought me anything after the first wetsuit my mom bought me. My father was pretty abusive and the ocean was a place to cry and laugh and meet God and enjoy my life.

When and how did you start shaping?
In 1978 Randy Rarick pursueded myself, Chris Barela, Mike Benivedez and Allen Sarlo to go to South Africa for the events they held for the ISPA. I know he was just trying to get a cheaper air fare for himself for the Gunston 500 (probably FREE!) and the boards my shaper made for me, seemed way too floaty. I started in the board building industry as an air brusher; I was 17 and had decent hand eye coordination.  So I actually went to SAFARI surfboards and traded my twice ridden USA made surfboard for materials to shape, airbrush and glass my first surfboard! I think it went well, I made it out of a few heats but knew at that point I wanted to make the boards I rode. You wanted to be able to adjust the design to fit MY needs.

Do you remember the first board you shaped? How was it?
See the answer above. Actually it came out really good I used it as a reference as I learned the basics on shaping. I wish I never sold it. Meant a LOT to me. (lots of VEE in the tail though totally against todays designs!) 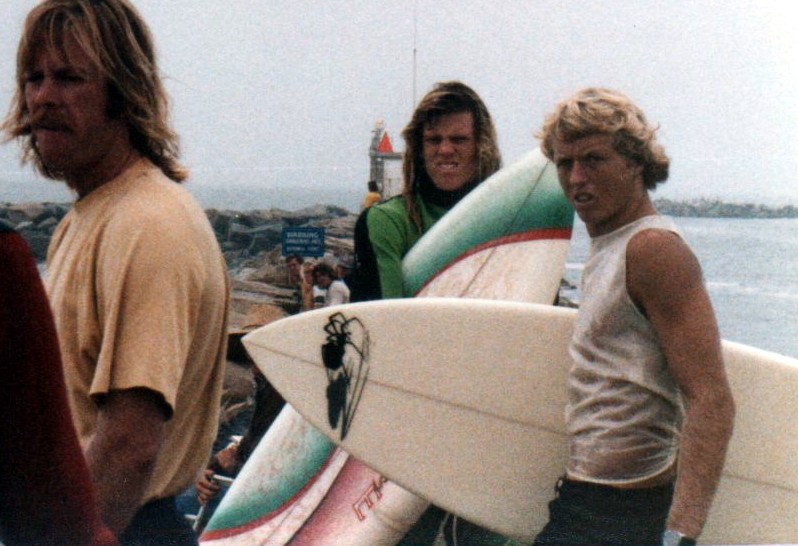 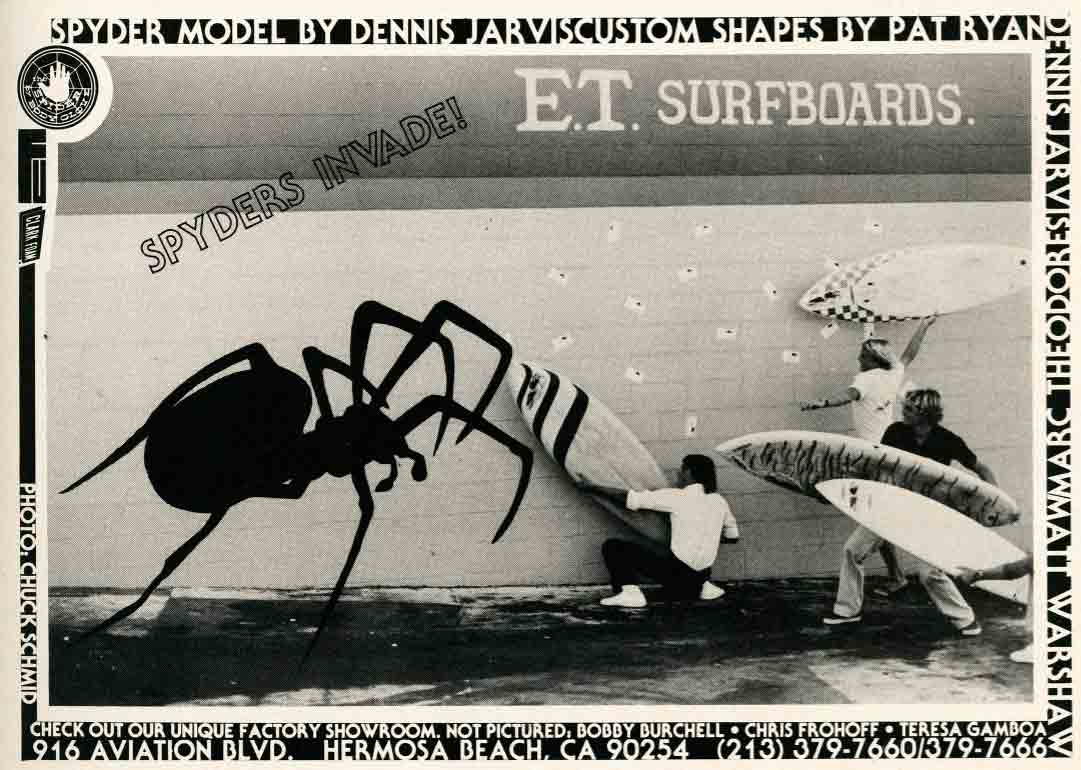 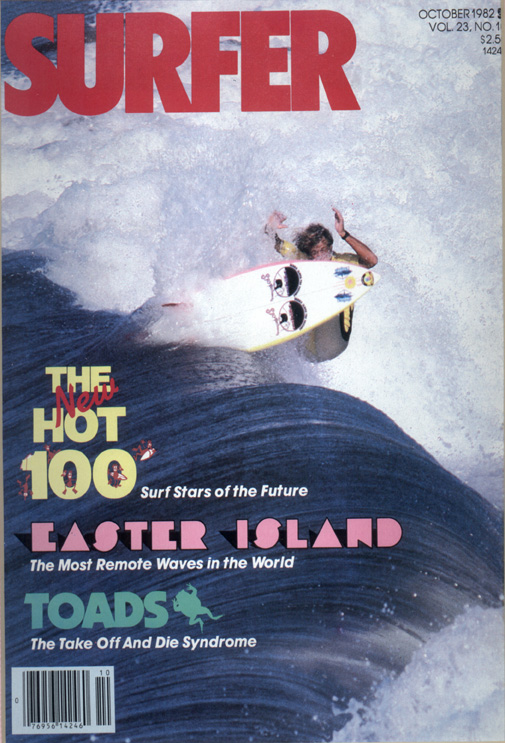 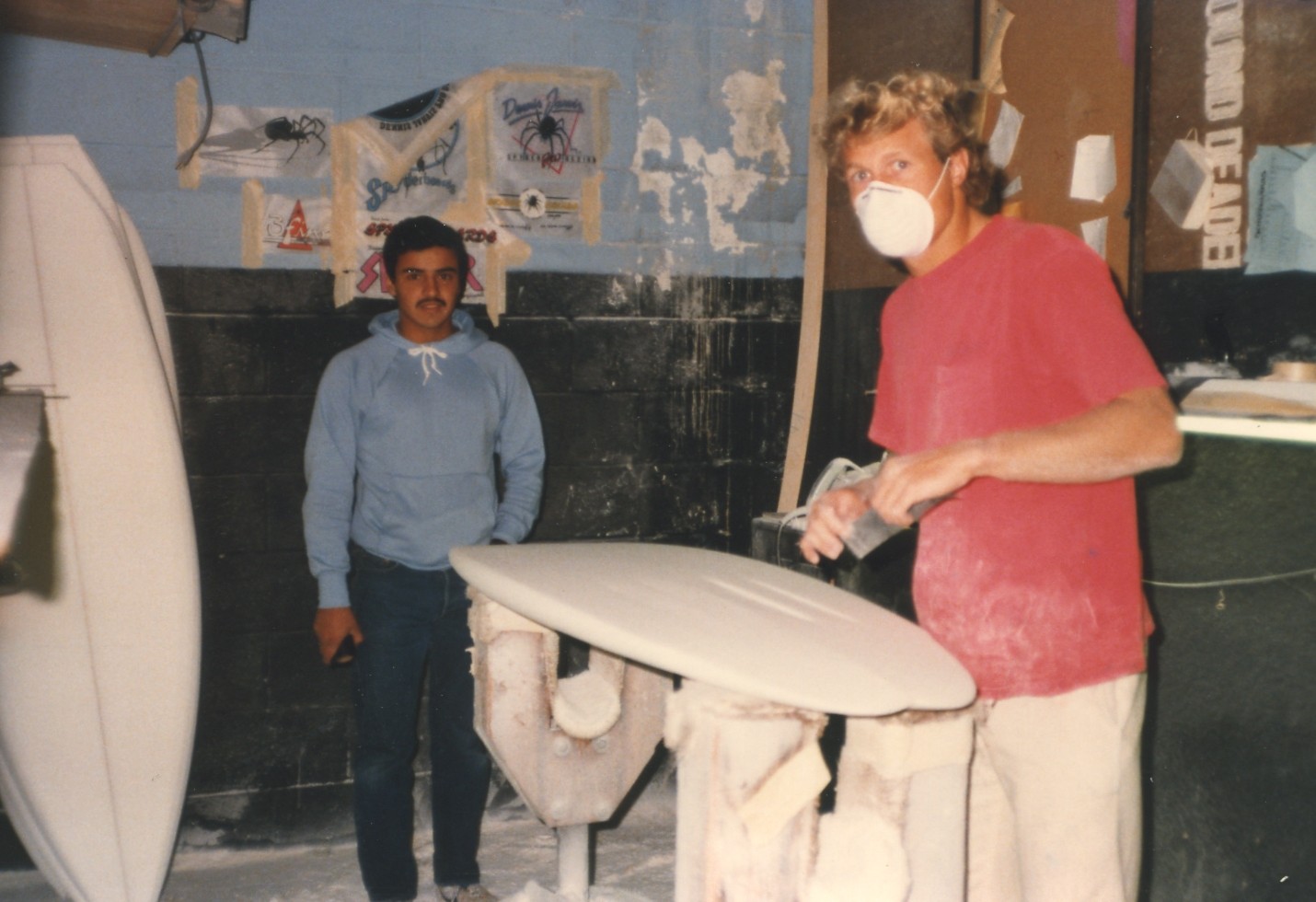 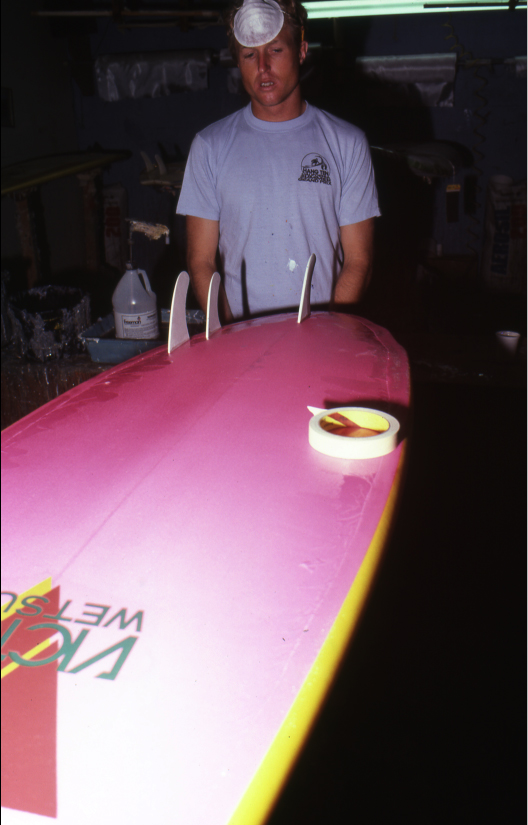 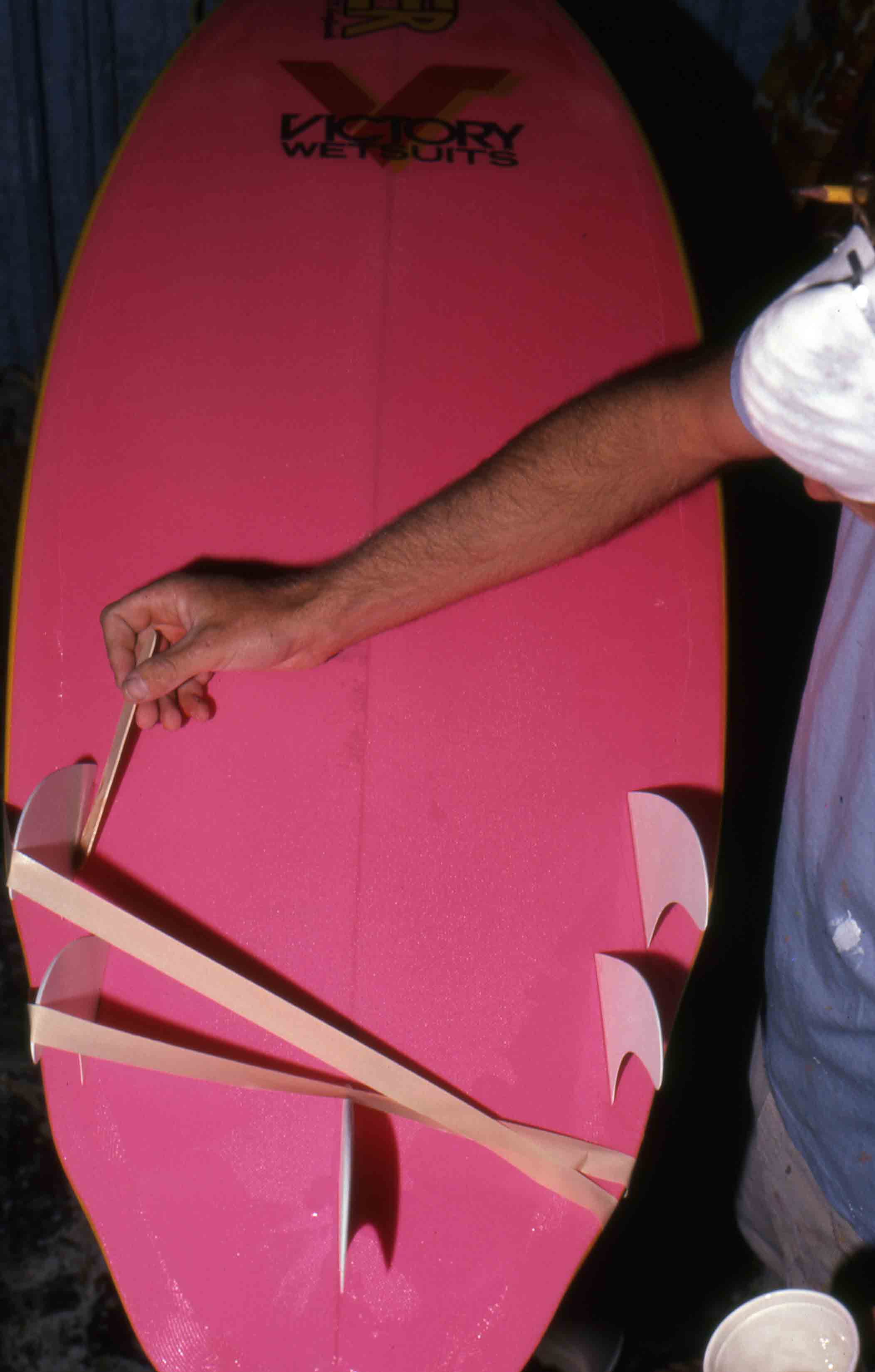 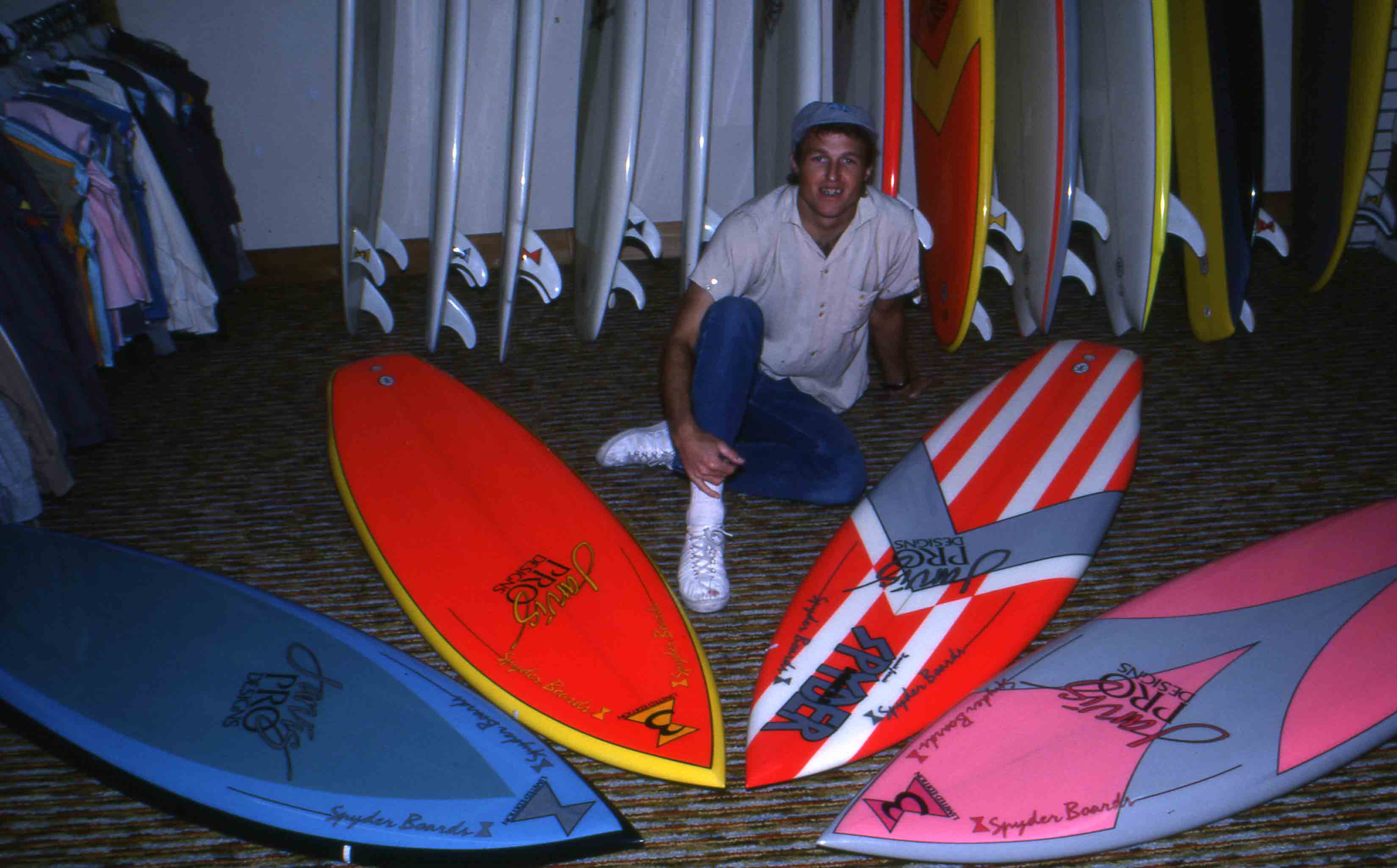 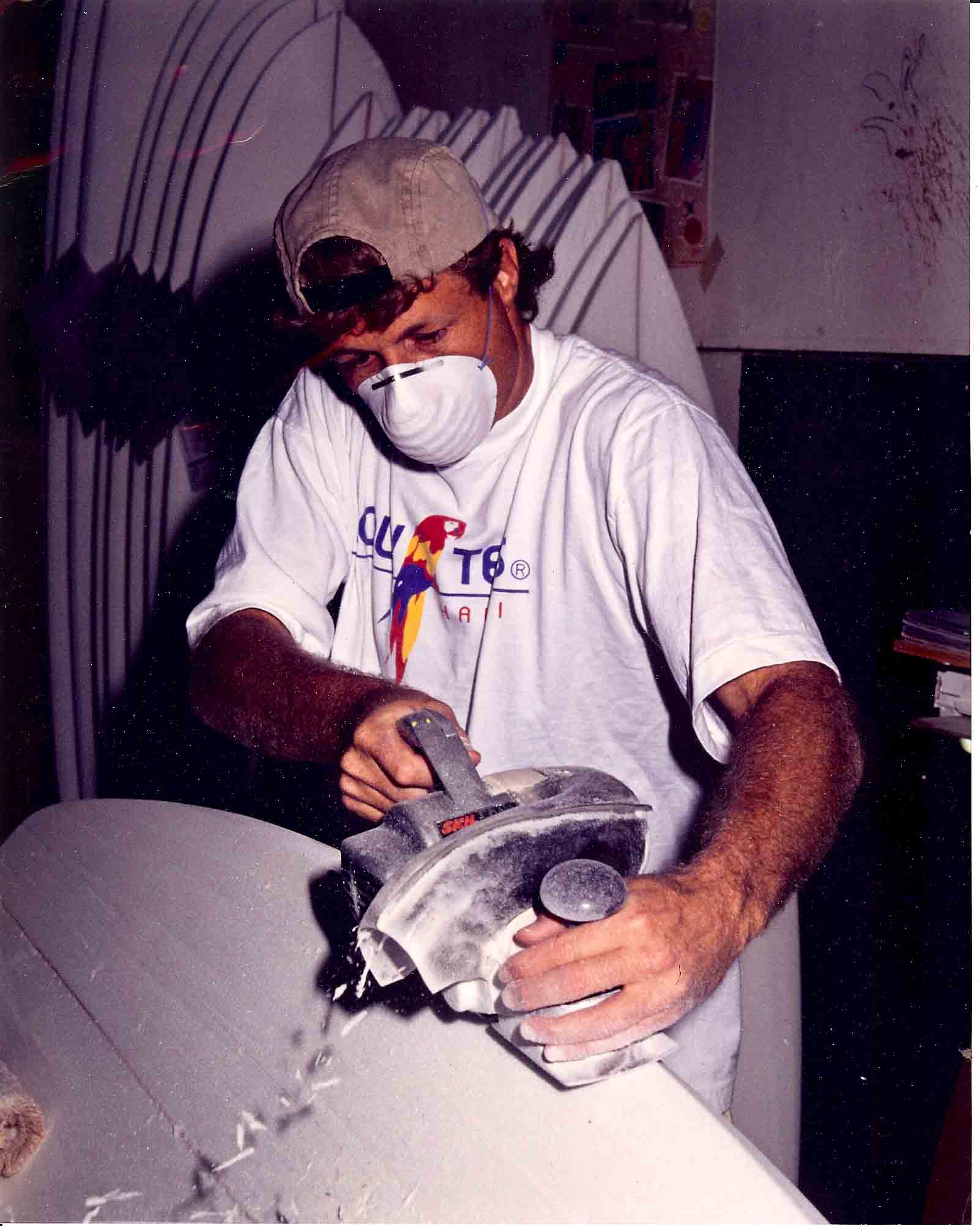 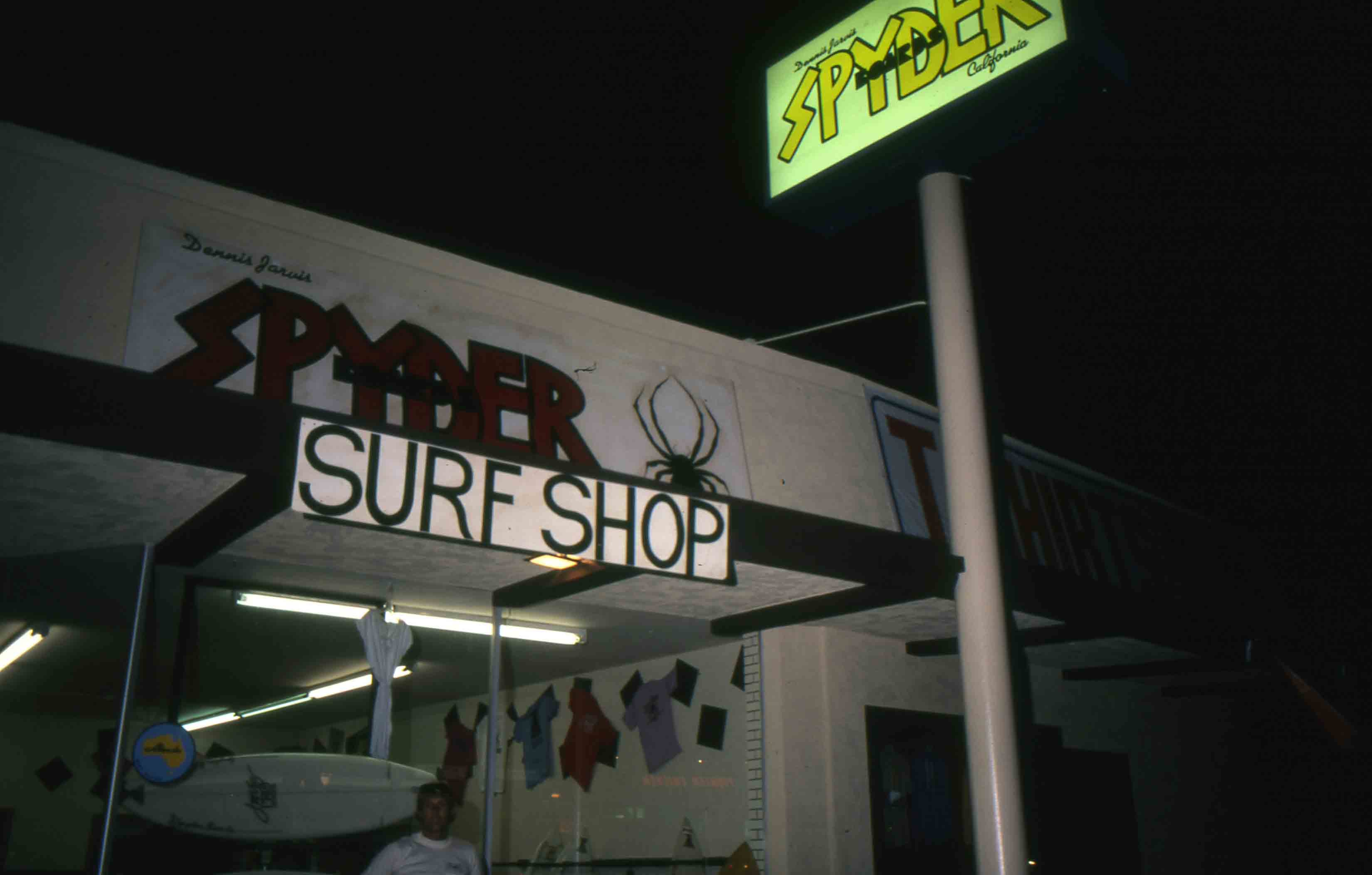 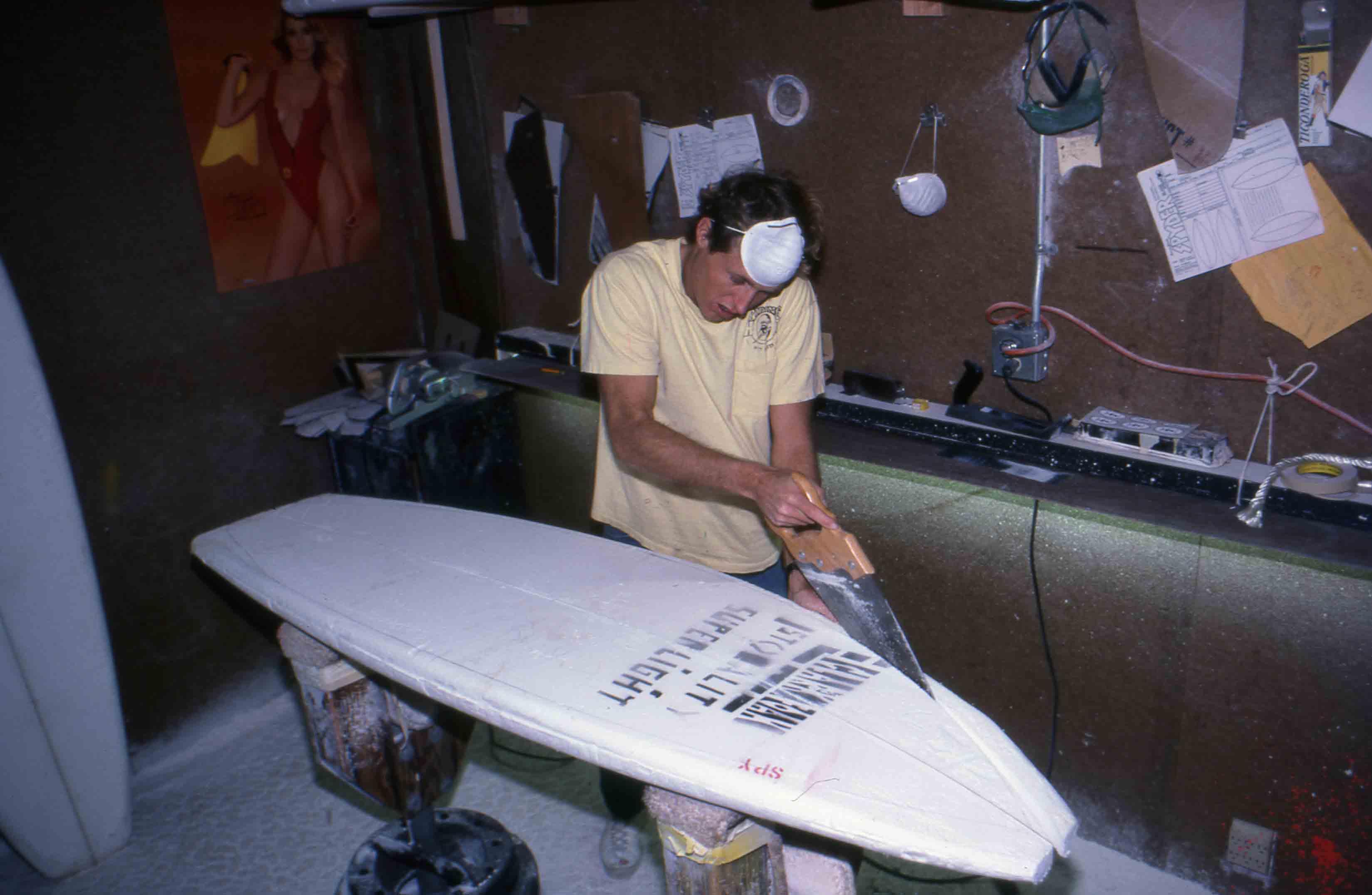 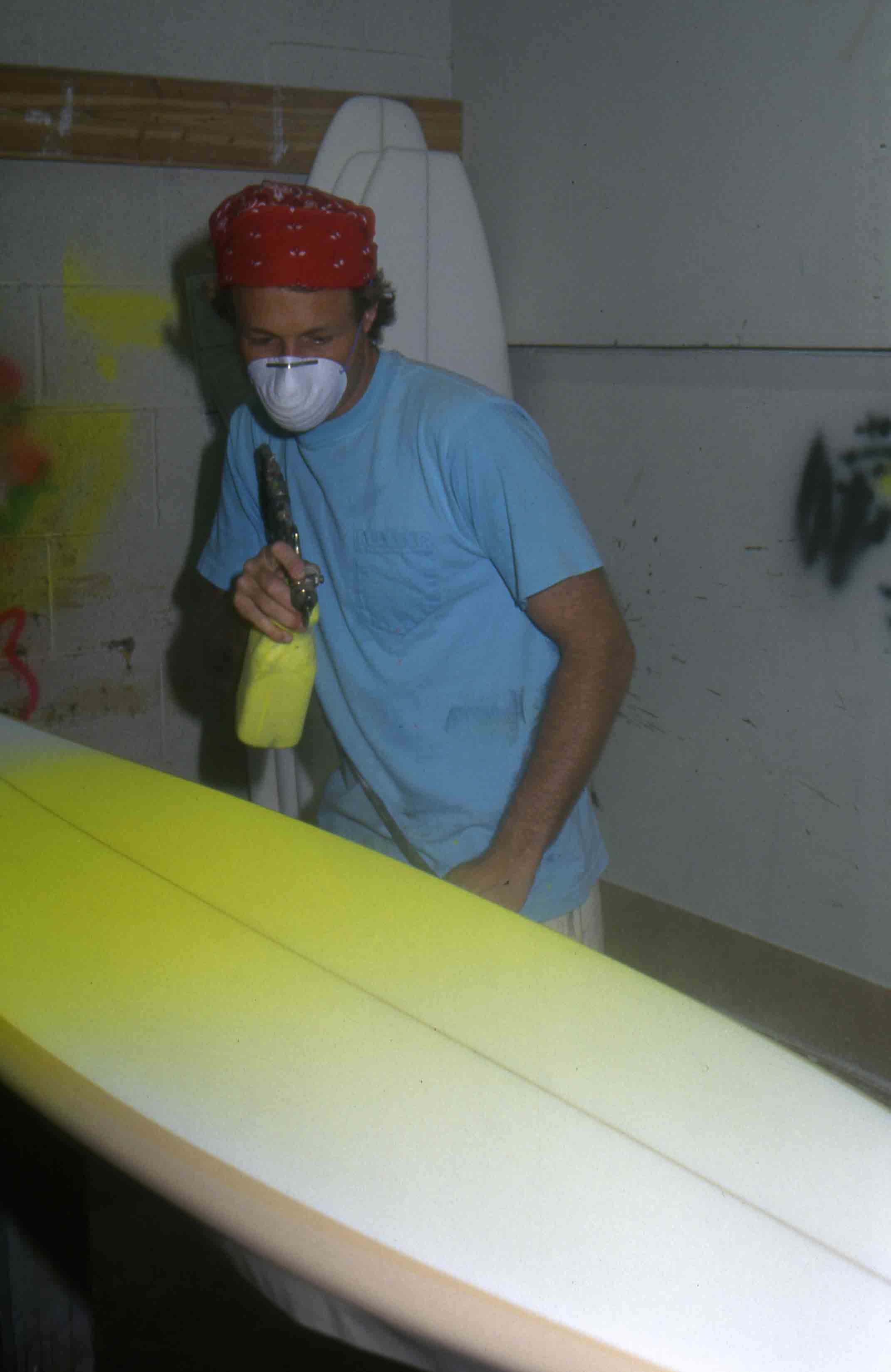 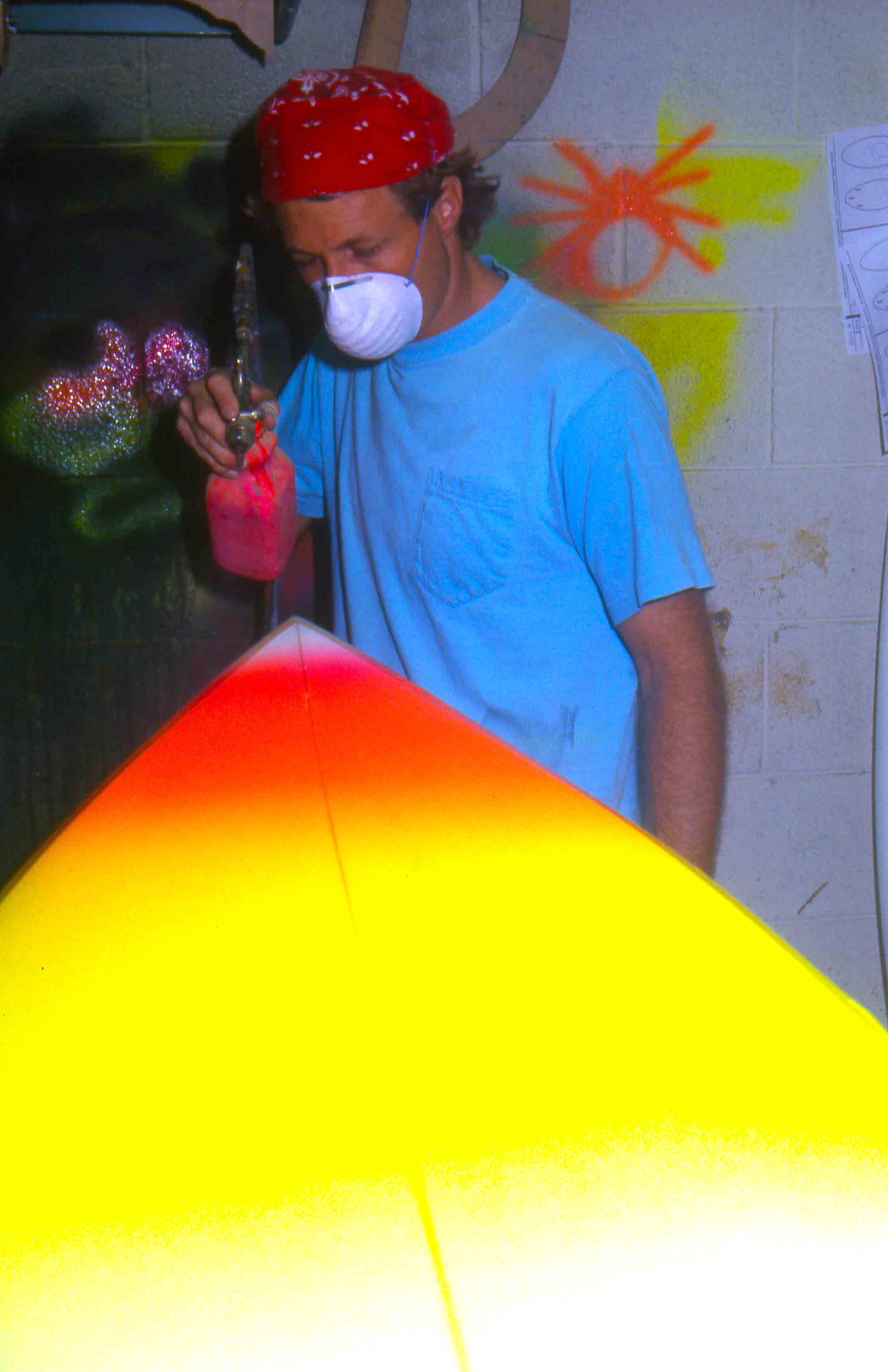 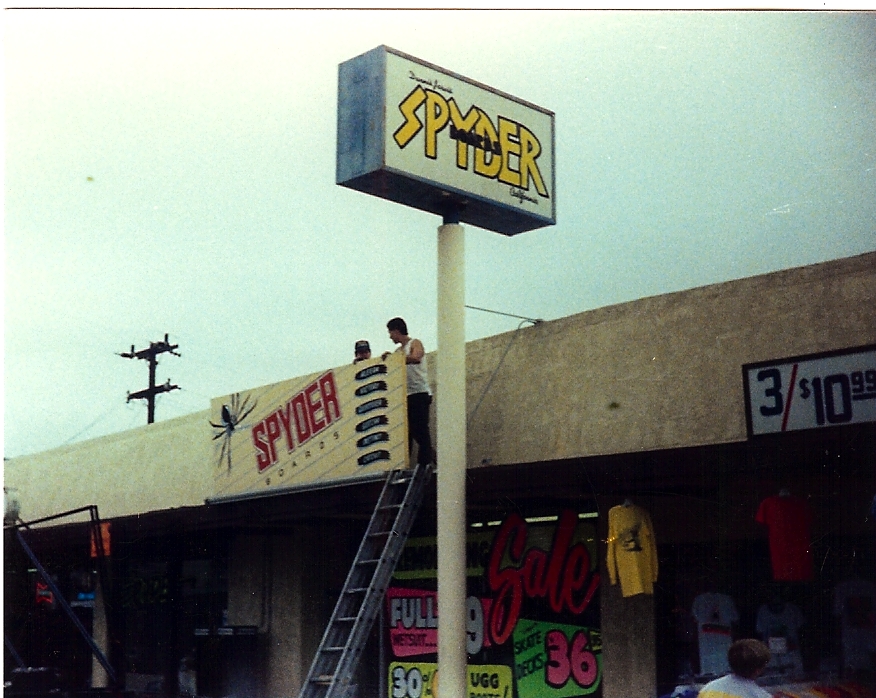 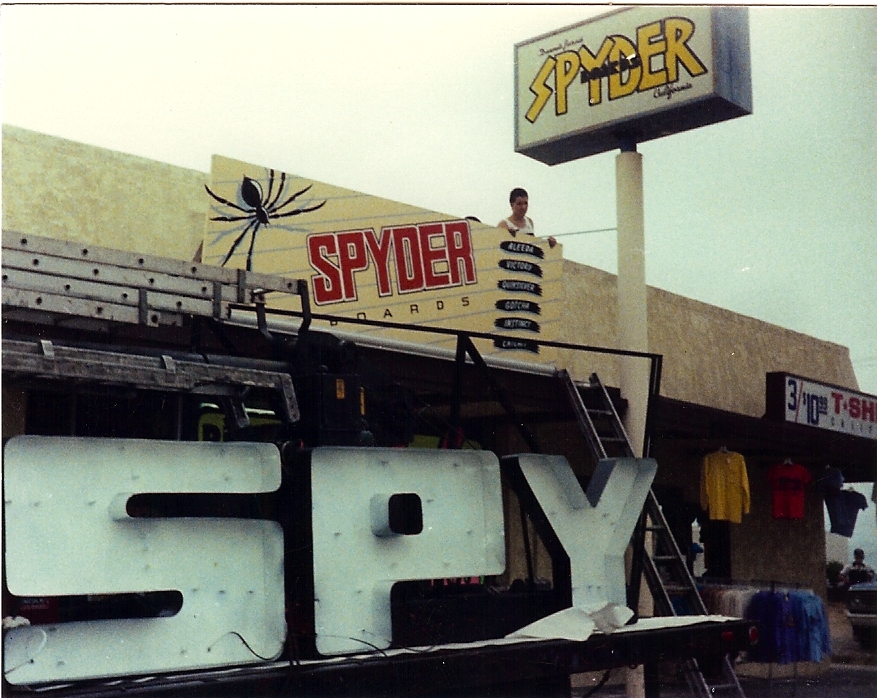 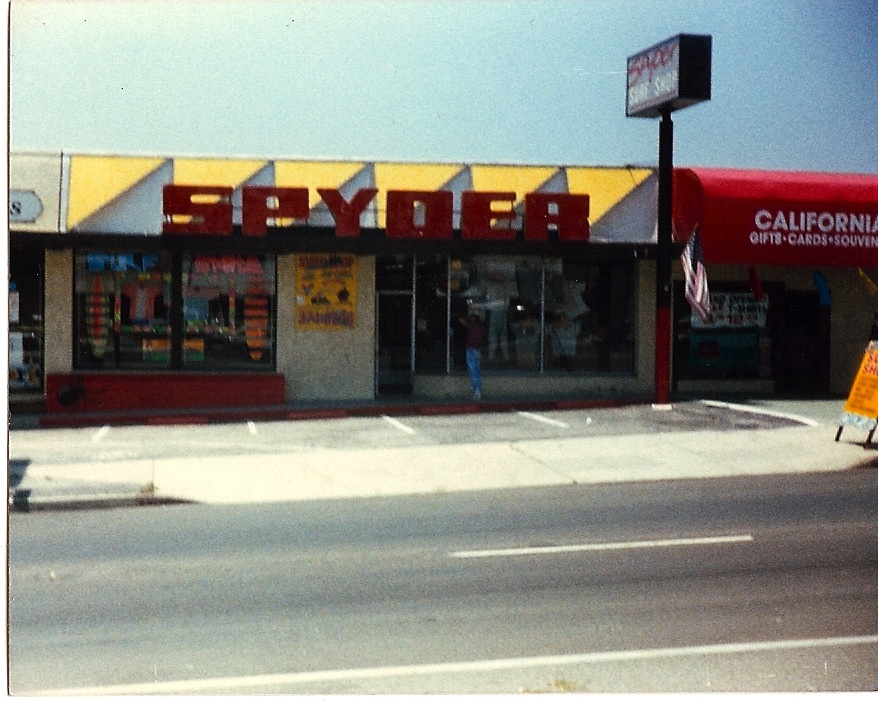 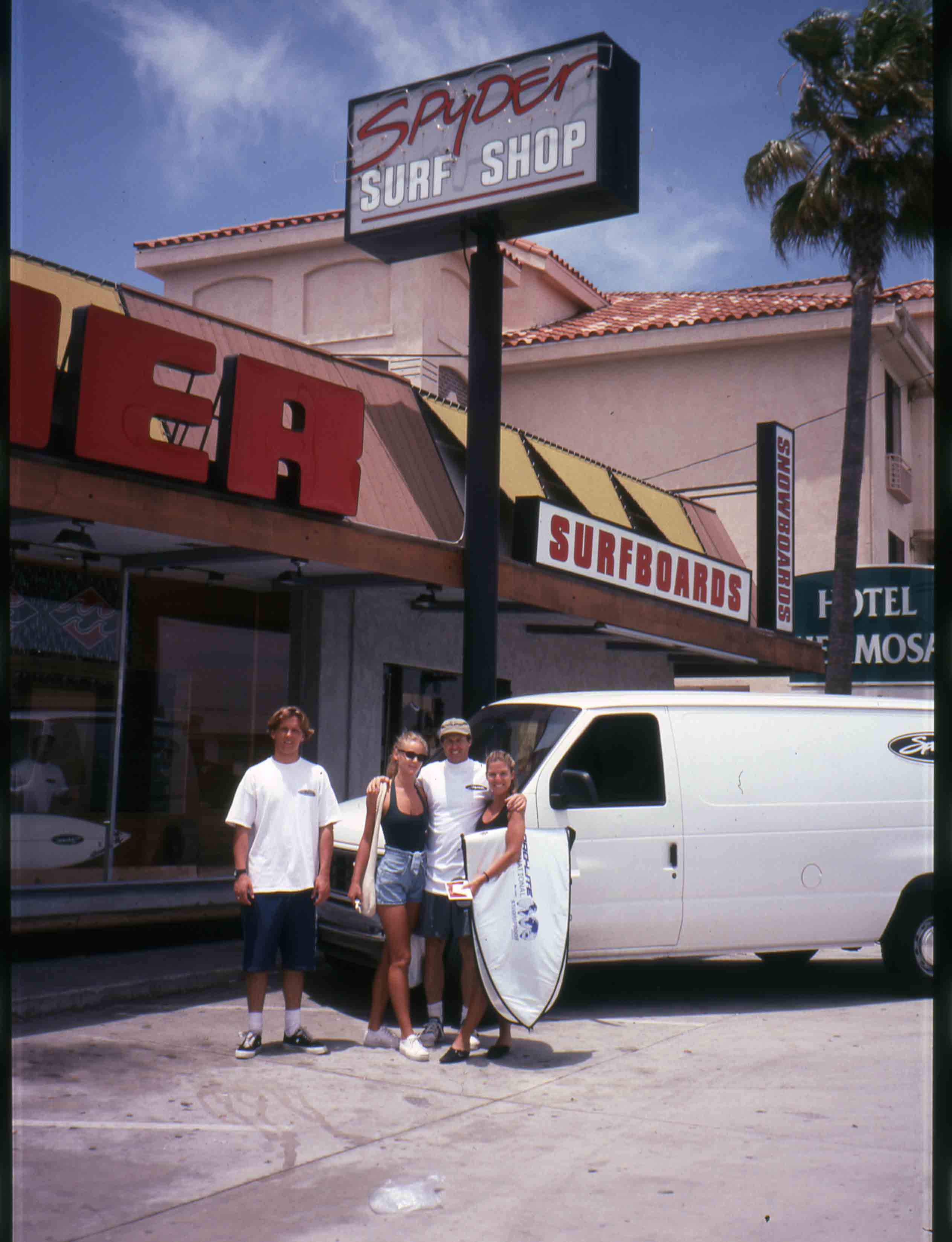 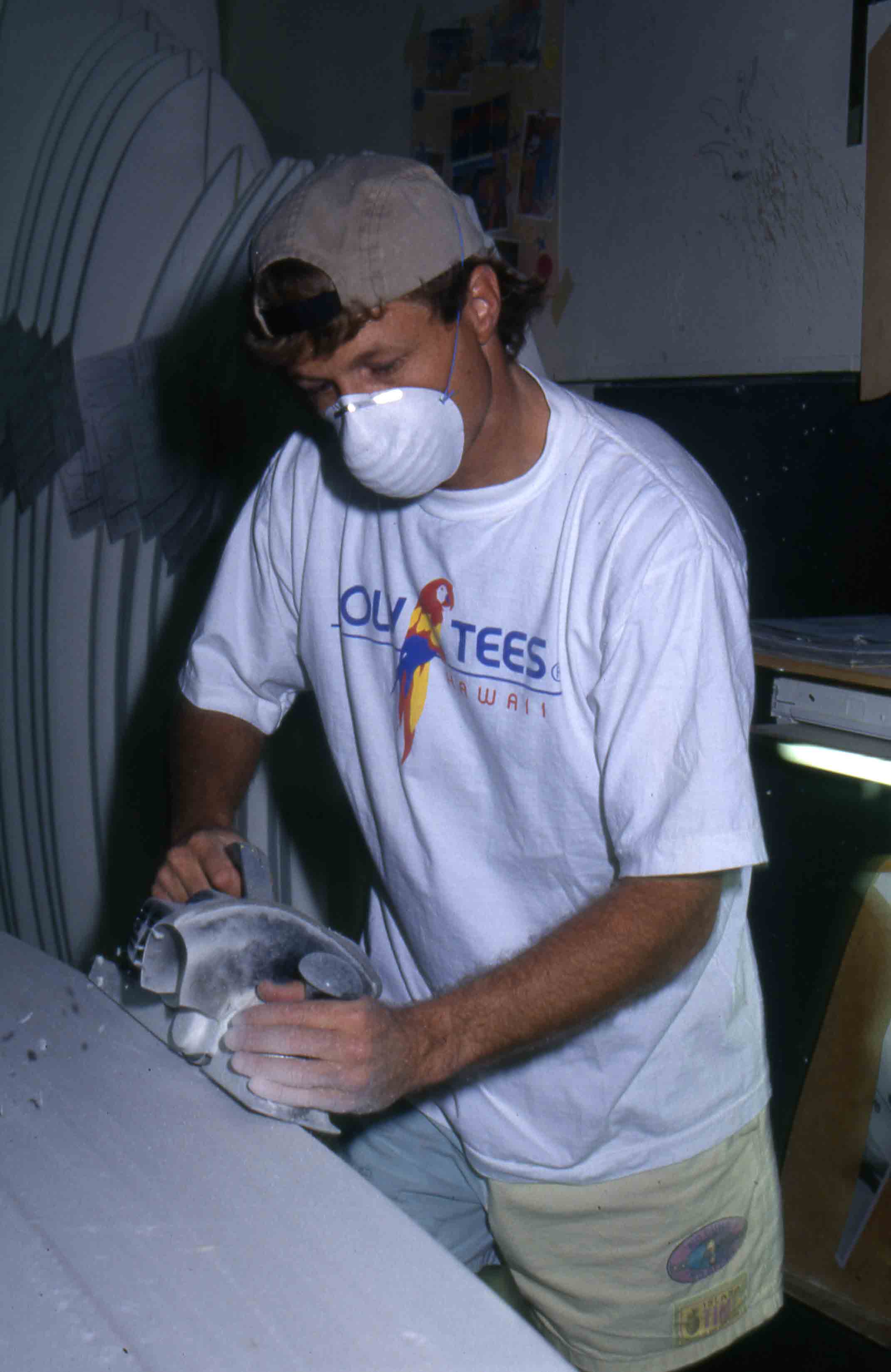 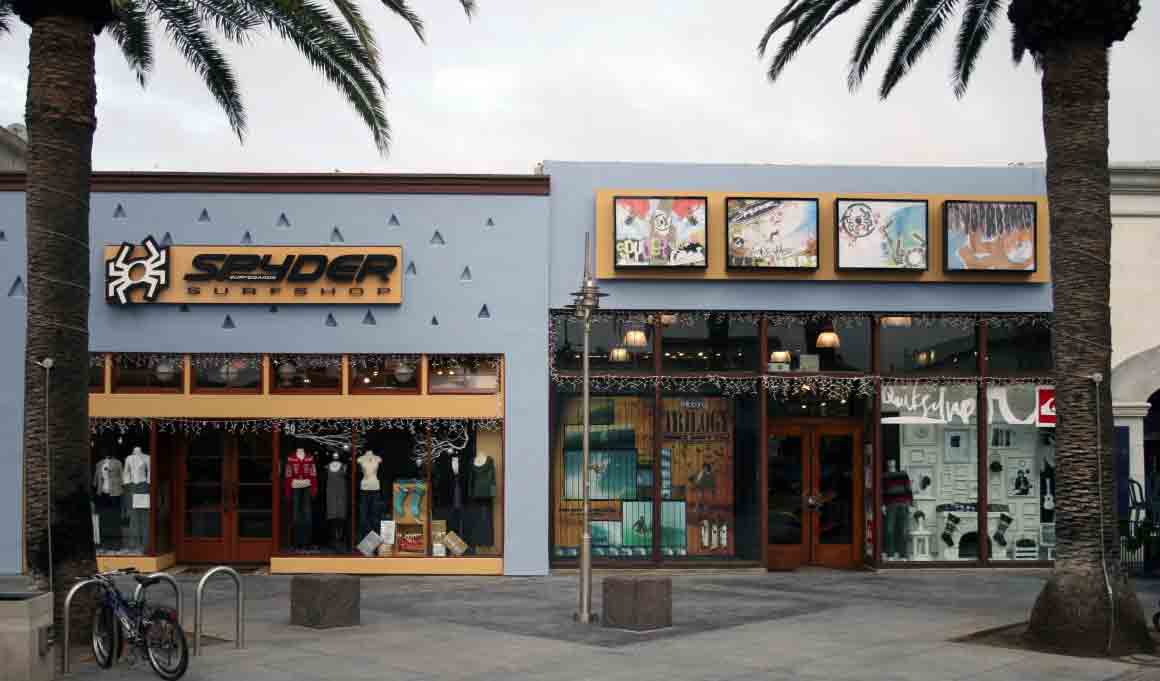 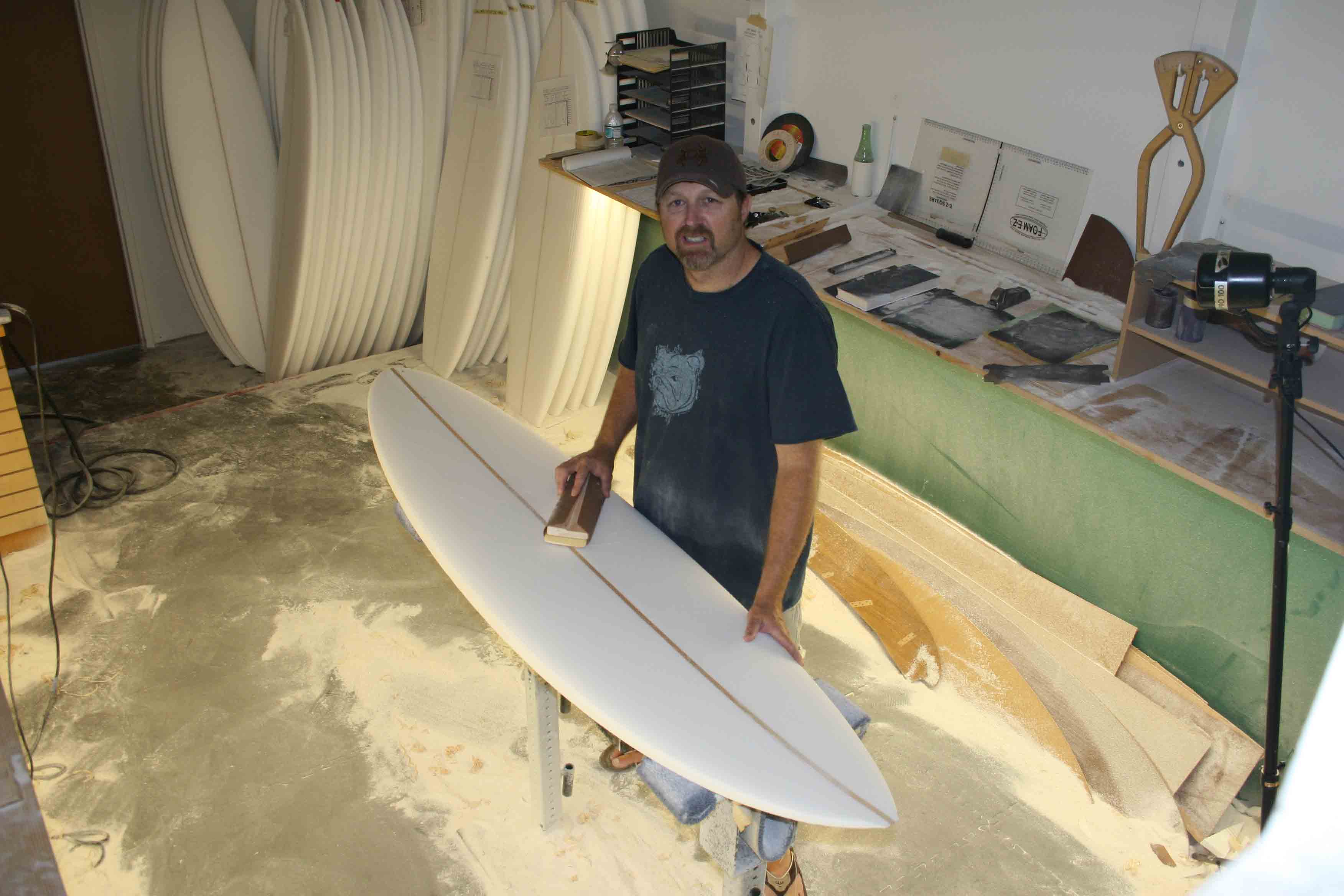 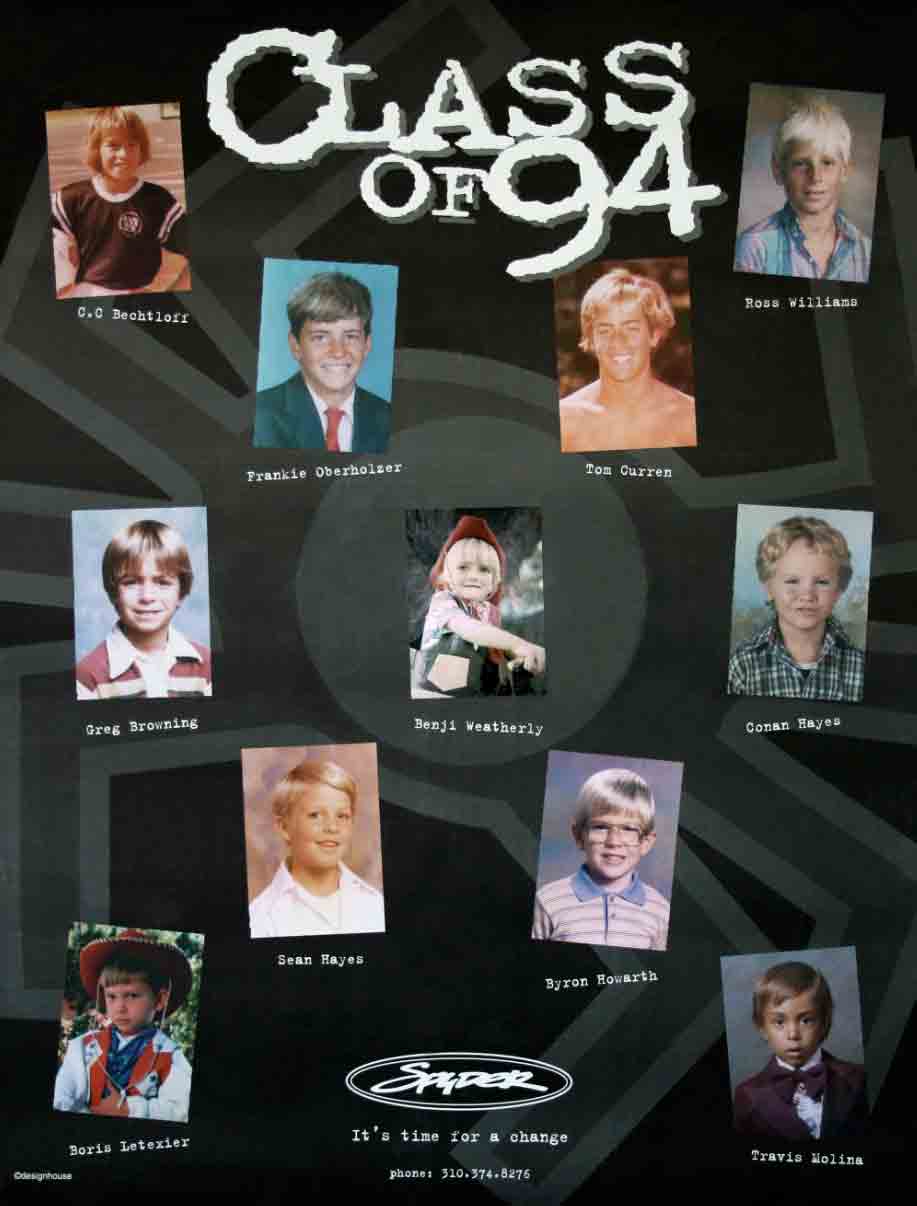 Which surfer had the biggest impact on your shaping?
Tom Curren, “back in the day” I had a deal with a guy that worked at the airport. I would get Tom’s boards shipped anywhere in the world for FREE! (before 9/11) and they would be waiting there for him when he arrived. The deal was set into motion through my “brother” Derek Hynd who had the vision to create “THE SEARCH” music and surf outreach for RIP CURL. Tom beat me in every event I surfed against him, but man I didn’t care because watching him do his thing…flow with the ocean in ways we all wish we could was such an experience. Out of nowhere, a wave would just “arrive” to him and he would slam it to the beach and smoke me like a brisket.  When Tom rode for SPYDER SURFBOARDS it was like a win for me. The best surfer in the world was finally riding my surfboards – yay me!

Which is the best board you have ever shaped back in the days? Who for?
Most folk are gonna say it’s my work with Tom Peterson and Tom Curren on the FIREBALL FISH design OR even the “Bohdi” surfboard for the Original POINT BREAK (I shaped all the boards and taught Keanu, Patrick, Anthony and Lori how to surf as well) but… I’m gonna have to say a killer little squash tail I made in 1995 for Amateur World Junior champ Ben Bourgeois. He was questioning our relationship and started to seek other shapers (other brands were offering him BIG BUCKS!). The contest was held at Huntington Beach and I knew I could fulfill his needs.  I spent about 4 hours studying his style (so Curren-esque) via my coaching videos.  Ben’s dad promised his pro career was with SPYDER SURFBOARDS so I had a mission. I spent 3 hours sculpting that wave craft and it was “perfect”. I didn’t place any logo’s on it but signed it “good luck Ben”. I drove it to his Hotel in Huntington Beach and left it in his room like a freaking EX-Girlfriend stalking her prey, felt real “Fatal Attraction” stuff—but I didn’t boil a rabbit— he rode it and won the event! However as the “boys” started making more money from other sponsors, he was tainted and actually started riding a different shapers boards, to his demise as he dropped out of the upper ASP level pretty quick… gotta stick with what works, right?

Which was the most important era for you?
I have had three iterations of my career:
70’s: where I had the pleasure of working with these top surfers: Chris Frohoff, Ted Robinson, Kelly Gibson, Allen Sarlo, Matt Warshaw and gained a reputation in California as a go to shaper.
80’s: where I actually focused on my self as a Pro Surfer/Top Shaper (which is really hard without an agent as you must walk a fine line of HUGE ego and truth, I must say that was difficult) But worked with some great Australian surfers, Derek Hynd, Richard “DOG” Marsh and a lot of top pros as they would travel though California for the contests. But I wasn’t looking to do the wholesale gig at that point because I was trying to build my own brand.
90’s: I saw a “chink” in the industry, The whole “Momentum” crew stayed at my Hermosa house as Greg Browning was my team rider and rented a room from me. One night, Donavan Frankenreiter was sitting on my couch and said he and Brad Gerlach were gonna stop riding for XANADU. At that time, The top 3 brands were RUSTY, CHANNEL ISLANDS and XANADU in California. I heard this and knew it was an opportunity for me. That week, Greg and I took Ross Williams out to the charthouse for dinner and made a proposition. His agreement with Blue Hawaii was coming to an end and Greg knew that we could assemble a great team. Ross was the first of the crew Greg helped get on board. That was 1994 – later that year Derek Hynd called me and said I should sponsor Frankie Oberholzer and Byron Howarth on THE SEARCH, didn’t even question it and did what he said. Then Tom Curren would snag Frankie’s boards and liked them so I drove to Arno’s pad (who played music with Tom) in Carlsbad and made a deal with Tom to ride for SPYDER SURFBOARDS. If it wasn’t for Taylor Steele, Derek Hynd and Greg Browing we wouldn’t have became who we are today!

Who is your favorite surfer from the 60’s-90’s and why?
60’s: Miki Dora – attitude, angst, irreverent.
70’s: Split Vote: Larry Bertleman / Mark Richards- same reason- “style” these guys had so much style and it was so different from all the rest (well Buttons? Liddell?) it was sick.  They just actually caused me to “feel” different, like emotionally, when I watched them.
80’s: No one will EVER be better than Tom Curren, he had Michael Petersons style but could do moves no other could do with ease of a “flick of the wrist”.
90’s: Kelly Slater – Trend setter, innovator, game changer.

Who is your favorite shaper from the 60’s-90’s and why?
60’s: Again split vote 3 way: Greg Noll/Hap Jacobs/Dale Velzy- these guys created the model that was and IS used today. They are – what Guttenberg was to the printing press, they were to the SURFBOARD manufacturing industry, Greg’s Factory was right here in Hermosa where he would blow his own blanks and shape and glass and ship around the world.
70’s: Max McDonald, even though he was a competitor brand, he had an “outside the box” thinking. He shaped for Kanoa Surf and I would check out Chris Barela’s boards and take outlines and bottom contours whenever possible.
80’s: Might be Rusty. He was a great artist that shaped for Canyon, saw and opportunity when he became a judge on the Pro tour and wrangled some top talent (Occy, Dave Parmenter etc..). His keen business sense and skill enabled him to reach outside of the shaping bay and build a HUGE brand around his “R” dot in much the same way Shawn Stussy did in the early part of the 80’s. I like people that take chances and can back it up with solid creations.
90’s: I actually liked the Ghost shapers Al Gibbons from CHANNEL ISLANDS and Rick Hammon from RUSTY. Yes the founders had the sizzle but these two would take the designs to another level, they tried harder.  I would see guys like Pat O’Connell’s boards from Hammon and be like WOW! Of course I would steal anything I really liked off the designs and implement into mine LOL.. still do “Good artists copy-great artists steal” Picasso.

Last words:
We gotta be careful. The imported surfboards that are made for less than a blanks and a pre-shape cut is going to kill our CRAFT and CULTURE if we do not do something about it. The flooding of the Surfboard market with inexpensive imports (China, Viet Nam, Thailand, Indonesia and other third world countries) will reach a pinnacle of over distribution in the near future and there WILL be a downfall of the Surfboard industry. I believe the Artisan shapers will have to fight against the “Import Mafia” who get their boards landed for $150.00+/- and can lower their prices as the “war” begins and they must get rid of “imported” inventory, that is when the preverbal crap will hit the fan! SO, Make a relationship with a local shaper and keep the manufacturing within your country, its patriotic wherever you live, be patriotic.